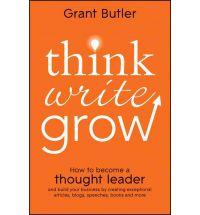 Become a thought leader to attract the best talent

Editors Note
: This is a guest post written by Grant Butler, founder and Managing Director of Editor Group – Australia’s top corporate writing firm, and a former journalist with the Australian Financial Review. His opinions are his own.

Imagine you had a choice of working for two almost identical companies. Both do similar work. They’re offering comparable money. But there’s a critical difference: one is led by a figure regarded as a top expert in your field. The other by a faceless senior manager: someone competent and respected, but essentially unknown.

Which job would you take? If you’re like most talented employees, you’d go for the firm with the high-profile expert. Why? Because smart people like to work with the best minds in their industries. Like an apprentice to a Michelangelo, they want to spend time in environments where they will continue to learn, be challenged and be inspired.

Firms led by genuine industry leaders also tend to win or pursue more exciting and challenging work at the cutting edge of their fields, and tend to have more prestigious brands. They’re the BMWs and Ferraris of their industries.

So, who are some Ferraris right now drawing in the brightest minds on the planet? Two of the most high profile are Apple and Google. Those firms are oozing bright people. So too is the fast-growing Australian software maker Atlassian. They all appeal to the best.

Or take the case of the carpet manufacturer Interface Global which has reorientated its whole business around environmental and economic sustainability. Indeed, its whole mission statement is: ‘To be the first company that, by its deeds, shows the entire industrial world what sustainability is in all its dimensions – People, process, product, place and profits’. Carpet may not be sexy but if you work in that industry and care about its impact, Interface is likely to be at the top of your career plan.

Here in Australia again, a law firm like Gilbert + Tobin has grown to become an elite player over 20 years by doing breakthrough work and attracting more and more brilliant lawyers. It has become the first firm to break into the tiny group of Australia’s ‘top tier’ firms in more than half a century.

What these organisations have in common is that they are all thought leaders in their fields, and many have a very specific thought leader at their helm like Apple did with Steve Jobs and Google does with the brilliant engineer Larry Page.

How to telegraph your expertise

Not everyone is a Jobs or a Page, but it’s certainly possible to show that you and your organisation are a leader in your field. They key is to increase your communications. I’ve recently completed a book looking at thought leaders and how they communicate, especially in writing. One of the most fascinating figures I interviewed is a Silicon Valley designer called Nancy Duarte.

For almost 20 years, Duarte was a leading American designer specialising in the niche area of presentation slides (think Keynote for Macs and PowerPoint for PCs). She also worked with huge clients, including Al Gore, Cisco and HP. Even so, a client rang her one day and asked her to refer him to the best slide designer in America. That’s me! she said, but also realised that she needed to get the message out.

Duarte’s response was to write everything she knew about slide design into a 275-page full-colour book, complete with extensive visual material, called Slide:ology. The book was both a technical guide and a call to arms for better slide design (to save us all from ‘death by PowerPoint’). The book has gone on to sell more than 50,000 copies but, most importantly, has transformed her agency in two key ways.

First, the book and Duarte’s related public communications helped her take slide design from being an obscure and unappreciated area of graphic design and make it cool. Second, it made Duarte a leading choice for designers wanting to work in that field.

As Duarte says, “The book has helped bring in fantastic designers and writers. This medium is usually reviled by trained graphic designers and considered beneath a ‘real designer’. Now we get wonderful portfolios in with comments in the cover letter like, ‘I want to work in the hottest design medium today!’ – what a turnaround!”

This success in attracting talent has since had a self-reinforcing impact on the growth of Duarte Design, which has doubled in size from around 50 to more than 100 staff since 2008. It has also launched a training arm focused on sharing its expertise.

If you want to replicate the success of organisations like Duarte Design, Gilbert + Tobin and Google, it’s essential to telegraph your expertise and position yourself as a thought leader in your field. You can do that every day with your team and by increasing your communication through blogs, books, speeches, videos, the media and other outlets.

Get ready to change the world

Finally, to really succeed as a thought leader and make your presence felt in the market, be prepared to have a point of view and to advocate for positive change. People want to work for and learn from experts, but they get excited about changing the world – even if it’s one presentation slide, legal case or carpet tile at a time.

Grant Butler is author of the new book Think Write Grow: How to become a thought leader and build your business by creating exceptional articles, blogs, speeches, books and more (Wiley 2012). He is also founder and Managing Director of Australia’s leading corporate writing firm Editor Group and a former journalist with The Australian Financial Review newspaper. Grant is also the founding editor of PSF Journal, a magazine for partners, marketing and business development teams at professional services firms.

8 Hiring Stories You Couldn't Make Up Even If You Tried
Employer branding: Be bacon, not white bread
Employee Retention: Beyond the Honeymoon Phase
Recap: In-house Recruitment LIVE! London 2017
Which Fictional Boss Are You? [Infographic]
How Leadership Teams Can Encourage Knowledge Sharing and Collaboration