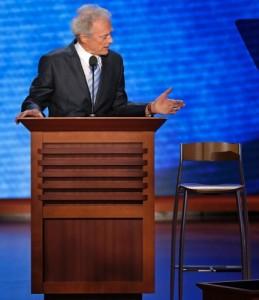 As a (recovering) political junkie, I’ve been keeping an interested watch on the US Presidential elections.

Without a doubt, the highlight so far came on the opening night, at the Republican National Convention. Clint Eastwood gave a rambling, confused speech endorsing Mitt Romney, which seemed to set the tone for the weeks ahead.

Clint’s bizarre monologue, sans teleprompters (he is said to despise them), had him conduct a debate with an empty chair, which apparently represented Obama. It went for nearly double the allocated 7 minutes, and left Romney’s aides scratching their heads and dodging responsibility.

The performance was widely panned, and sparked a hilarious meme of #eastwooding (hint: lots of empty chairs).

Importantly, it led to serious questions about Mitt Romney’s judgement in making the selection.

Digging into the situation, it’s clear Romney made some rookie recruiting mistakes, which are unfortunately all too common across any role. Don’t make these mistakes in your business, even when it’s not the Presidency at stake!

1. Relying on experience rather than suitability

Clint Eastwood is a legend in Hollywood. A fantastic actor and director, he commands respect from all corners. The Romney camp seem to have assumed that experience and respect would automatically inject some Hollywood style fan-fair into the campaign launch. They were wrong.

Pro-tip: A candidate’s experience is worthless if not suited to the role.

The New York Times reports that Romney invited Eastwood to speak after the actor gave him a ‘gravelly, full-throated endorsement at a star-studded fundraiser’ earlier in the summer. It seems even Presidential candidates aren’t above flattery:

“He just made my day. What a guy,” Mr Romney joked with his donors that night

This led to a coordinated effort from Romney’s team over several weeks, to woo Eastwood and inject some Hollywood-style surprise into the campaign launch.

Pro-tip:  It helps if a candidate likes you, but it doesn’t make them right for the job.

Prime-time political moments are as intricately scripted as any Hollywood movie. In this case, someone forgot to tell the star. Eastwood was off-message, providing little coherence with other speeches on the night, and the overall themes of the campaign. While this was amusing to those of us who crave some surprise in the political theater, it was a wasted opportunity for Romney.

Romney advisers so trusted Mr. Eastwood, 82, that unlike with other speakers, they said they did not conduct rehearsals or insist on a script or communicate guidelines for the style or format of his remarks – New York Times

Pro-tip: Make sure your candidates fully understand the goals, objectives and requirements of the role.

At the last minute before coming on stage, Eastwood somehow convinced the prop person to let him drag out a chair (but seriously, could you imagine anyone trying to say no!). It was an unscripted move that left aides watching in puzzlement. At 82, they probably thought he’d be sitting in it.

However, once the theater began, they had no way of controlling the damage. A red light was flashing to indicate the 7-minute time limit, but Eastwood ignored it, like an over-enthusiastic best man at a wedding.

Pro-tip: Keep a close eye on new hires, until they’ve proven themselves on the job.

To judge for yourself, here’s the full video. Would you have hired Clint Eastwood?

Recruiter Tips: The Importance of Objective Evaluation
21 Ways To Be A LinkedIn Lemon
Creative Keystones to Building the Best Team
How To Attract The New Breed Of Job Hunter With Your Job Ad
6 Ways to Ensure Your Recruitment Process Doesn’t Slow Down Over Summer
10 Questions to Consider Asking During a Candidate Interview