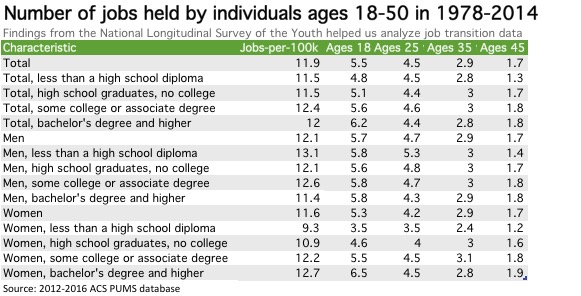 In just a few short weeks, thousands of new college graduates around the country will wake up the morning after their celebrations and be faced with a daunting, yet hopeful question – now what?

Well, person who has suddenly been thrown into the obstacle course that is navigating your 20s and life in general, you can expect some job turnover in your future.

Recent data from the Bureau of Labor Statistics shows that individuals born in the latter years of the baby boom (1957-1964) held an average of almost 12 jobs from the ages of 18 to 50, with nearly half of those jobs held between 18 and 24.

Analyzing the Bureau of Labor Statistics’ recent study on the National Longitudinal Survey of the Youth 1979, we wanted to focus on the amount of job transitions the average person experiences at different points in their life.