Research Summary. Historic unemployment statistics reveal that the United States had undergone numerous boom-and-bust cycles when GDP (and often the stock market) dived, and a greater number of people looked for work. The most recent historic drop occurred during the COVID-19 pandemic between 2020 and 2021. 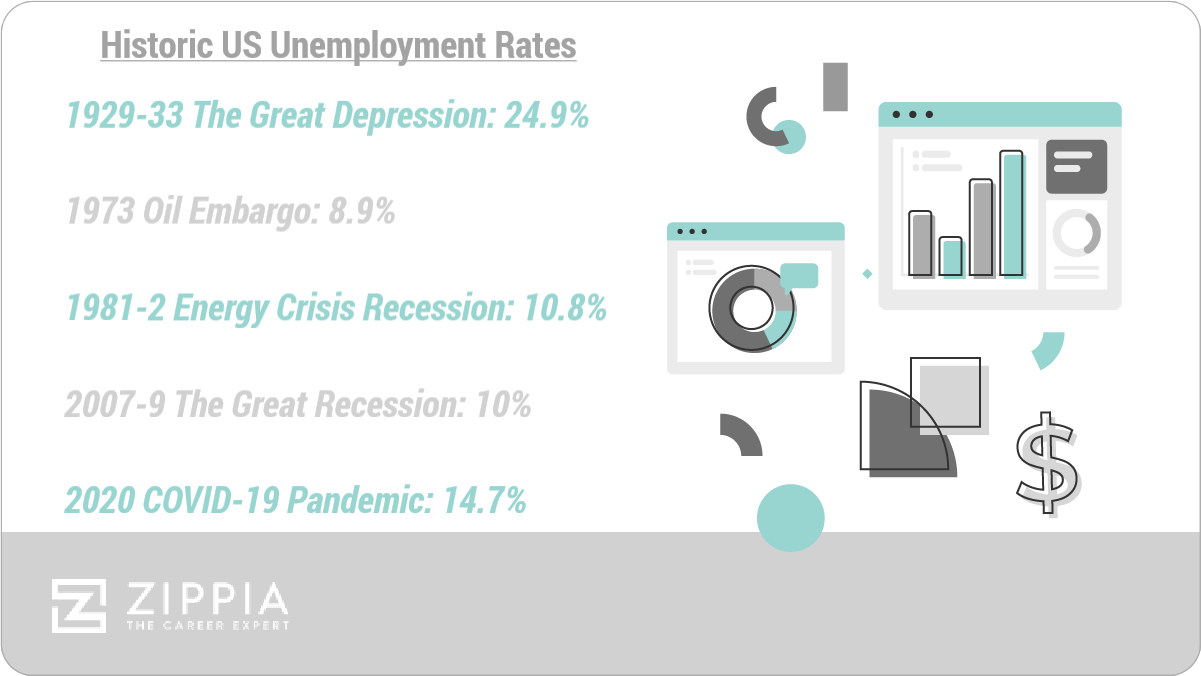 The Great Depression was an economic downturn that began in August 1929.

However, it wasn’t until October 24, 1929, that the stock market crashed (known as “Black Thursday”), and stock prices fell 22% over four days. The Great Depression lasted until 1933.

While it originated in the U.S., the Great Depression’s ramifications (e.g., declines in output, high unemployment, and severe deflation) were felt worldwide, mainly due to the gold standard. During this time, industrial production declined 47%, gross domestic product (GDP) fell 30%, deflation hit 33%, and unemployment skyrocketed to 24.9%.

To date, it remains the most prolonged and most severe depression ever experienced by the world.

In 1929, the U.S. economy boasted full employment, although it reached max unemployment just four years later in 1933. Here’s a timetable outlining unemployment rates during and after the Great Depression: 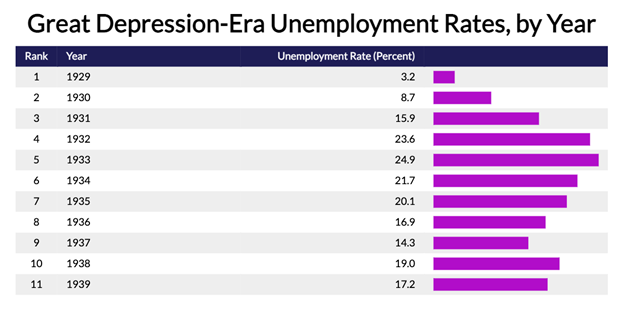 Unemployment during the Great Depression often lasted longer than one year.

Not only were out-of-work individuals often job hunting for many months during the Great Depression, but those who had jobs frequently experienced involuntary part-time employment.

The banking industry was hit especially hard by the Great Depression.

After four consecutive waves of banking panic between 1930 and 1932, one-fifth of the banks in existence failed, leaving many in the industry out of work. In total, nearly 11,000 banks closed their doors between 1929 and 1933.

For this reason, agriculture, farm, construction, manufacturing, and factory workers were unemployed more often and for greater periods than higher-skilled workers during the Great Depression.

As a result of the Great Depression and the massive, lengthy unemployment left in its wake for many Americans, President Franklin D. Roosevelt signed the Social Security Act into law on August 14, 1935.

Among other things, the Act created a Social Security safety net for individuals aged 62 and older and established unemployment insurance, old-age assistance, and aid to dependent children.

The U.S. unemployment insurance program is supported by levying a combination of federal and state taxes upon employers and depositing the money collected into an Unemployment Trust Fund, which is then disbursed to citizens in need.

In February 1966, the U.S. unemployment rate fell below 4% while annual growth topped 6%.

But by the fall of 1973, unemployment climbed to nearly 9%, and GDP declined by 3.4% due to the OPEC oil embargo, price and wage freezes, and a global stock market crash, during which oil prices increased four-fold and consumers slowed their spending habits.

After emerging from another recession just a year earlier, the energy crisis recession between July 1981 and November 1982 occurred in response to strict monetary policies that raised interest rates.

While these slowed the economy and kept inflation in check, GDP dropped to 3%, and unemployment soared to 10.8%. 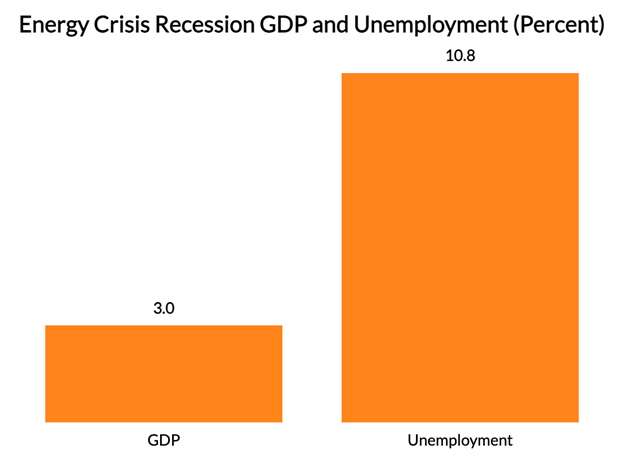 From the mid-1990s to 2001, the new Internet sector rapidly grew, along with its related high-tech industries.

Fueled by an influx of venture capital money, high-paying job opportunities soared in Silicon Valley, causing unemployment to fall to 4%.

And people looked beyond traditional employers as a source of income as well: by the spring of 1999, one in 12 Americans surveyed said that they were in some stage of founding a business.

However, the bubble burst swiftly as the NASDAQ lost 34.2% of its value between March and April 2000, alone. By October 2002, it had lost 73% of its value and wouldn’t reach similar levels again until March 2015. 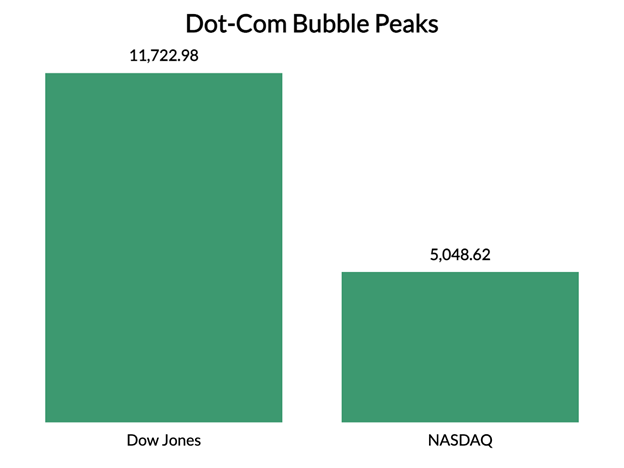 When the dot-com bubble burst, unemployment reached a peak of 5.5%.

The short recession that followed the dot-com bubble dipped GDP only 0.6% and caused unemployment to reach 5.5%. However, in Santa Clarita, CA (the home of Silicon Valley), unemployment reached 7% by the end of 2001.

Silicon Valley high-tech employment declined by about 17%, or about 85,000 jobs, following the peak of the dot-com boom. However, average wages grew by nearly 36%.

One of the more recent recessions began in December 2007 and ended in June 2009, known as the Great Recession. During this time, the U.S. GDP fell to 4.3%, unemployment peaked at 10.6% in January 2010, and the number of unemployed increased by 8.8 million.

This period also saw much higher levels of unemployment that persisted longer than in any other, dating back to the late 1940s.

Men’s unemployment rates during the Great Recession were generally higher than women’s.

Beginning in the early 1980s, unemployment among men outpaced unemployed women. And this trend continued during the Great Recession when men’s unemployment rates were more than a whole percentage point higher than women’s.

Black workers experienced the highest peak unemployment rates compared to other races during the Great Recession, although there was almost a six-point difference between Black men and women.

Here are the Great Recession peak unemployment numbers by gender and race:

Peak unemployment during the Great Recession was highest among younger demographics.

Individuals with less education experienced higher unemployment rates during the Great Recession than those with more education.

Not all states experienced the same unemployment rates during the Great Recession.

Following the Great Recession, states like North Dakota, Nebraska, and South Dakota had unemployment rates at 5.2% or lower, whereas Nevada, California, and Michigan had much higher rates at 10%.

The construction and manufacturing industries were hit with the highest levels of unemployment during the Great Recession.

It’s common for goods-producing industries to encounter significant employment dips during recessions. The Great Recession was no different, where construction employment declined by 13.7% and manufacturing declined by 10%. 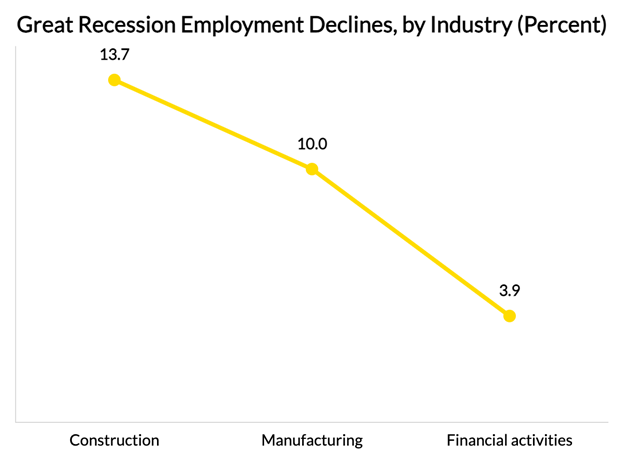 Many more businesses closed their doors than opened during the Great Recession.

When a business closes or opens, it’s classified as an “establishment death” or “establishment birth,” respectively. During the tail end of the Great Recession, 235,000 establishments closed while only 172,000 opened (a low since data started being recorded in 1992), leaving many workers unemployed.

With so many businesses closing their doors, mass layoffs became the new normal.

A mass layoff occurs when at least 50 initial claims for unemployment insurance are filed against an establishment during a consecutive five-week period. During February 2009 alone, employers took 3,059 mass layoff actions that left more than 326,000 employees out of work.

But following the Great Recession, employers didn’t start adding jobs until 2010. It also took until 2014 for the economy to recover the millions of jobs lost, and the unemployment rate did not fall to 5% until late 2015.

By 2019, the U.S. experienced historically low unemployment rates, with the jobless rate at 3.5% for both men and women, the lowest rate in 50 years.

The economy had also grown for 126 months, which was the longest economic expansion on record until the COVID-19 pandemic struck.

5.8 million people were unemployed during the fourth quarter of 2019, which was a reduction of 341,000 compared to one year earlier. Over this same time, the national unemployment rate fell to 3.5%, the lowest jobless rate since 1969.

However, labor force participation rates were stuck at their lowest level since 1977.

Despite record-low unemployment, the labor force participation rate remained at 62.9% during this time, near its lowest level since 1977. This was primarily caused by thousands of individuals who gave up actively looking for jobs and were therefore no longer tabulated as ‘unemployed.’

By April 2020, as businesses started feeling the full force of the COVID-19 economic downturn, the unemployment rate skyrocketed to 14.7%.

This was the largest one-month increase in history and left 20.5 million Americans without a job.

Total unemployment claims skyrocketed to more than six million per week during the first two weeks of April 2020.

Between the beginning of April and June 2020, more than 36.5 million people filed initial unemployment insurance claims.

The retail and foodservice industries were hit hard during the COVID-19 pandemic.

At the onset of the pandemic, retail and foodservice sales plummeted by more than 16%, leaving many in the industries without reliable work.

This stands in contrast to the Great Recession, when the unemployment rate for women peaked at 9.4% in July 2010 compared with a peak of 12.3% for men in January 2010. 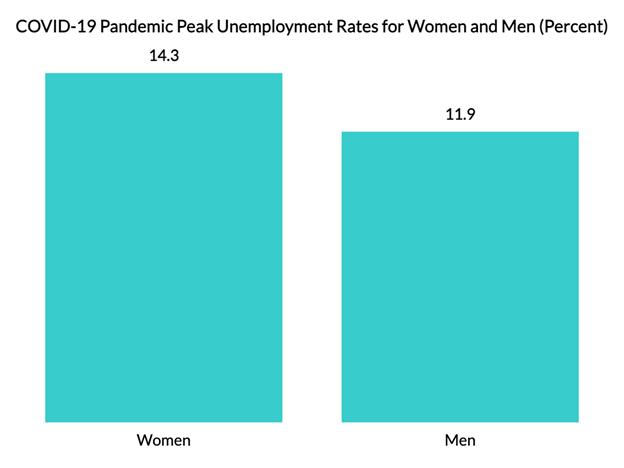 As was the case during the Great Recession, Black women and men experienced higher unemployment than other races during the COVID-19 pandemic.

Here are the numbers comparing February 2020 with peak unemployment during May 2020 of the COVID-19 pandemic:

Younger workers aged 16 to 24 experienced meaningfully higher levels of unemployment in May 2020 than those in older age brackets.

In some instances, unemployment rates for this age group were more than double those of other groups. Here are the numbers by age:

Furthermore, the less education an individual had in May 2020, the more likely they were to be unemployed.

Here are the peak (May 2020) unemployed workers due to COVID-19, by education:

How does the U.S. define unemployment?

The U.S. Bureau of Labor Statistics officially defines unemployment as “people who are jobless, actively seeking work, and available to take a job.”

How does the U.S. determine unemployment rates?

The U.S. determines unemployment rates as a percentage of the labor force by adding the number of employed and unemployed.

When has the U.S. experienced record periods of unemployment?

What goes up must come down, whether it’s the stock market or unemployment rates, and we can see that the U.S. has weathered many up-and-down cycles since the Great Depression. Only time will reveal how long the current era lasts.