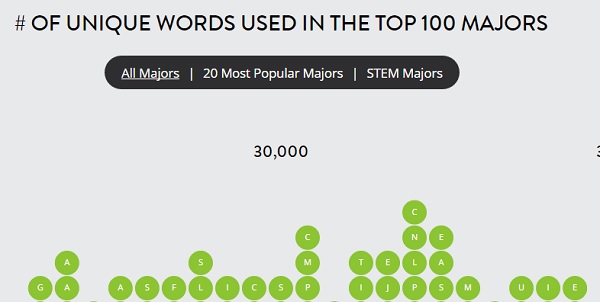 The College Majors With The Largest Vocabularies

by Chris Kolmar
Guides - 4 years ago

Copied!
Embed Graphic or go full screen (recommended for playing with it). Some code adapted from Amelia Bellamy-Royds

Coming out of college as an economics major, one of my first jobs was as an analyst in a healthcare consulting firm. I was excited to get started looking for fraudsters that were charging for more procedures in a day than were physically possible.

I wasn’t expecting to be hit with an entirely new language in the process. But that’s what happens when you enter a new field — you have to pick up on the lingo.

In my particular case, I received a crash course in healthcare jargon. Everyone talked about “benes” (beneficiaries), their “codes” (Medicare and Medicaid treatment codes), and their “outcomes” (How patients fared based on the treatment received).

From there, I moved into real estate and online marketing with two new sets of languages to learn. Throw in some coding over the past couple of years and my resume is now filled with acronyms and words like AVM, closing costs, SEO, SqL, UX, and A/B Testing that I’d never heard of in college.

I’ve only been out of school for seven years and I’ve learned what’s probably the equivalent of another language.

All this got me thinking — which majors in college can expect to learn the biggest vocabulary during their career?

And, as luck would have it, we just finished processing over 2 million resumes with this exact data.

10 Majors With The Largest Vocabulary Size

The Major With The Biggest Vocabulary – #1 – Physics

I guess the language section of the SATs might matter a bit more for Physics majors than you’ve been conditioned to believe.

My lawyer dad always says something can’t be more unique than something else, but I’ll make an exception for physics. Of the almost 40,000 unique words found on physics majors’ resumes, 14.5% of them were not found in any other major’s resumes. And while some of the more popular unique words reference famous physicists, companies, or labs, we are also left with gems like:

For those playing at home, here’s a quick excerpt from Wikipedia on Polytrope (not to be confused with polytope, obviously):
In astrophysics, a polytrope refers to a solution of the LaneâEmden equation in which the pressure depends upon the density in the form P = K \rho^{(n+1)/n}

After having fun looking into words unique to physics, it dawned on me that many of the majors with the biggest vocabularies are STEM majors. That was in stark contrast to what I expected going in — I figured the psycho-babble of Psychology would end up in the number of one spot.

The Most Popular Major – #41 – Psychology

Apparently psycho-babble has a relatively limited scope of vocabulary as Psychology only ranks 41 out of the top 100 majors. Only about 7% of the words found on psychology major’s resume are unique to their careers.

What Psychology does show is how standard words are across all industries — for the most part there’s at least another person coming from some other major with a career experience similar to yours. Psychology embodies this finding because so many psychology majors go into fields that have (relatively) little to do with Psychology. You can be anything from a researcher to a real estate agent to a marketing manager.

And the statistics play that out as Psychology has the second lowest percent of words unique to the major, only the synergizers in “Business administration and management” have a more boring set of language.

Analyzing A Whole Lotta’ Resumes — The Data And Methodology

The core of the Job Graph on Zippia applies machine learning algorithms to a dataset of over 2 million resumes, and counting, to determine common career paths for people with similar backgrounds. In my case, I wasn’t so much interested in what people do in their careers; I wanted to see the pure size of the vocabulary people with the same major learn over the course of their career.

To do that, I performed a token analysis on the resumes of people with the 100 most popular majors focusing on the job descriptions and responsibilities section. Since some majors within the top 100 are wildly more popular than others (Psychology is 100x more popular than “Sales and Marketing Operations/Distribution”), I only considered a random sample of 2,000 resumes for each major.

I removed all punctuation from the dataset and each word is counted once. As a quick example, can’t, cannot, and can not would be four unique words.

This process is certain to count typos as unique words, the data still provides a relative sense of which majors essentially become Shakespeare over the course of their career. Let’s dive into some of the interesting cases in the data.