A Look At How Resume Formatting May Affect Hiring Discrimination 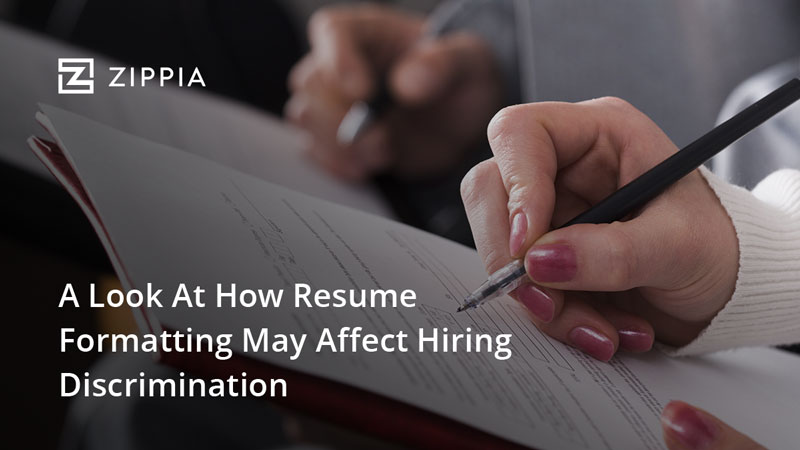 The internet made finding jobs a cinch and filling out applications simple, but getting a response — even a thanks-but-no-thanks — is another thing entirely. It’s a seller’s market: on average, corporate job openings get 250 resumes with the first one arriving within 200 seconds after a position is posted.

With that in mind, we decided to dig into a database of about 7.5 million resumes to figure out if the resume format makes a difference. It turns out that resume format does matter, and discrimination may not just be based on the candidate’s gendered first name: hiring managers favor “masculine” resume styles over resumes with proper format and spelling.

What do we mean by “masculine”? Well, it comes down to how men and women differ in the formatting of their resumes. Variables of interest to us included:

So here’s a closer look at the data and how we came to this conclusion, and why Alex might get the job, but Alexandria doesn’t.

It’s unfortunate, but the recruiter is usually looking for reasons to reject you — so in this study, we first examined what’s average.

Time spent on the job 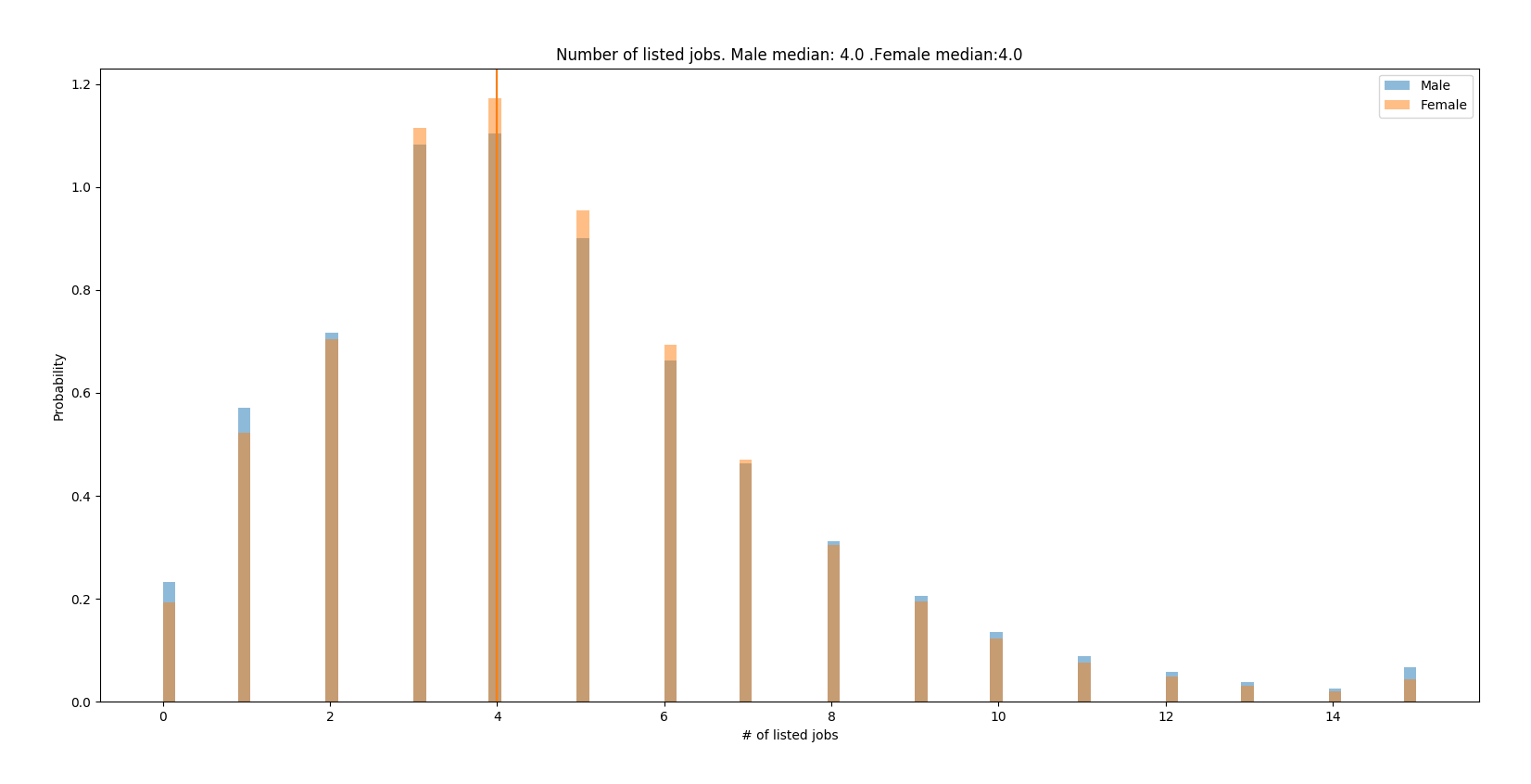 But being too far out of the ordinary is a no-no, according to most career experts. The more likely interpretation of this is that men simply are less careful, because our analysis also shows that men also make about twice as many spelling and grammatical errors as women.

A question of format

So men deviate from the norms and make mistakes more often. But also, observation of the parts of speech in the resumes also shows that our results are in line with this article detailing tech resumes — women’s resumes tend to be more colorful and verbose, less objective and concise.

And this, at least, is a good thing

This is important because research shows that hiring managers don’t take the five minutes they claim they do to consider you — six seconds, remember?

Google HR head Laszlo Bock recently suggested that you should be brief and to the point with your descriptions:

Basically, for all your accomplishments use the format “accomplished X by doing Y as measured by Z.”

This helps your recruiter make the most of their six seconds, finding important keywords and relevant information. An ERE study indicates that a skimmable resume improves its rating by 60 percent.

A recent Fortune article relates how Erin McKelvey couldn’t get a job in the tech industry until changing the first name on her resume to the more masculine-sounding Mack.

Similarly, a linguistics PhD found that when identical resumes for fictional candidates John and Jennifer are compared side by side, male and female STEM hiring managers are equally guilty of favoring John and paying him more.

Experiments and anecdotes like these serve to prove that there is in fact a tendency to discriminate against feminine (and ethnic) names — but there’s also an inherent control in these two scenarios: the names changed, but the resumes’ formatting stayed the same.

One method for correcting gender-based discrimination is blind hiring — removing application information that would indicate gender — in an effort to increase diversity.

But in a surprising turn, Australia’s government found blind hiring counterproductive, “that de-identifying candidates reduced the likelihood of women being selected for the shortlist.”

That is, in this case, men’s resumes were preferred over women’s even when names were removed.

Female applicants’ methods are discriminated against

It’s a fact is that name discrimination — judging candidates differently based on name-based gender assumption — exists in the hiring process. Our study doesn’t contest that. Rather, this study instead suggests that traditionally feminine communicative methods and application approaches are disadvantages in the hiring process.

Consider this graph from the Harvard Business Review: 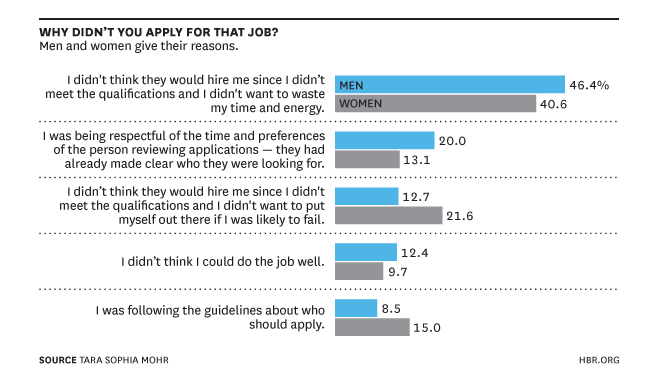 It’s telling that three factors accounting for 78% of these barriers to applying for jobs have to do with believing that the job qualifications are real requirements.

This suggests that women don’t “just need more confidence,” or in the words of research:

Some tips on what matters on resumes, for both men and women

There are certain rules that everyone needs to follow — and they’re not much of a surprise. Here are some percentages that show what things you 100 percent shouldn’t do:

How to define an “unprofessional” email address is a challenge, but the odds are that if you came up with it before you graduated high school then you shouldn’t use it after you graduate college.

The most important thing, regardless of gender, is to pay attention to spell check and have a few people read it for a sanity check, catching phrases and lines of thought that aren’t clear to anyone but you — and as our study suggests, maybe put them in bullets too.