By Sky Ariella and Experts Jul. 6, 2022
Articles In Guide
In This Article
Skip to section

If you went into an interview being told that it would only last about half an hour, and you’ve been speaking to the hiring manager for over an hour, that’s a good sign the interview is going well.

Conversely, if the interview stops right after it started, probably not the best sign.

Zippia helps over 5 million job candidates find jobs and get interviews every month. We’ve talked to numerous hiring managers and candidates throughout the years to see if there are patterns in interviews that you can use to identify when they are going well. And a handful of patterns that may indicate you should keep on applying elsewhere.

Here are 16 of the most common signs we see that the interview went well — and eight signs things aren’t going as smoothly as you’d like. 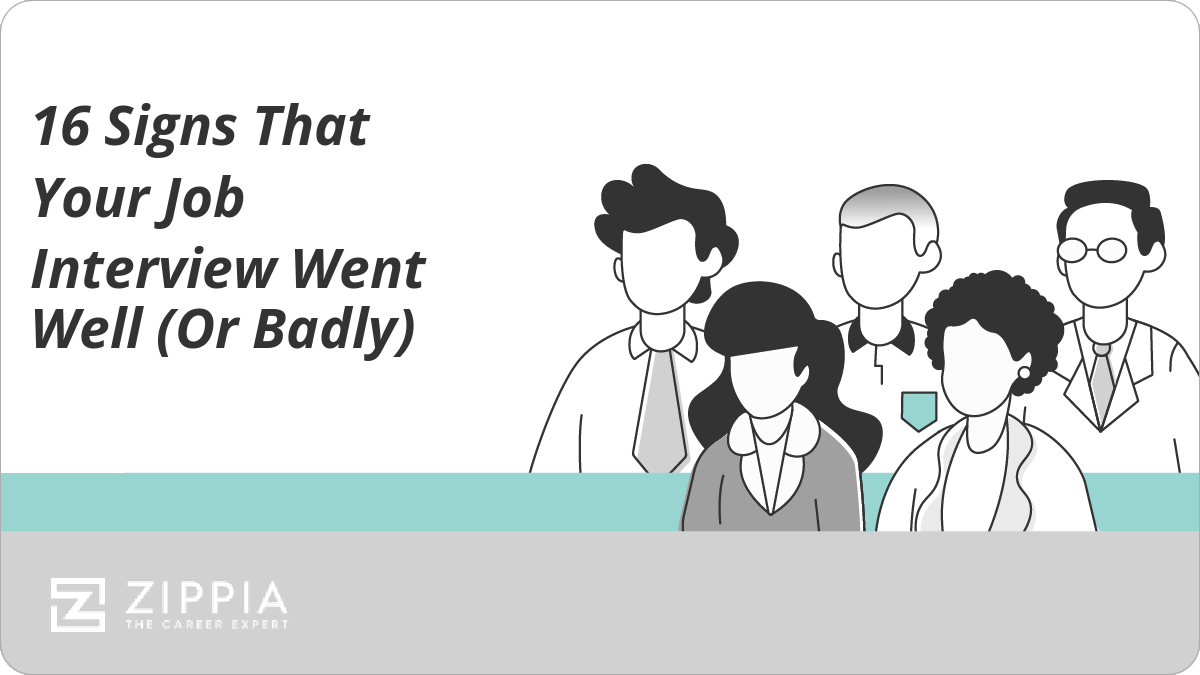 This is both a matter of selling you on the position and making it clear that they’re looking to have you work for them long term. Employers like candidates that commit to the company and the team. It usually also shows that they’re impressed with your and your credentials, as they can see you in a higher level role.

Here’s the expert opinion on how to know whether your job interview went well:

Tips For Understanding If Your Job Interview Went Well

I believe in a simple solution: ask. At the end of the interview, ask about the company’s hiring process, next steps, and what to expect. Typically, lack of interest becomes pretty obvious at this point, but even if it doesn’t, you’ll have a timeline for follow-up. This helps reduce uncertainty and associated anxiety. It also gives you an excellent reason to check-in and follow-up appropriately.

These five companies are hiring now:

Not every job interview is going to be a home run or land you the position. There are external factors that can contribute to not giving your best performance, and that’s okay. There will always be more interviews and great jobs. If you’re at a loss for the status of your interview after reading the positive signs above, consider the following indications that it didn’t go well.

This isn’t inherently a deal breaker, as if you can address their misgivings you could still be offered the job. However, if the interviewer is going through your resume and picking out issues, then it’s likely they don’t see you as a good fit for the position. This is especially true if they mention potential problems with you fitting into the company culture.

This could be an issue in a couple of different ways. If the hiring manager is very negative about the position, it could mean that they don’t think it would suit your skill set or personality. As being able to fit into the team and environment of a position are very important aspects of an interview, that could easily be a deal breaker.

It could also mean that it’s an unpleasant working environment and the interviewer is warning you about taking the job. If this is the case, then it’s definitely a good idea to look elsewhere.

If you get a chance, it’s good to look in other parts of the office and at other employees to get an idea of what the place feels like. Of course, if the interview’s not going well, this is less likely to happen — but interviews do typically take place in the office.

And if you’re looking for a job, here are the five most in demand jobs right now:

Denise Bitler has 30+ years of HR experience working in various industries and with all level of employees from hourly through C-suite, as well as company Board Members.She is the founder of Resume-Interview Success, LLC and is an expert in best practices related to resume, cover letter, and Executive bio writing, LinkedIn Profile optimization, job search strategies, and interview coaching.