States with Most Non-Citizen College Professors

by McLeod Brown
Study - 3 years ago 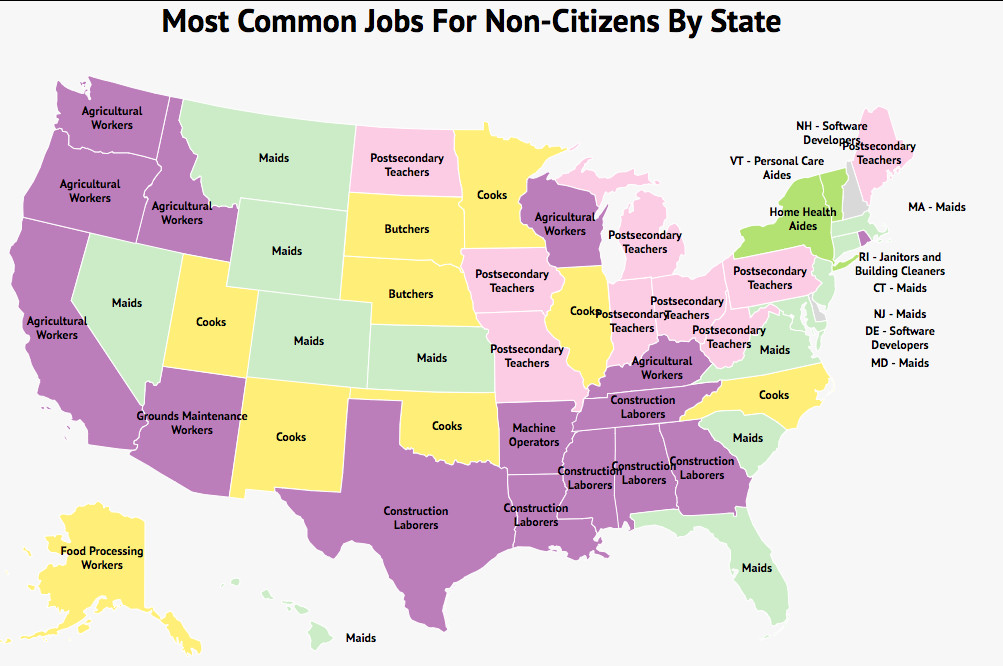 It will have been seventy years since the U.S. Census Bureau Decennial Census last asked people living in the country whether they are citizens or not — that is, if the question appears on the 2020 Census Survey.

However, that question is already part of the annual American Community Survey, so there’s plenty of data about non-citizens to explore. Given that we’re a jobs and careers website, we took a closer look at the jobs that non-citizens do.

Typically, when we think of the jobs non-citizens do, we lean towards the service and agriculture fields, and in most states, that is true.

However, when we looked at the most common jobs for non-citizens, we noticed an odd trend throughout the midwest – postsecondary school teachers.

The states below listed postsecondary school teachers as their most popular job for non-citizens at a rate per 100k people basis.

Jobs-per-100k is the most important metric for this study. For example, for every 100,000 people in North Dakota, there are 103 non-citizens working as postsecondary school teachers.

Looking at the American Community Survey 2012-2016 from the PUMS dataset, we drilled down what were the most common job titles for non-citizens by state.

We then dug deeper into those states with postsecondary teachers as their most popular job for foreign-born citizens to learn some more stats about them.

Additionally, 28.6% of the over 9,000 non-citizens who were over the age of 16 and employed worked in the educational service industry, tops for the group.

In Michigan in 2014, 20% of the state’s foreign-born population ages 25 and up held a graduate degree. This compared to just 10% of the native population holding the same level of education.

In 2016, there were 8,181 participants in the J-1 Visa program in Michigan. After subtracting those students in the program, professors and research scholars account for 23% of program participants.

In the Hoosier State, immigrants are 74.5% more likely to hold a graduate degree than natives.

Additionally, in 2014, 15% of foreign-born working-age (25 and over) citizens held a graduate degree, compared to 9% for the native-born population.