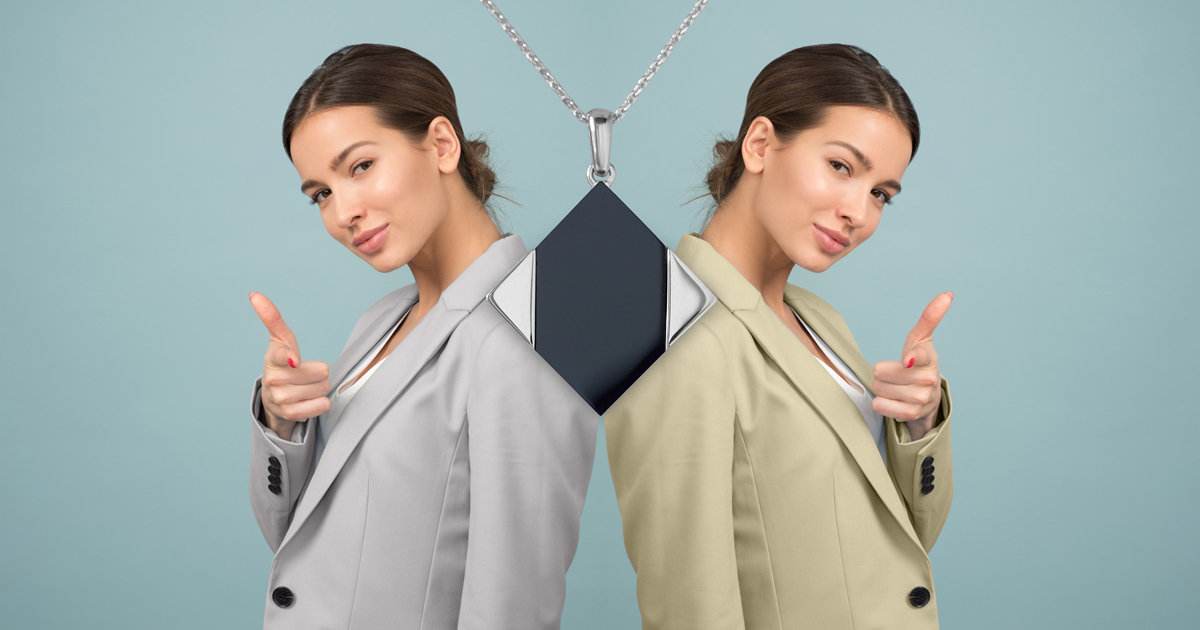 5 Ways Jewellery Can Help You Negotiate in the Workplace

Editor’s Note: This is a guest post by Lara Gems – Founder of Gems In Style Jewellery. Her opinions are her own.

Jewellery is so ubiquitous that at times it becomes nearly invisible and loses its immense potential. In this post we will look at the five core principles behind the effective use of jewellery in the context of the office and work environment. When you engage in discussions and negotiations or you are in the process of establishing yourself within the organisational structure, wearing the right kind of jewellery gives an incredible boost to your strategic positioning.

The true power of jewellery lies in its ability to pass subtle subliminal cues to peers, colleagues, and even bosses enabling its wearer to present herself in the right light that matches her current intent and agenda.

Skilful use of jewellery in the work environment is the “sixth sense” that only a few consciously practise and cultivate — yet there is little doubt that every woman willing to expand her tactical repertoire can become the master of this ancient art.

Over the course of the last hundred years the role of fine quality jewellery has gradually shifted from the high class necessity status that explicitly separates the elite from the masses, to a truly democratic symbol affordable to nearly every working woman.

This process of “democratisation” of jewellery hasn’t diminished its potential. Finely designed and crafted accessories project succinct yet noticeable statement about a woman’s personality and status, her intent and aspirations for the day. A carefully selected and purposefully placed jewellery piece has the power to reinforce and solidify the wearer’s sense of worth and self-esteem thus immensely helping to maintain and even further advance her status, both within the organisation or as an independent consultant.

The following five principles dive deeper into the exploration and understanding of how jewellery works and how to harness its powerful subliminal language for one’s own benefit in the workplace.

1. Jewellery is for close encounters

In the context of the work environment there is one common strategic mistake that many women make. It is about misjudging the size of jewellery.

We are often influenced by what we see on the big screen where the most noticeable wearers of jewellery are either news presenters, commentators, celebrities, or politicians.

The nature of their activities necessitates them to wear either very subtle, nearly invisible, pieces or extremely large and noticeable artefacts (think of outgoing British Prime Minister Theresa May).

Big chunky items of jewellery work when the woman needs to address a large audience. They make her noticeable from a distance.

The weakness of large pieces is that they are simply too big for arm’s length encounters, arguably the most common distance of human interaction in the workplace. At short distances large jewellery blurs out of focus disappearing from the viewer’s field of perception. At best it becomes invisible and loses its potential, at worst it becomes intrusive and unsettling.

The size of the chosen piece of jewellery should be proportional to its wearer’s facial features. This ensures her visage is being respected, harmonised and supported by the precious accessory. Strategically chosen jewellery accentuates its owner’s eyes, it gently highlights natural qualities — thus reinforcing both her essence and her mission statement for the day.

Do I want to be seen as a peer or as a superior? What do I want to state by wearing this piece of jewellery today? What is the best visual way to highlight my professional aptitude and convey the right message?

Answering these questions requires taking a brief but a deeper look at how the symbols that you are going to wear shape your image in your colleagues’ eyes.

In the past, wearing a sophisticated and often exceedingly expensive piece of jewellery was the hallmark of upper class women, it underlined their exclusive status and drew a line that only some could afford to cross.

Achieving things professionally requires cooperation from peers and superiors, their willingness often comes as an act of respect and good will. And in many cases, wearing an overly expensive piece of jewellery may not be the best strategy — at the subliminal level the message is “see how well off I am.” While there is nothing wrong with owning something really expensive, the peers would much prefer a feeling of “I am pretty much like you but I also have a certain sophistication that you may be interested in.”

Democratic jewellery doesn’t mean it’s the cheapest. The true power comes from its balanced sophistication subtly radiating from the quality of its design. It doesn’t scream but is passes the sense of the owner’s thoroughness and the sense of professional relevance.

3. Diamonds or plastic? In search of the golden middle ground!

One can never be wrong getting a diamond ring or necklace, right?

It depends. On one hand, diamonds aren’t really that rare or truly forever. Their inflated market value is well known to be an outcome of an exercise in marketing – aka myth building.

The truly weakest side of diamonds is their ubiquity, their “no-brainer” status. Remember how in the business world they used to say “Nobody gets fired for buying an IBM.” That’s the true weakness of diamond jewellery — it’s mostly valued for its price tag.

The opposite to the diamond is the ever growing variety of “throw-away” fashion and costume jewellery mass produced from stainless steel, plastic or even rubber. This category is a paradoxically mirroring “no-brainer” twin of the world of diamonds.

There is a middle ground that exists between the world of expensive sparkly jewellery and cheap glittering imitations. The world of carefully designed and crafted jewellery that is known for its use of natural materials supplied by the Earth — pure precious metals and semi-precious gemstones.

This natural designer jewellery provides a rich visual language that has powers to complement and support women in a variety of professional situations ranging from important meetings to daily routine and admin duties.

Semi-precious gemstones are known for their expressive language and subliminal nature; their energetic qualities have been known for many centuries. Most of us can relate to these little wonders of Earth because they represent life that we all know and love.

Later in this post I will dive deeper into how every working woman can tap into the “natural factor” in the context of professional activities.

4. Understanding the geometry of jewellery

Perhaps the true power of jewellery lies in its geometry. Modern technology can convincingly imitate diamonds and jewels. But the geometric appeal will always remain unique. Geometry is a powerful and universal language that forms the visual matrix of everyday life.

The shape of a jewellery piece is the active force that speaks on behalf of its owner. Articulating desired daily intent by using the right kind of shapes provides a powerful reminder and a supporting principle to refer to throughout the day.

Psychologically speaking, every basic geometrical shape carries seeds of profound symbolism that are easily understood and accessible via daily situational awareness. Those “stem” shapes are: the circle, the triangle and the square.

The circle symbolises unity, flow and harmony. Its roundness is reminiscent of the Moon and its feminine features. The human body is made of many circles, the roundness is the principle of welcoming cohesion and equalisation.

Use circle-based jewellery in situations that require a human touch. Circles pass the sense of friendliness and all-inclusiveness. They are great to help facilitate teamwork, participation and value sharing.

The triangle is known to be the symbol of fire, especially in the domain of visual arts. It is the most unstable shape that has the powers to dynamise and cut through. Triangles symbolically push for reviews and changes, they never wait or allow for a pause.

In its pure form, triangular jewellery has limited practical use in the context of professional activities — that’s unless you know exactly what you’re doing. Pure triangular shapes don’t allow for stability and grounding that are much required when you need to accomplish something specific.

The square shape that is essentially a combination of two or more triangles and brings desired stability without losing its cutting force of discernment. Most solid objects are more or less based on square or rectangular principles: from chairs to the Egyptian pyramids and downtown skyscrapers, the square principle acts as the foundation for human achievement.

However, there is one problem with the square, it’s too boring and static. Thus well designed jewellery usually combines the principles of squares with those of a triangle, aiming at a perfect balance and cooperation between stability and cutting energy.

Wearing square-triangular jewellery emits expressive visual cues into the work environment. It passes an impression of a woman who has both reputation of solid practical achievements while not being hesitant to speak her truth and show her potential skill set. She’s a doer and an achiever, a confident force to be recognised and respected.

More complex abstract and synthetic geometrical shapes follow the designer’s vision and imagination. They are usually more nuanced and allow for a broader range of interpretation.

Although not competing with the raw energy of the basic shapes, these sculpted forms offer a certain power of abstraction that invites the “wow, what is that?” curiosity. Wear abstractly sculpted jewellery designs to pass the sense of your sophistication and complexity. Such pieces work well for most kinds of introductions including performance reviews, the times when you need to create a sense of professional enigma and depth while remaining open and relaxed, supported by your own essence.

5. Making yourself interesting and natural

“That stone of yours is out of this world!” … and so are you. That is the secret of uniqueness.

Every frame, no matter how beautiful, needs content. That is why traditionally all jewellery pieces used their sophisticated frames to hold and embellish precious and rare pieces of matter — natural gemstones.

A natural gemstone is the result of geological processes that took millennia to complete its stunningly unique substance and pattern. Gemstones capture the essence of life as it was slowly flowing through the veins of Earth.

Gemstones are not only natural, they are also interesting. Each gem tells its own story by means of visual and tactile qualities. While for the most part diamonds tend to look alike, it’s not so with gemstones!

The Earth produces a huge variety of gems in many colours and patterns. Semi-precious gemstones including:

are just the beginning of a long list of wonders that are embraced by jewellery designers.

Wearing a gemstone fills you up with precious content, it provides a story to rest on. Even if only slightly familiar with the energetic symbolism of each of gems you own, this knowledge still subliminally shapes your day and sets right intentions and expectations.

An interesting gemstone can be a great ice-breaker facilitating better rapport and softening opposing interests. Finally there is something to talk about apart from work!

10 Fun-filled Activities to Help Boost Team Morale
How to Improve Your Brainstorming Sessions [Infographic]
Beware of the Software Super Salesperson!
Understanding Your Team: Who’s Who in Your Hundred Acre Wood
Are your employees wasting time in the workplace? [Infographic]
8 Effective Employee Retention Strategies