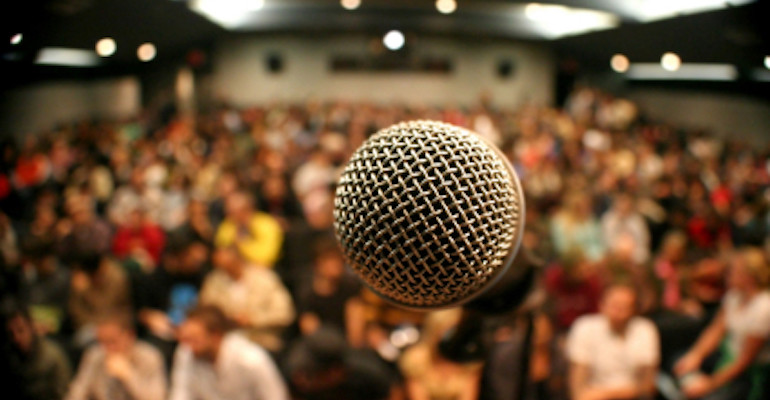 How to Turn Your Speaking Anxiety Into Runaway Success

Editors Note:
This is a guest post written by Phil Preston, motivational speaker, facilitator and innovation practitioner who is also a Co-founder and Director of Presentability. His opinions are his own.

As Dan approaches the stage, clutching his autocue (iPad) like a drowning man would a life vest, he says he has to sit down because he has shaky legs. Plus he hasn’t given a speech since high school so he tells us he’ll probably be ‘crap’. The audience has a moment of reserved but heightened anxiety and prepares for the worst. Ten minutes later, we find ourselves roaring with laughter.

What went wrong with this scene – or should I say, ‘What went right?’

Dan is what I call a Dark Horse Speaker.

This is the name I give to speakers who knock out audiences, although based on a technical analysis they should have died an agonising death on stage. When I think about big impact speeches I’ve heard in my lifetime, I find that I’m drawn to ones that, on conventional measures, should have failed.

Another example: the best man’s speech at my friend, Wayne’s, wedding. There was no fanfare, no polished gestures or amusing rhetorical advances. No PowerPoint slides, remotely funny jokes – not even eye contact. It was read from a scrappy piece of paper. What you saw was what you got.

The reason I remember it so distinctly though is because he relayed three instances from his childhood days that were significant to him, and at the end of each one he used a refrain to emphasise that Wayne had been there with him. For example, he ended one story with “When I got in my first fight, Wayne was there”.

By the end of his short speech, we were touched and there was barely a dry eye in the house.

I thought, that was a great mechanism, using examples and then finishing with a similarly structured refrain after each one. But there must be more to it than that! The other speaker, Dan, didn’t use this structure – he used a list of ten things he’d abjectly failed at and was funny and memorable for very different reasons, including his sharp, dry humour.

What is the common denominator here? How do we make sense of this?

The answer came in the form of a TED speech by Brené Brown, an expert in the area of … wait for it … vulnerability and shame.

In it, she talks about the personal success she experienced after her first TED speech, taking calls from businesses, schools and conference organisers all over the US who wanted her to come and speak to them. Except many of them asked if she could speak on something other than vulnerability or shame!

Brené enquired as to what they would like her to speak about, and the three top answers she received were creativity, innovation and change. To this she replied, “Vulnerability is the birthplace of creativity, innovation and change”. It all started making sense. It clicked inside my head that I had unlocked the secret, or gained possession of the saddle, bridle and reigns, of the Dark Horse Speaker.

The common thread between Dan and Wayne’s best man – and to the handful of others I would add to my ‘great speech’ list – was the presence of vulnerability. They didn’t own the stage; they didn’t have polished skills; they were vulnerable. It put us, the audience, on edge. And as their speeches unfolded from their tentative beginnings, their imperfect but authentic character shone through. We felt relieved and exhilarated, we rooted for them as we would an underdog and we shared in a special celebration of communal joy when they overcame the odds and succeeded.

Not everyone is, can or needs to be a Dark Horse Speaker. I suspect that we would find they are intelligent, introverted and willing to take just enough risk to push themselves close to the edge.

What we can take away from this as budding or accomplished speakers ourselves is:

It is vital that, when it comes to showing our own vulnerability, we are careful not to fall into the trap of ‘over-sharing’, where we tell our own personal stories to gain sympathy – they must always be relevant to our speech purpose, our message and our audience.

Next time we see a speaker who is seemingly abysmal turn in the performance of the night, we may be witnessing the phenomena of the Dark Horse Speaker, who manages to turn speaking anxiety into runaway success.

Phil Preston, along with Michael Neaylon, is a cofounder of Presentability. They are entrepreneurs who facilitate influential and persuasive presentation skills programs, webinars and coaching to equip you with the skills and confidence you need to stand out in today’s business world.

8 Ways to Retain Employees After a Merger or Acquisition
Encourage Your Workforce to Self-Actualize ... Through Podcasts! [Infographic]
How to Deal with Disasters
Movember 2014 = Scary Facial Hair & Awesome Charity
The Future of Recruitment: 7 Tips on How to Best Recruit Gen Z
How to Build an Employee Referral Plan That Works