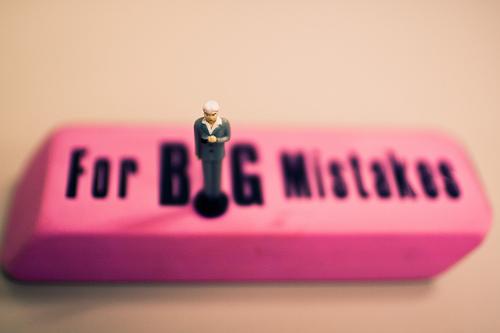 The 7 Biggest Mistakes I Made as a Hiring Manager

Earlier this week, we posted a list of Paul’s top 10 stuff-ups (in American – screw-ups :)) he made as a recruiter. Since turnabout is fair play, I decided to post my own list of massive errors – from the hiring manager end. While there may be fewer, they’re no less cringe-inducing!

1. Perhaps a better organization system would be in order…?

I was working on my first hire, and we were still in the years right after the dot-com bust, when times were tough in IT. I was in the middle of a technology buildout for a startup law firm and posted a help desk role.

The résumés came in by the bucketload. We easily got 300 résumés from our low-level help desk role posting. HR printed them out for me (yes, this was over a decade ago), and I trucked them all home to review over the weekend.

This was my first time screening résumés as a hiring manager, so I wanted to make sure that I properly categorized them. I got up early on Saturday and started reading through them, annotating them, and putting them into piles. Eventually, I had somewhere between 14 and 18 piles all over my living room floor.

All seemed well, until I needed to get to another part of the apartment. I stood up, tripped, and landed in the piles, hopelessly mingling all of them.

When I went back through them, I only used 3 piles – yes, no, and maybe. Oh, and I didn’t put the piles on the floor!

2. HR is NOT always right

I’ve been fortunate to work with some fantastic folks in HR, but I did learn the hard way that they’re not always right about hiring – especially in IT. This was for the same help desk role for which I created the résumé blizzard above.

HR came by after the interview and said that the last candidate was The One. I didn’t have a good feeling, but, well, this was my very first hire and I figured that trusting HR was a good thing to do – right?

From telling someone that MS Word didn’t have the capability to do footnotes (which it certainly did even back in 2002!) to hiding invoices from me, to keeping the spit from chewing tobacco in a soda bottle in his office (ew!), the guy was an unmitigated disaster.

So I got to fire my first hire.

The same day I fired my first hire, I had the most awkward interview moment I’ve had in my career (including when I gesticulated too exuberantly and spilled a glass of water all over a candidate). Mere hours after my first fire, HR managed to bring in someone to interview for the job – someone she thought was a rockstar but didn’t talk to until it was too late in the process before.

We were sitting in my office, and the candidate said, “Hey, what happened to the guy you hired the first time?”

Not expecting the question, I responded, “Oh, I fired him today. Want to see the server room?”

Shockingly, he took the job, worked for me for the next five years, and we’re still friends today!

I’ve worked in a few companies where candidates come in for an “interview loop”, where they meet a bunch of people in order. And while I usually carefully reviewed the schedule, once, well, I wasn’t as diligent.

I’d just finished interviewing a truly fantastic candidate, and I wanted to make a good impression on him. So towards the end of the interview, I started the sell job. You know, the part where you start talking about how great the company is and how fantastic you are as a boss?

Everything was going so well.

And then someone came to the conference room. Clearly, it was their reserved time, so we had to vacate. And just as clearly, I had no idea what came next. Was there another interviewer? Was I supposed to walk this guy to the door? To another conference roem?

I fumbled around a bit, hoping that someone would come by with the next interview slot and rescue me, but no such luck.

I seated the candidate in the waiting area, ran back to my desk, sllllllowly woke up my computer and scrambled for the interview schedule, and FINALLY figured out what to do. Which was to say goodbye.

5. What do you mean, I should have told you the salary range?

In my time as a hiring manager, I worked with some really fantastic recruiters. Seriously awesome. Sadly, I wasn’t always as awesome a client.

Once, I emailed a job description to one of my favorite recruiters labeled HIGH IMPORTANCE – RUSH. I demanded anyone who was in the database who fit be sent my way within 24 hours. Apparently, I was pretty desperate to fill this role.

I then promptly stepped into a 4-hour meeting and turned off my phone and Blackberry.

I returned to my desk (after business hours, of course) to a slew of URGENT emails and voicemails. It turned out that I had forgotten to tell the recruiter the salary range, thereby making it completely impossible to send me any candidates or even come close to my ridiculous timeframe.

If you’ve read any of our resources, you may have seen us write, “…or worse, bring the wrong résumé into the interview room?”

Well, I may as well come clean – I’ve done that more than once. Sometimes, I’ve covered it up fairly well, by flipping the paper face-down and saying something like, “I find that résumés don’t tell the whole story – why don’t you run me through your background?”

One time, though, I failed. Repeatedly. I’d brought in the wrong résumé, and proceeded to call the candidate by the wrong name. For the entire interview. And, of course, I drilled down on some things I found interesting ‘their’ résumé, except the résumé wasn’t theirs.

I have no idea why the candidate waited until the end of the interview to correct me, but let’s just say that I was extremely embarrassed. That said, at least the answers I thought were nonsensical made more sense in context, right?

Once, I interviewed a candidate and I had NO idea why she was sitting in front of me. She had no relevant skills, no relevant experience, and no interest in the job, as far as I could tell. I didn’t know why I’d gotten her résumé from the recruiter who was doing our screening, and I was a hair’s breadth from firing our recruiter over it.

I was talking about this candidate to another of her interviewers, who was also disgusted by the situation. As we were complaining, our CEO overheard us and said, “Then we won’t hire her! Always raise the bar! Always always.”

I went back to my desk and confronted the recruiter about the candidate. “Why in the world did you waste our time with her?”

His response? “She came directly from the CEO, who demanded that we give her a full interview.”

Passive Sourcing: You're Doing It Wrong
Your Thanksgiving Recipe for Great Recruitment
Going grey can be good for business
10 Essential Qualities to Spot in Effective Remote Workers
How to Alienate the Best Talent
5 Efficient Strategies to Hire More Women In Tech