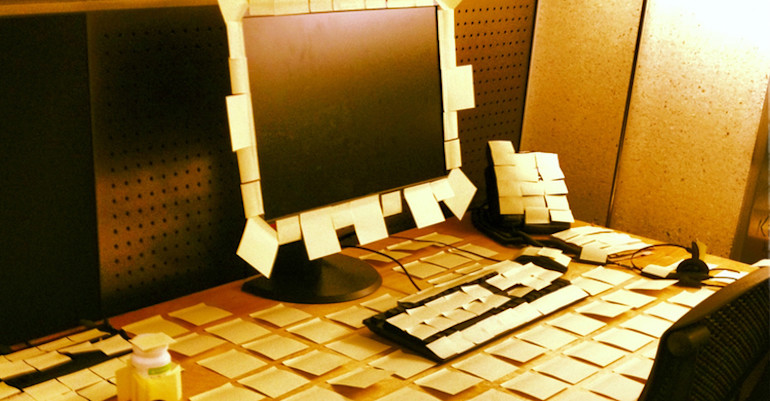 Tricks & Treats in the Office

I have a confession to make: I LOVE practical jokes. At least, I love them in the office (my brothers might read this and I don’t want to give them any ideas!). No matter how formal your work environment, practical jokes have a surprising amount to add to office culture.

One of the first practical jokes I ever played was during my first month at a law firm: The head of IT came out of his office to see me standing on top of a desk hanging someone’s beloved giant paper crane from the ceiling using a telephone cord noose. He just said, “I don’t want to know,” and walked right back into his office.

As tempting as it might be to regale you all with stories of office hijinx, though, I actually believe that office tricks have real, valuable purpose in any kind of work culture. I’ve worked in startups, uptight law firms, and big companies, and all of those environments have benefitted from practical jokes. Here’s how:

Work can be stressful. Laughter helps. When people are working long hours in a stressful environment, taking 15 minutes to do something mischievous suddenly makes work less stressful.

The picture at the top of this post was the result of 15 minutes on a Friday night during a stressful time at a big company. The owner of this desk was coming back from vacation on Monday, and we figured we’d make him feel special when he returned. The best part is that he actually re-used all of the post-it notes over the next six months or so.

Hanging the paper crane solidified my place on a new team; my co-workers knew they could count on me to participate in anything fun. I’ve also seen members of multiple teams come together to pull off some amazing stunts.

The guy you see in the picture here is a big Real Madrid fan. Several different teams came together to deck out his cube completely in FC Barcelona paraphernalia. The look on his face when he came back from vacation was priceless (as you can see), and we all got to know each other quite a bit better!

Tricks can be extraordinarily effective when you’re trying to reinforce a rule or regulation. I once worked at a company where security was paramount. Leaks could cost a great deal of money and embarrassment, so we had very strict security rules. One of the top rules was never to leave your computer unlocked when you walked away.

Instead of using punishment to reinforce this rule, there was a company-wide practical joke that the unfortunate soul who left his or her computer unlocked could expect: Someone would send email out to the team (and sometimes to the whole division) proclaiming the victim’s love of a certain farm animal.

Some teams would take this a bit further. There was a certain woman on one of my teams who LOVED practical jokes. When the farm animal emails failed to change behavior, she would take it one step further and start introducing unfortunate autocorrects into the victims’ email programs. When an long, elaborate email would come out where the victim had failed to catch the autocorrect, everyone would know who had left his or her computer unlocked again. We eventually had to tell one person to ask her how to fix his autocorrect!

Here at RecruitLoop, we change the person’s desktop background to something wildly inappropriate rather than sending email about farm animals. Of course, our CEO was the first victim.

Believe it or not, if you’re the victim of a non-cruel practical joke, it means the team is including you. If they don’t like you, you won’t see many jokes. This is especially poignant if you’re the boss.

A while back, I was running an IT department at a law firm. I was also the Regional Vice President for the International Legal Technology Association and wrote a quarterly column in their publication. In the issue right before their primary conference, I wrote, “If you’re reading this at conference, I’ll see you at our regional meeting… If you’re not, you’re probably my staff and are toilet papering my office for revenge.”

Of course, I had forgotten that my staff subscribed to the publication. I returned from the annual conference, opened my office door, and guess what had happened?

To add insult to injury, they pointed out that I brought it on myself. Here’s what the back wall looked like:

If you can’t read it, it says (spelled out in toilet paper), “U wrote it” and has a copy of the article taped to the wall.

It’s okay that I was happy that the facilities manager made them go out to the convenience store nearby and buy their own toilet paper rather than using the firm’s, right?

The reason I loved this joke was that, well, I was the boss. If they felt comfortable enough to pull this prank on me, it flattened the organization a bit and I knew that the office would be more fun for all of us.

Incidentally, we’re all still friends today, even though we haven’t worked together since 2007. We’ve been to each others’ weddings and know each others’ babies. This kind of inclusion was only the beginning.

These examples only scratch the surface of the jokes I’ve seen. I’ve been in offices that use the Chrome Website Editor for nefarious purposes and others with a penchant for wrapping desks in newspaper or bubble wrap.

I hope this post has made you more likely to participate in or condone office pranks – Tricks can be real Treats! Share some of your favorites with us below (I always need new ideas!).