Bitcoin Is Booming: Top Cities For Blockchain Jobs In America

Bitcoin is booming. While individual Bitcoins are worth slightly less than two years ago when we delved into the cryptocurrency industry, the number of jobs and current level of public interest is growing.

Cryptocurrencies run on the blockchain, a decentralized technology that creates a public ledger using crowdsourced communities. Bitcoin owes part of its rising value to interest in cryptocurrency by tech giants. With Facebook’s launch of Libra and Google considering entering the banking world, people are being reminded of the OG cryptocurrency.

All this news coverage and rising value also has us revisiting a familiar subject: How do you make money in cryptocurrency?

While there is certainly money to be made speculating on cryptocurrency; There is a growing industry and a number of jobs working within companies specializing in cypto.


We have a full list at the bottom, but first, let’s look at the best of the best. Here are the top 10 cities for jobs in Cryptocurrency:

Read on to see the full list and how we reached our results.

HOW WE DETERMINED THE BEST CITIES TO FIND CRYPTOCURRENCY JOBS

We searched more than three million job listings for jobs related to cryptocurrency. We limited our search to municipalities with more than 10,000 people (sorry, if we missed burgeoning rural cryptocurrency communities.)

Job listings mentioning any of the following or related words were tallied as ‘cryptocurrency jobs’:

When we ran the numbers two years ago, the list of jobs was dominated by areas known for being startup hubs (Silicon Valley, NYC, and Boston).

Don’t get me wrong, the start-up scene still looms large in Cryptocurrency. After all, Menlo Park came in at #1, with 20 Cryptocurrency jobs per 10,000 people (a figure nearly double that of #2, Bethesda, Maryland). However, there has been significant geographic movement on the top 10 list.

This year’s data saw a departure from a east-west coast heavy list, with midwestern Onalaska, WI and Westchester, IL both making the list. In addition, DC seems to be emerging as a place to be in cryptocurrency with four cities in the top 10 (Bethesda, MD, Fort Meade, MD, Herndon, VA, and Vienna, VA) being in the vicinity. 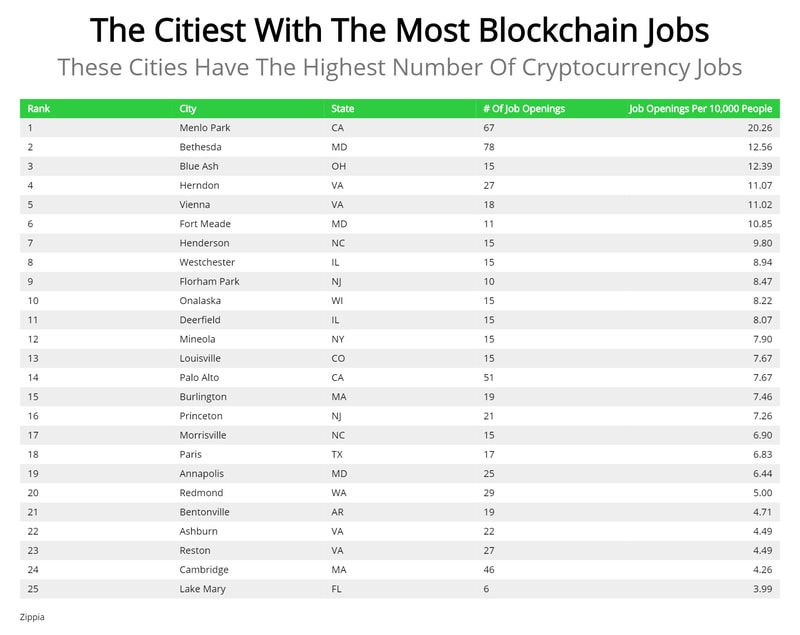 ACTUALLY GETTING YOUR SALARY IN BITCOINS

Most cryptocurrency companies pay their employees in standard government issues currency. While that might be disappointing to a Bitcoin fanatic hoping to capitalize on rising values, it can also lend a desired stability to your paycheck. It is not impossible for Bitcoin to see double-digit fluctuations overnight. While it might be cool to get a 100% raise, getting a surprise morning paycut certainly is not as fun.

In January 2015 for example, Bitcoin started the year just over $300, but then crashed to a low of around $170 on 14th January, losing 37% of its value in two days. While it has recovered in value since then, it would not be a fun salary cut.

If you really are hooked on getting paid in Bitcoin, you can always find a third party operator to convert your paycheck into Bitcoin automatically. Of course, that adds a certain complexity to buying food and paying rent, but to each their own.

You can use the calculator below to see what your salary would be in Bitcoin:

INVEST IN THE SKILLS YOU NEED FOR BITCOIN

The bulk of cryptocurrency jobs are for blockchain engineers, developers, and other tech positions.

While there are certainly other jobs in cryptocurrency (investment jobs, content positions, etc), the skills that you need to succeed in cryptocurrency are typically ones that would serve you well at any tech centered start up: Javascript, HTML5, CSS3, and the ability to build full stack applications.