Most Common Resume Items of Business Founders and CEOs

by Chris Kolmar
Skills - 3 years ago 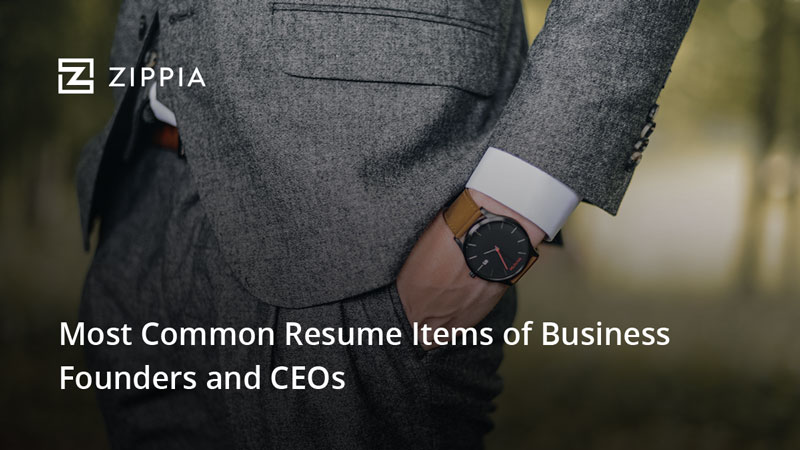 We’ve all seen successful business Founders and CEOs on television and media, often in press conferences or as official contributors to one program or another. But have you ever wondered what these company heads did before they got to where they are now?

Well, we did. The following article includes bar charts comparing the most common previous work experience, education, and college major for resumes of Founders and CEOs, and each section also contains a quick Top Five list for each profession.

Before we move on to all that, though, here’s a quick word about how we compiled this data.

How Did We Figure This Out?

Using our database of over 7 million resumes, we looked specifically at all the ones related to Founder or CEO positions. For each of these jobs, we then put together a series of data based on the following questions:

With that out of the way, let’s get into what we found.

This section tracks the most commonly listed previous work experiences of both Founders and CEOs. Those in Founder and CEO career paths tend to have also held jobs in previous Founder or CEO positions (respectively), but beyond that, leadership positions, consultant positions, or jobs focusing on business analysis win out for both.

This sections tracks the highest education levels typically reached by Founders and CEOs. As we can see, Bachelors degrees overwhelmingly lead the pack for both professions, but there is a slightly higher chance that CEOs will attain a Masters degree in comparison to Founders. Additionally, there’s a lower rate of Bachelors degrees in CEOs, as proportionally more of them tend to either go on to a higher education level or to stop at a lower one, like an Associates degree.

The following are the most common colleges attended by Founders and CEOs, discounting certain online for-profit schools like the University of Phoenix. NYU, Harvard, and USC rank in the top three for both professions, but the lists begin to differentiate themselves as they go on. For example, Founders’ colleges seem to include more Ivy League schools, while CEOs stick more to public universities; however, both lists still have plenty of schools in common.

This section looks at the most common college majors for Founders and CEOs, from which we can see that Computer Science and Communications majors rank a bit higher for Founders than for CEOs, who tend to have more business-/finance-focused majors.

What did we find?

The areas where Founders and CEOs seemed to have the most data in common were those related to education; while some interesting differences were found between the two, they both had lots of colleges, college majors, and overall highest levels of education in common, all at comparable levels.

That’s all we’ve got for now, folks. For more information on these positions, including advice on how to become a Founder or CEO yourself, check out our career information pages related to Founders and CEOs on the offical Zippia website.