Politics Isn’t All Political Science: What Governors Major In 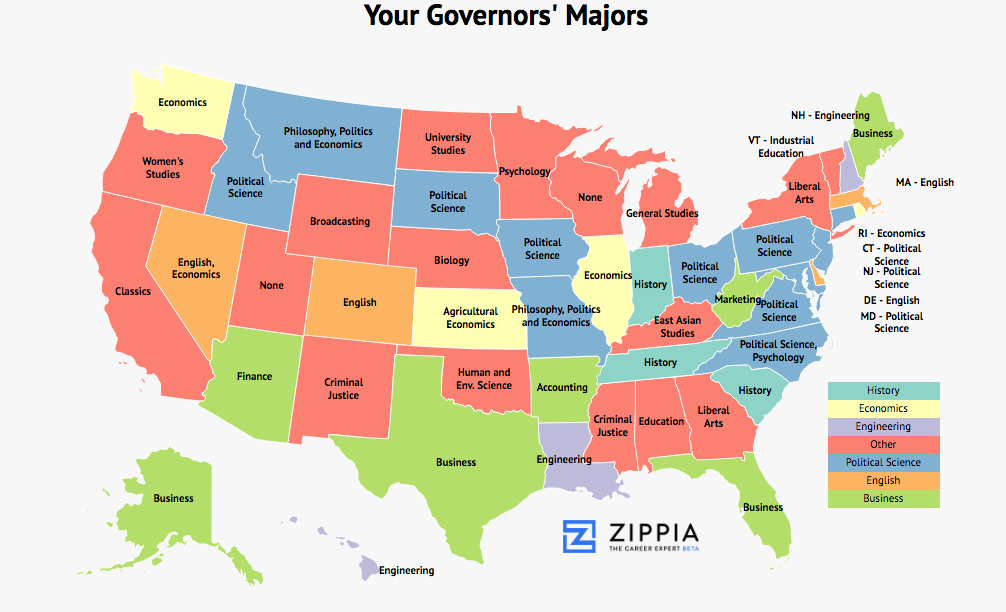 Ok, so you’re a realist — you don’t believe your elementary school social studies teacher and know you probably won’t be president. So you set your sights a little lower than the White House: the governor’s mansion.

So get ready to start kissing some babies (with parental consent), because we’ve mapped governors’ majors so you can see how your gubernatorial resume compares —that means your governor resume (you should probably know that).

We’ll have you sleeping in that governor’s mansion in no time — without a scandal, that is. And in case you change your mind or do get caught in a scandal, we’ve always got other options for you.

Some interesting observations off the bat

While there’s no sure-fire recipe for political success, there are definitely some patterns that emerge — and some counterintuitive findings as well. 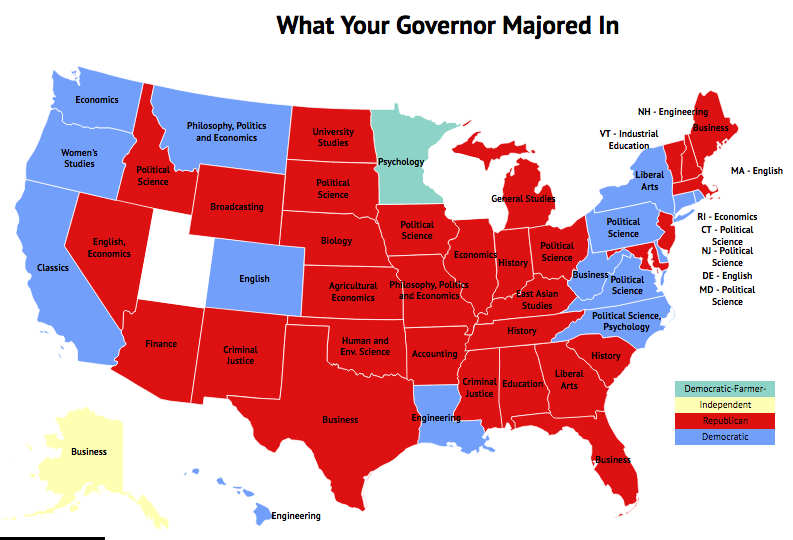 1. You don’t necessarily need a degree
To begin with, Governors Gary Herbert from Utah and Scott Walker from Wisconsin don’t have degrees at all — that’s why those states are empty on the map— which quickly demonstrates that there’s no secret sauce for gubernatorial success.

There’s also no secret Governor’s Program at any of these schools, because Dartmouth and Harvard are the only schools with more than one gubernatorial alum.

3. Not a lot of STEM degrees
Even though they’re in high demand pretty much everywhere else, there are only three engineering degrees and one biology degree in the whole bunch.

Some of the majors are the usual suspects

These are the most common majors for governors:

I suppose it makes sense that political science is the most popular major for governors — after all, everyone seems to want to find a job that makes use of their major. That said, when you consider that a governor is essentially the CEO of a state, the abundance of financially-focused majors makes sense as well.

And as the former governor of California can attest, being able to speak English is kind of helpful too.

There are a lot of law degrees

At times it seems like going to law school is a prerequisite for politicians — but I guess it makes sense that lawmakers know a lot about law.

Governors don’t make laws though, so it’s interesting that twenty-four of our governors have law degrees. And coincidentally, Political Science and English are two of the most popular law school majors as well.

There are also some unusual suspects

We have a few outliers popping up, which goes to show that you can always make use of your degree, even if it isn’t ostensibly tied to your first job or field.

Oregon Governor Kate Brown — Women Studies
Oregon’s population is 50.5 percent female and she won the election with 50.62 percent of the vote — coincidence, or not?

Kentucky Governor Matt Bevin — East Asian Studies
I’m not sure how this one helped him considering that Kentucky’s Asian population is about 1 percent.

North Dakota Governor Doug Burgum — University Studies
No, this one doesn’t mean he studied universities, it’s more or less what NDSU calls “undecided”. He went on to Stanford for his MBA and founded a successful venture capital company, so he decided a bunch of things eventually.

Kansas Governor Brownback — Agricultural Economics
Considering that agriculture accounts for more than 40 percent of his state’s total economy, it actually makes sense that Gov. Brownback has a degree in agricultural economics. He also has a law degree, so he pretty much fits the mold of a farmer politician.