Most Up-and-Coming Cities for Job Seekers 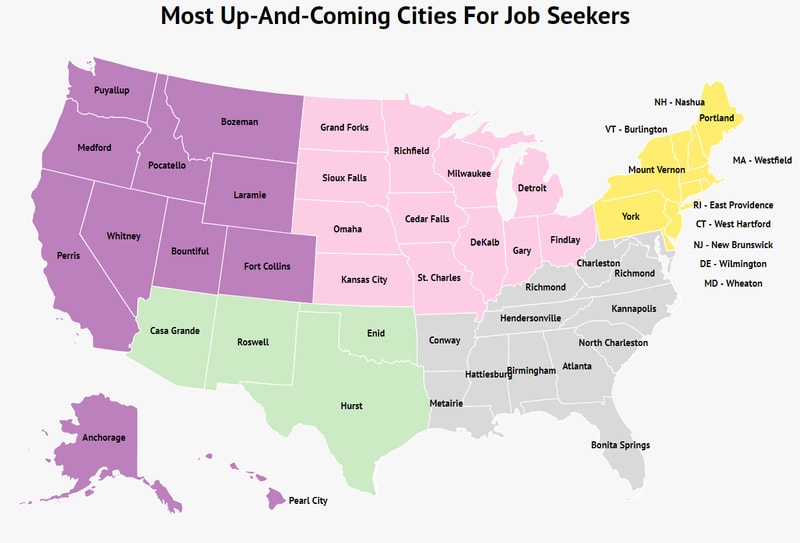 Most people know about the big cities. New York. Boston. San Francisco. Those are places that are, no doubt, booming with jobs.

But the U.S. has some best-kept secrets. Some cities have been quietly upping their job scene in the background.

It’s no secret that looking for a job is a long-tedious process that isn’t all that fun. So anything to make that easier is nothing short of welcome.

Zippia recently dove into data to determine which cities have recently increased their average salary, while continuing to decrease the unemployment rate. Those cities include:

The 10 Most Up-and-Coming Cities

Luckily there are cities that are promoting career opportunities all over the United States. So you don’t necessarily have to move where everyone else is just to find a job. The rest of the up-and-coming cities can be found in the table at the end of this article.

To determine the most up and coming cities for job seekers, we sought to find the cities that have seen the largest increase in wages– along with a steady decrease in unemployment.

All of our data came from the most recent 5-year Census ACS, and was then compared with the 2nd most recent ACS report.

While the unemployment rates do not reflect fluctuations in unemployment from the pandemic, they do give a picture of the overall economic health of the region. Only census-designated places with a working population of over 20,000 were looked at in our study.

Each factor was equally ranked. After ranking, we then selected the city in each state that was showing the most profound improvement.

This historic railroad city has a modern way of looking at careers. Perris, California, is the most up-and-coming city for job seekers. The city recently saw an 11% average salary increase, while its unemployment rate continues to decrease.

York has a revolutionary soul with a keen sense for business.

The second city on this list is York, Pennsylvania. The city being able to decrease its unemployment rate by 1.8% is no doubt a great asset. But really, the 13% wage increase is what we’re focused on.

The arts and auto industries aren’t the only eye-catching details when it comes to this Midwestern city.

Detroit may be known as Rock City to Kiss fans, but to us, it’s a city that has proven it has the potential to be so much more than that.

From increasing the average wage by 10% to decreasing the unemployment rate by 1.6%, you really should set your sights on Detroit for your career’s sake.

The city that does more than just encourage productivity. Chicago may steal the Illinois spotlight the majority of the time, but as far as we’re concerned, the windy city has nothing on the city of DeKalb when it comes to your career.

Recently, the city focused its efforts on the job scene there. By increasing wages by 14% and working hard to decrease unemployment by 1.3%, we can guarantee that DeKalb won’t let you down.

The city that’s bustling with opportunities.

Rhode Island has a city that it’s been hiding away from the world, but we’ve decided to expose it. East Providence is the fifth-most up-and-coming city in the U.S.

Why? Well, it may have just a tiny bit to do with the 8% wage increase residents have recently seen. And it definitely has something to do with the 1.9% decrease in unemployment.

A ghost town that’s making a comeback in a big way.

The (career) water is fine in Gary, Indiana. It’s time to dip your toes in. The city recently proved it’s the next up-and-coming city.

Residents noticed a 9% increase in their salaries and we took note that unemployment there dipped a whole 1.4%. Turns out, 2021 may just be the year for the city of Gary.

The home of the Cannon Ballers baseball team won’t let your career flop. Another noteworthy city worth your time is Kannapolis, North Carolina. As the seven-most up-and-coming city for job seekers, we got all the scoop on what makes this city so great.

In addition to an 8% wage increase, the city has been focused on lowering the unemployment rate. With a 1.6% decrease in unemployment, we’d say the city of Kannapolis has been successful.

Sunny Bonita Springs is dedicated to making sure your future is bright. The city recently supported an 8% wage increase, which immediately drew our attention. But it was the 1.4% decrease in unemployment that held our attention.

With a busy downtown scene, this city offers a promising career opportunity. A best-kept secret, Mount Vernon in New York has been rising in the ranks for job seekers. With most job seekers’ focus on NYC, your chances of securing a job in Mount Vernon are already high.

Now add in the fact that the city’s unemployment rate has decreased 1.4% and your chances skyrocket.

A city with an abundance of opportunities, as made clear by it’s name. There are bountiful job opportunities abound in Bountiful, Utah. Maybe that’s why this up-and-coming city is named that.

Either way, we’re impressed. With a 1.3% decrease in unemployment and an 8% increase in wages, this city is definitely making a name for itself.

Cities Worth Your Time

As a job seeker, we know how important and valuable your time is. After all, we know that filling out applications can take 51 hours alone.

That’s why you shouldn’t waste your time applying for jobs in cities that won’t even give you the time of day. These up-and-coming cities are taking strides to improve their job scene.

We’re giving them the recognition they deserve. It’s time for you to follow suit. These cities are guaranteed to give you the best job opportunities in 2021.

Most Up-and-Coming City in Each State