Male Vs. Female Jobs: Jobs Dominated By One Gender 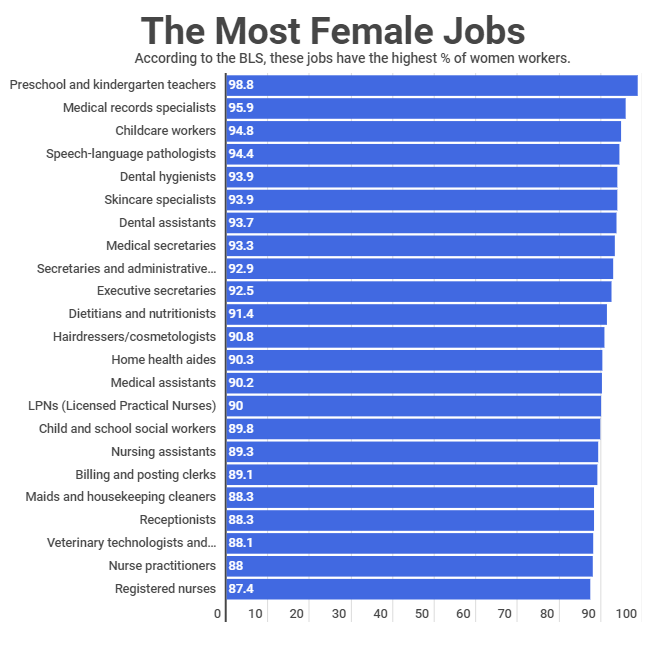 According to the BLS, 46.8% of the US workforce is female.

However, many jobs skew heavily male or female. In fact, your odds of getting a male Kindergarten teacher is about 1-in-100. Your AC broken? Only about a 1% chance the worker who comes to fix it is a woman.

Whether it is the due to stereotypes, society, preferences, or a little bit of all the above, some jobs are simply occupied by disproportionately by one gender.

Using data from the BLS, we highlighted the most male- and most female- jobs, along with what that just might mean for the job market.

A technical writer and insurance salesperson walk in a bar. What do they have in common? They, along with the bartender, are all about just as likely to be a man as a woman.

Below you can see a chart for the jobs with the fewest women workers. 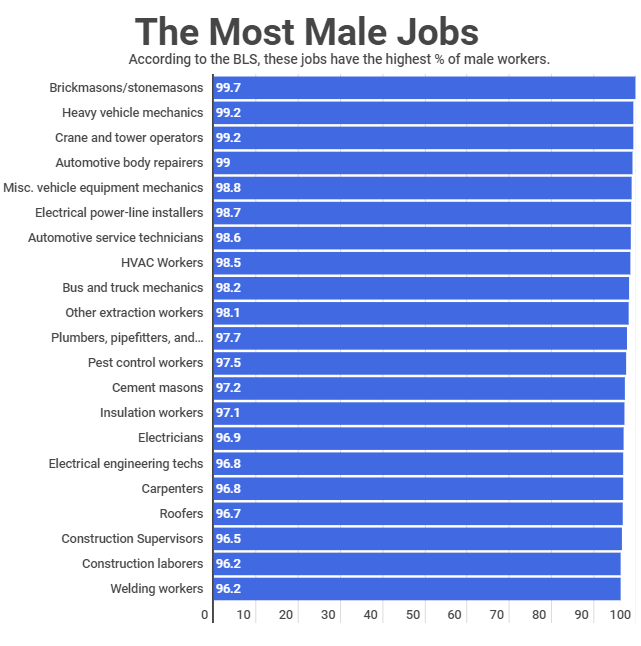 This data comes from the BLS’ most recent report on percent of female workers in over 500 job categories.

Some of the titles in the charts have been cleaned up for user readability.

Unfortunately, there exists a gender pay gap. Jobs dominated by women seem to trail behind those dominated by men in pay. The disparity only grows when you take into account level of education required.

A prime example of this disparity is teachers. While teachers in all states require a Bachelor’s Degree– and a Master’s in many- the pay is below the average earnings of other positions with these requirements. Similarly, even though nurses are in extreme demand, pay for healthcare positions dominated by women lags behind.

For a majority of these professions’ history, they were some of the few options available to educated female workers, providing employers with a glut of talent with little other employment avenues.

However, to remain competitive (or address employment shortages) both fields, among others, may need to focus on targeting half the population who is less inclined to apply.

Similarly, many of the trades face looming shortages. Yet, in some highly needed trades over 90% of workers are men. See the problem?