Editor’s Note: This is a guest post by Aléz Odendaal – a writer for Inspiring Interns, a graduate recruitment agency specialising in sourcing candidates for graduate jobs. Her opinions (and illustrations!) are her own.

There are few things as daunting as trying to find a new permanent job. But it’s something that recruiters often tend to forget.

When you’ve run your fair share of recruitment processes, and perhaps seen one too many cover letters, it’s easy to miss the enormous significance this kind of change has in an applicant’s life.

The result is that at times, hiring practices can become deeply troubling, leaving potential candidates with baggage they’ll take with them into the wider world, and eventually, their new jobs.

Hopefully you respect people’s efforts, and understand that a candidate has their own thoughts, feelings, and unique experiences that are affected by things that happen to them. These people are, after all, people. Human beings like you, who want the best for themselves and their loved ones.

A trend towards humane human resource management is evident in small start-ups, big corporates, and everywhere in between. Leaders in HR today are praised for thinking beyond the ordinary, and well beyond the bottom line.

You get the point. Now, here are five recruiting practices you must avoid if you want to put all those well wishes to good use, and take a more emotionally intelligent approach to hiring. 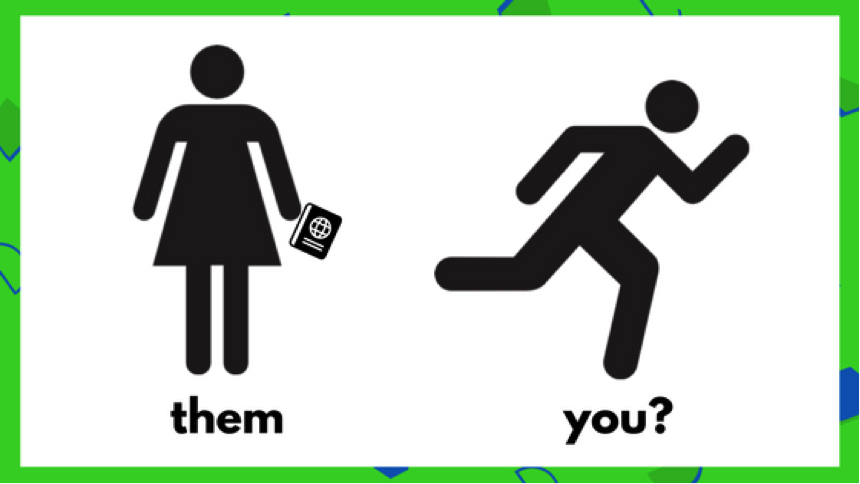 When the government issues someone a work visa, it’s because they have the right to work in a given country. This is often a hard-won status, which allows both the applicant and potential employers to overcome geographical barriers in the search for a position, or best employee for a role, respectively.

It’s as simple as that. While it’s obviously bad practice to be partial to candidates just because they are native to a country, this discrimination is incredibly widespread in a world facing Brexit measures or the Trump Administration’s aggressive immigration policies.

You need to actively fight against your own discriminations during the hiring process to understand how pervasive they are. It can be dangerously easy to miss your prejudice beliefs.

It might come down to something as plain as preferring one accent over another, or in this case, preferring a lighter workload over its alternative. Focus on what makes someone a good hire, rather than what choice will amount to the least amount of paperwork.

2. Refuse to give feedback 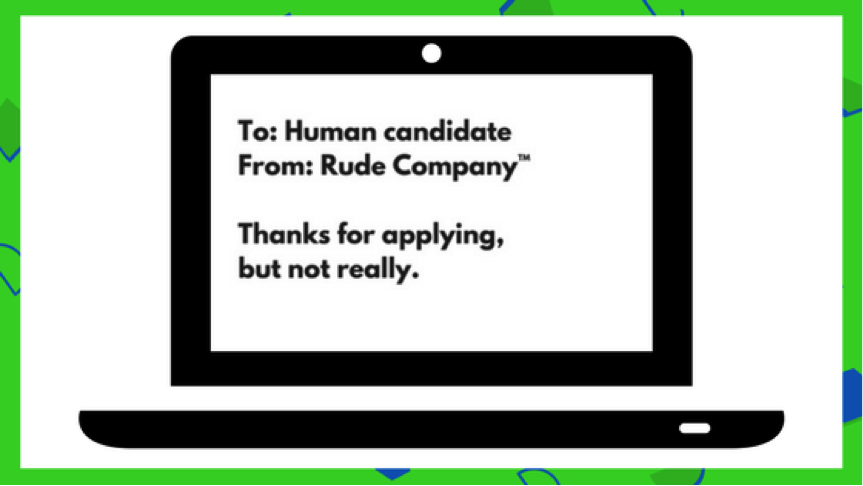 “Due to the large volume of applicants, we are unable to give individual feedback” …

“If you do not hear from us within two weeks, please consider your application unsuccessful” …

Recognise these phrases? Perhaps you have some of your own? Sure you do. You’ve likely written them yourself a few dozen times. No need to feel guilty – almost everyone does it, right?

That said, if history has told us anything over and over again, it’s that what is widespread is not necessarily good. Look past your own deadlines and think of the human being on the other side of application process; hungrily watching their inbox for any sign of reply from you.

Kindly-worded automated emails to unsuccessful applicants costs next to nothing in your time or resources. For those who have made it further than the first stage of recruitment, consider offering constructive feedback. It doesn’t matter if it’s short, it only matters that it’s there.

3. Ask candidates to do unpaid work you intend to use after the recruitment process 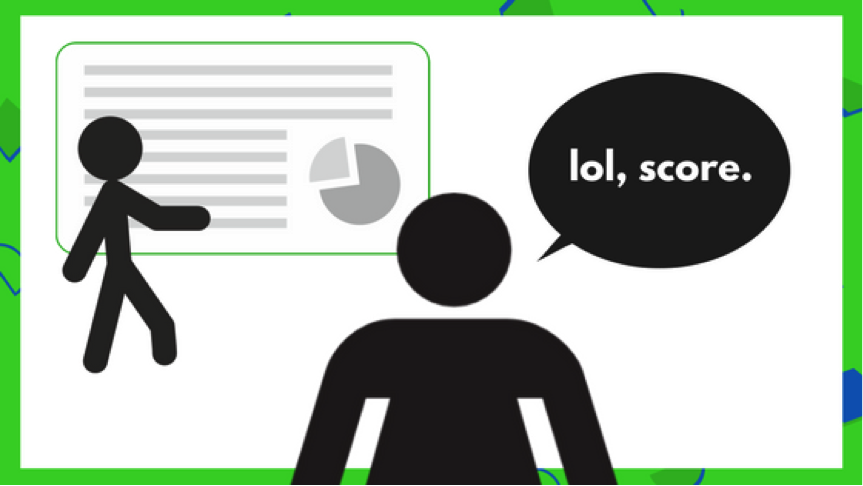 Often you will need to test a person’s suitability for a role by giving them a test to check for abilities relevant to it. This is completely fine. However, if you ever find yourself taking notes to pass on to your team during an applicant’s presentation, especially when you don’t have the intention to issue an offer, you are stealing someone’s work. Stop.

When you find something interesting in a candidate’s work, but don’t think they are suitable for the position, ask permission to use the information, being frank with what it will be used for. Then offer compensation. An interviewee puts billable hours into their output, and their presentations and proposals are earned with time they can’t get back. Treat them and their intellectual property accordingly.

4. Make allusions to flaws not relevant to the role 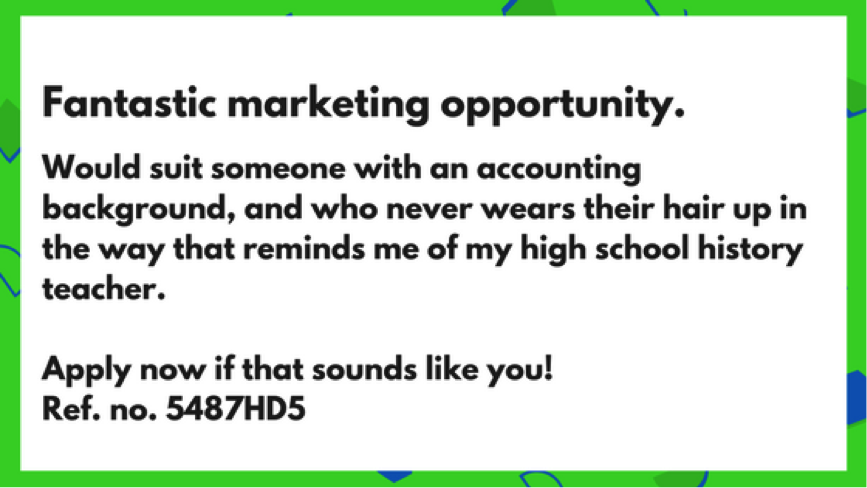 Recruiters, like human beings in general, often make assumptions about a person’s character based on external factors we think hint at the ‘reality’ of someone’s demeanour. Lack of eye contact, chipped nail polish, an asthma pump, vocal fry – all outward characteristics we tend to associate with certain types of people.

But again, with any luck, the civil rights movement and feminist efforts should have taught us that what we look like is not a reliable source of information on the kinds of employees we would make. Don’t confuse prejudice with a good knack for so-called ‘reading people.’

5. Put applicants into pay brackets below their experience 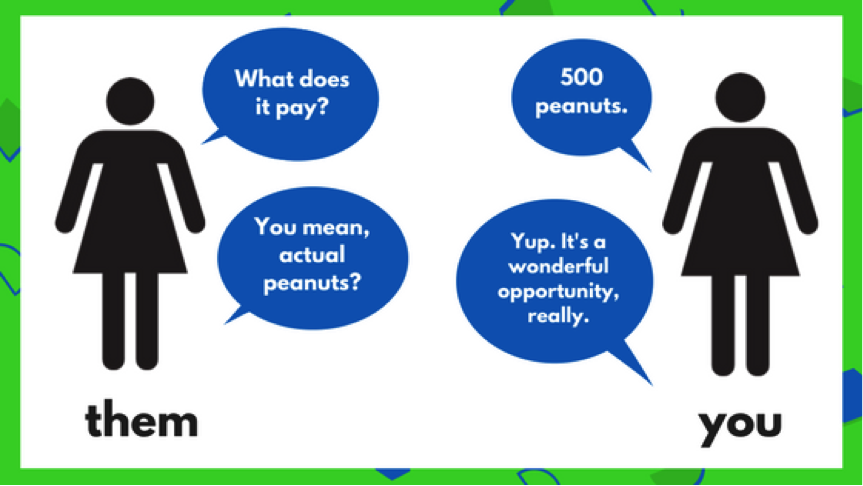 Whether it’s to get a nod from the company in question and receive better commission (if you’re an external recruitment consultant), or because all the suitable candidates are overqualified, it can be tempting to talk a candidate into taking a smaller salary than they are worth.

It’s been said before that negotiations are a good way for recruiters and potential candidates to find common ground to move from. But – and it’s a big one – they are not an opportunity to bully those without experience with them.

Aléz is a freelance writer living in London. She has written for GQ, GLAMOUR, MaximumPop!, Maxim, and many other names across traditional and new media.

Aléz is a freelance writer living in London. She has written for GQ, GLAMOUR, MaximumPop!, Maxim, and many other names across traditional and new media.