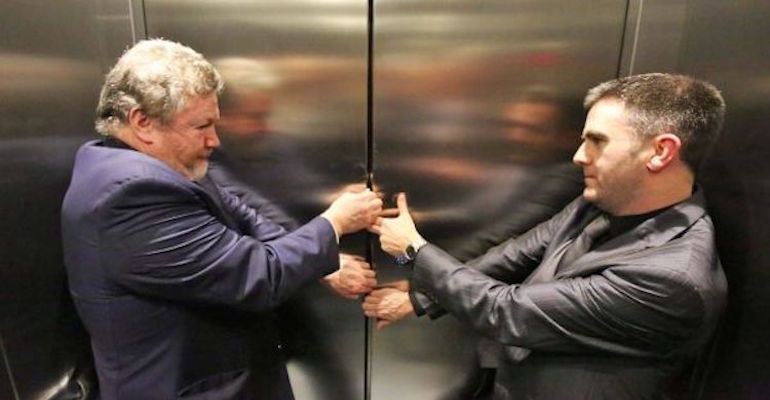 A Weevil Plague, A Gastro Outbreak, And A Temperamental Debt Collector

When I read Jenn’s blog post last week I was laughing to myself since I’ve also had my fair share of workplace floods over the years. I’ve actually also experienced a pretty epic office fire – but if you want to read that brave tale you’ll just have to get your hands on a copy of my book.

For anyone managing a team of people, any unexpected disruption to the day-to-day business operations can become frustrating. Sure we can probably all cope with losing Internet connection for 30 minutes once in a while (although some people do think that’s the end of the world); Skype crashing during a conference call (another first world crisis); or the even the air conditioning dying on the hottest day of the year (of course!).

But then there are some situations that a business owner or manager just can’t prepare for. Even the most neurotic, obsessive-compulsive managers (hello!) with back up business continuity plans in place can’t possibly anticipate everything.

I thought I’d share some of my own workplace disasters …

Putting the ‘dent’ into ‘confidentiality’ …

The team was expanding and we’d outgrown our office space. We’d found new premises on the other side of the city and had spent a small fortune on a very cool office fit out.

We’d arranged for the actual move to take place over a weekend and for the most part everything had gone pretty smoothly.

Monday morning came around and it was business as usual in the new office.

I was happy; everyone was excited; the energy around the place was great.

But as soon as candidates started coming in for interviews, it didn’t take very long at all to realise that there was zero sound proofing between the interview rooms (and we had 7 of them).

If you were sitting in one room, you could hear everything being said in the room next door. To be honest there may as well not have been any walls at all. They didn’t make any difference.

We weren’t getting off to a great start!

At first we tried piping classical music into the rooms. It hardly made a difference – although I’m pretty sure the candidates felt like they were listening to the Sydney Symphony Orchestra.

The quote we received to sufficiently insulate the rooms was almost the same as the cost of our entire fit-out.

Unfortunately the complaints department (me!) was suddenly very busy.

How could we be seen as a credible recruitment business if our interview rooms weren’t sound proofed?

As a last resort we eventually had ‘white noise’ installed into all the meeting rooms that could be adjusted on to a few different settings.

This meant that in one room you might have heard the sound of waves; in another room you may have been mistaken for thinking you were in a plane; while next door it may have just sounded like a muffled air conditioning unit.

But at least candidates couldn’t hear the interview going on in the next room and we wouldn’t land up in a legal battle over a breach of privacy.

Staff get sick. It’s a fact and there’s nothing you can do about it.

But I certainly wasn’t prepared for what would follow after one of the team had called me early one morning and told me she’d been up all night with what she thought was food poisoning. I thought nothing of it and told her to rest and that I’d see her the following day.

A few days later she was still bed ridden and by then a few others in her team had gone home “feeling really unwell”.

Can you imagine a gastro bug hitting everybody in a 45-person office?

Having lived through it, I can assure you it wasn’t just a case of a 24-hour stomach flu either. This thing hit hard and knocked people out for up to 3 or 4 days.

The strange thing was that it didn’t hit us all at once. But over that entire quarter (yep … for 12 whole weeks!) there was not one single day when the entire team was in the office. There were even days when entire business units were struck down.

We were submitting a proposal for a pretty major piece of new business. A group of us had been working on the tender document all week. It was Friday afternoon and we were ready to submit it.

This is going back a few years … to a time when you couldn’t simply email tenders through. Two copies had to be physically delivered and placed in a “tender submission box” at the client site.

The deadline was 5:00pm so our plan was to personally deliver it at 4:30pm and for the bid team to then head out for a quick drink to celebrate the end of a big week.

We made sure that both copies were bound and clearly labeled and the 3 of us got into the lift. The elevator doors closed, we started moving and then we just stopped suddenly.

To cut a very long (and somewhat claustrophobic) story short, we were stuck in the lift for over an hour. Sure we had mobile phones, but somehow (back then!) none of us could get reception inside the lift.

By the time we got outside it was nearly 6:00pm. I jumped in a cab to the client’s office (the traffic was shocking), but by the time I got there it was after 6pm and the main doors to the building were locked.

I called my contact but she’d already left for the day.

Anyone who has ever submitted a Government tender knows that a deadline is a deadline (how much do we love bureaucracy?!).

I hardly slept all weekend. But at 9:30 on the following Monday morning I was explaining what had happened to a very unemotional, non-responsive procurement manager.

She said she’d take my situation under consideration, but couldn’t guarantee our bid would be assessed in line with the others since technically I could have spent the weekend writing it, which would have given us an unfair advantage.

Seriously? Did she want a report from the fire department that had been called out on the Friday?

I mentally wrote off the bid.

Two months later we were advised that we’d been successful!

Could somebody please call the pest controller!

There was one year when the Easter long weekend went straight into the ANZAC Day public holiday so the office had been closed for 5 days.

We came back to work on the Wednesday to find that the entire office had been taken over by a weevil infestation.

They weren’t just in the kitchen cupboards … they were literally everywhere! In everyone’s drawers, crawling out of keyboards, I’m talking thousands of weevils! Of course anyone who had left an Easter egg on their desk got a bit more than a kinder surprise!

When the pest control guy arrived, he said he’d need to do an “industrial fumigation” and that the stuff was “pretty toxic” and it was “probably best” to keep away from the office for 24 hours.

The team’s long weekend just got longer … since this was a time before everyone had laptops and wifi!

Pulling the ‘temp’ out of ‘temperamental’ …

We’d had a really busy few months but at the same time our outstanding accounts had gone a bit out of control. I just hadn’t had enough time to stay on top of it all so I had arranged for a temp to come in to tackle the 60- and 90-day debts.

He’d been recommended as someone with a pretty good track record so I was happy for him to help.

Billy had only been on the phone for about an hour before I started hearing him shout.

“What part of just pay the f*#*ing invoice don’t you get!”

I went straight over and told him that I wouldn’t tolerate that sort of language. He seemed to understand.

About 25 minutes later I heard him shout again.

“If the money’s not in our account by Friday I’m prepared to wait in your reception with a baseball bat!”.

Needless to say I wouldn’t be taking recommendations like that again.

Perhaps I should have named this anecdote ‘Putting the ‘mental’ into ‘temperamental’ instead?

I had to go into some pretty serious damage control. He’d actually threatened one of our biggest clients and they weren’t happy.