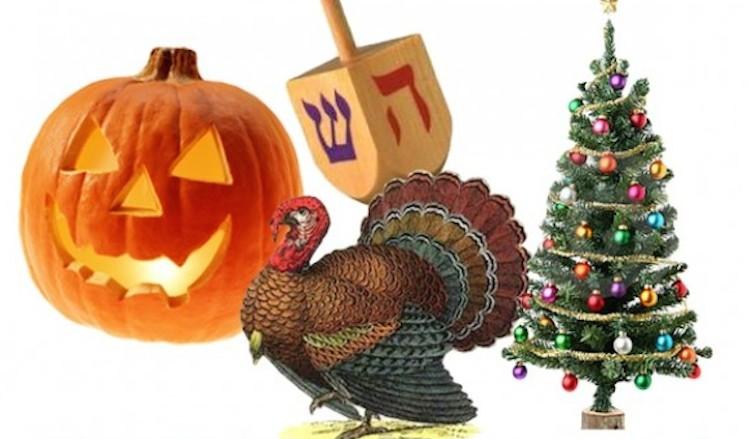 How Recruiters Can Stay Focused During The Holiday Season

There are ads on TV featuring turkeys spinning dreidels; carols are piping through the shopping malls; people are wearing those crazy reindeer antlers in the streets; it’s already snowing in parts of the USA while temperatures are starting to soar across Australia …

Last week I even went to my first Christmas party for 2017. Seriously … In the middle of November!

I’ve already started receiving emails that are signed off “All the best for the festive season”, “See you in the new year”, “Happy Holidays”, and “Merry Christmas”!

Putting aside the fact that I don’t actually celebrate Christmas, I’m sure I have surprised a few clients in the last few weeks by sending an email straight back in response to their jovial holiday sign-off.

“Let’s make sure we catch up before the end of the year. We’ve still got about 6 weeks to go. I’m working until Friday December 15th. When’s good for you?”

And guess what? I’ve already been able to lock in a few coffees, lunches, or general catch-ups!

I can assure you I’m no ‘Scrooge’, but I have always felt that from a recruiter’s perspective anyway, having a flat or ghostly quiet Holiday Season can often become a self-fulfilling prophecy. It’s a mindset thing.

It’s only “dead out there” (as I’ve already heard a lot of people tell me) if you allow it to be.

Here are a few tips to help you stay focused, keep busy, and believe it or not perhaps even make a placement or two in the last few weeks of the year.

1. ‘Twas the night before Christmas …

I can remember many years ago I received a call from candidate on the 23rd of December. The company she had been working for had unfortunately had to close down and along with all her colleagues, she had just been made redundant.

Abigail had only been working there for about six months so she didn’t really receive much of a payout.

She was jobless. She was a single Mum with two kids. She’d seen my ad in one of those weekly magazines that got handed out at train stations back then and she’d given me a call desperate for help.

I asked her to come in first thing the following morning for an interview. She was a really good candidate.

I had no idea which (if any!) of my clients would be working on Christmas Eve so I just started calling them all.

It turned out that quite a few of them were working; two of them asked me to send (fax!) her CV through; one of them asked her to come in that afternoon and offered her a temp role starting on the 27th and if things went well the position would become permanent.

Who says nobody hires in the Christmas week?

2. Get in front of as many clients as you can in the next few weeks

Sure your clients might not have any actual job briefs for you to work on right now. But do you know what their hiring plans are for next year?

Call your clients and make a time to see them ideally in the next couple of weeks. Be up front and tell them you want to catch up to talk about their growth plans for 2018 because you want to be top of mind and that you’re ready to help out.

Just because your clients might not be busy physically recruiting at the moment, they’ve still got businesses or teams to run. They’re still going to work. And they’ve all got to eat and most will probably need a coffee at least once a day in the next few weeks.

So pick up the phone and book in a time to catch up.

If for whatever reason they are super busy, or they are taking time off, then arrange a meeting with them in early January.

Some people are afraid to suggest a meeting for ‘next year’ … like it’s some far away mysterious place! January the 1st is just another date on the calendar. So bite the bullet and don’t be afraid to be their first official appointment for 2018.

3. Reconnect with your candidates

Anyone who has ever worked with me knows that I really dislike the phrase “touching base”.

But this time of the year really is the perfect opportunity to reconnect with all those candidates you haven’t spoken to in a while.

How many really strong candidates have you interviewed this year? How many of those did you actually place?

So what happened to the rest of them? Give them a call and find out how they are, what they’ve been up to, and what their goals are for the year ahead. If you don’t call them, it’s pretty unlikely that they’re going to call you to share their career plans for 2018.

You never know what you’ll find out. Sure some will be very happy in the job (you didn’t get them); some might ask you to keep them posted on any suitable opportunities that arise; gosh a few might even tell you that they’re just hanging around for their end of year bonus after which they want to get the hell out.

There’s a perfect pre-Christmas reverse marketing opportunity for you right there!

You’ve got nothing to lose.

If Santa can make his list (and check it twice!), you can make a list of 50 candidates and call 10 of them each week between now and Christmas.

You might even find out who’s been naughty and who’s been nice! … Sorry I couldn’t resist!

4. Go and visit all your temps

While this might seem pretty damn obvious, believe it or not there are many temp recruiters out there who don’t go and visit all their temps at this time of the year.

And I’m not just talking about dropping off a chocolate Santa, Christmas pudding or some other mass produced gift.

This is also the perfect time to sit down with them and find out what’s going on in the business. Your temps are your spies on the ground on site at your clients. Trust me they’re not going to call you to tell you there are temps working with them from other agencies, what new accounts are being won, or who has recently handed in their resignation. But if you ask that’s an entirely different ball game.

Of course if your client sees you out visiting your temps, it puts you top of mind with them too (again I hope I’m stating the obvious here).

5. It’s time to get a bit personal

Years ago I would go out and visit clients in December and it would be like walking into a Hallmark factory. There would be Christmas cards everywhere … on their desks, pinned on boards, stuck on windows, hung up across the office.

Today it’s all about the e-card … maybe a dancing Santa with your face embedded?

As a recipient of lots of these, I know they’re funny but they just get deleted and many end up in spam anyway.

Your clients have potentially paid thousands of dollars for your candidates and you’ve probably received some very nice bonuses in the last 12 months. So don’t you think a nice, personally hand written card “Wishing you and your family all the best for 2018” might be nice?

So if you really think it’s dead out there, start writing!

If your card is sitting on their desk, who do you think is going to be top of mind as 2018 rolls around?

Working as a recruiter in an agency environment in the lead up to Christmas can actually become quite stressful – especially if your manager is in the office too. The phones typically aren’t ringing off the hook; there aren’t too many fees being put up on the board; so the question often becomes “So what’s Paul actually doing here? Am I paying him to sit on Facebook all day?”

After all there’s only so many times you can walk around the office holding a clip board, looking busy by grabbing stuff off the printer, or being so fast to answer the phone when it rings that people might start thinking you’re in training to appear on Jeopardy!

Trust me, it feels good to be genuinely busy while most other recruiters will have taken their foot off the accelerator at this time of the year.

Now that’s a reason to sign off your emails “Happy Holidays”!