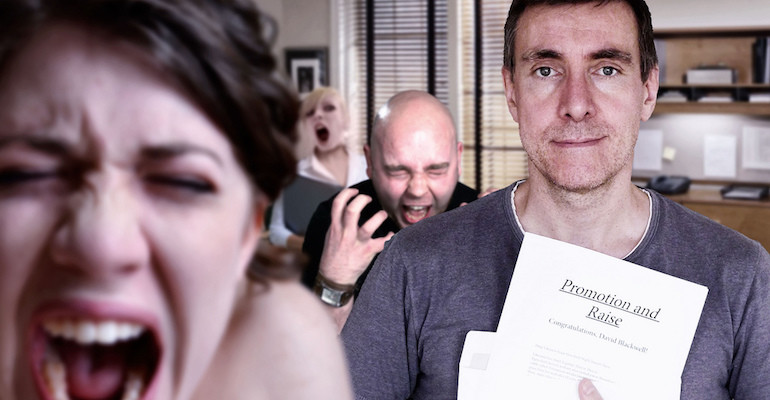 How to Deal With Delusional Expectations in the Workplace

Consider the following scenario. You run a business or a team and in one of your regular Friday end of week wrap-ups with one of your long-term team members, you confidentially tell her that another senior team member in the business has handed in his resignation.

You also tell her that you haven’t decided whether you will start to look externally for a replacement, or promote from within. There’s no real rush since he actually gave 2 months’ notice and he isn’t going to a competitor so you won’t be walking him out the door.

Now you have no idea at all that she wants his position – not instead of her current role, but over and above it.

Rather than telling you there and then that she wants to be considered for his role, she takes a slightly more strategic approach.

Over the weekend she sends you an e-mail requesting a meeting on the following Monday morning to discuss the opportunity of transitioning into a dual role and taking on more responsibility.

She spends time carefully preparing her case, highlighting her achievements within the business to date, and the reasons why she feels she should be considered; her rationale for wanting the additional responsibility; a picture of her ideal career path within the business; and finally, a carefully thought out transitioning strategy.

She knows her timing is right and she feels confident presenting her case to you.

Her strategy works since you agree to move her into a role that will see her supervising 2 teams, thereby fulfilling her career aspirations.

Over the years I have witnessed many instances where people have been too scared to ask for a promotion because they felt their manager would either think they weren’t quite ready or perhaps their request might be seen as an indication that they’re not really happy in their current role. Then, when overlooked, they became jaded, and in many cases, left their organisation.

The notion of promotion can differ depending on whom you ask. For some of your team it may mean more responsibility. For others it may equate to more seniority and a new title on a business card.

However, it’s important to note that neither necessarily guarantees that it will be accompanied by a salary increase.

If someone approaches you in your organisation wanting a promotion, you need to seriously consider whether they are in fact looking for a promotion, or a new job entirely – one that may in fact only exist beyond your company’s walls.

On the flip side, just because a team member has discussed the idea of taking on more responsibility, or has even formally presented their case and asked for a promotion, there is still the possibility that you may decide to decline it.

As a business owner or manager, you may one day encounter any (or all!) of the following personality types … especially when it comes to a promotion or a pay rise.

This type of individual will have no problem at all telling you (often out of left field) in a meeting that they expect a pay rise or a promotion. They may not even be able to substantiate their reasons other than they just feel completely entitled to it.

I remember once receiving an email from a team member 3 months after she started that simply said: “I expect that by June you will promote me to Team Leader”.

Just between you and me, June came and went. So did she!

If you don’t react, or if you perhaps choose to challenge ‘The Expector’ in some way, he or she may then morph into an ‘Ultimator’.

Once again coming from personal experience, during this transformation you should then be prepared for an email along the lines of: “If you don’t promote me then I will have to reconsider my place here”!

Needless to say it’s then entirely up to you how you decide to respond.

Have you ever been a long drive with a child who cannot stop asking “are we there yet?”

Perhaps you may have even been one of those kids!

It’s bad enough dealing with an ‘Expector’ or an ‘Ultimator’. But then if you don’t give them an answer straight away, or if you tell them you will re-assess the situation in six months, it will become worse than a long drive.

You’ll be met with the ‘Whinger’ who will ask “how much longer?” in every single 1:1 catch-up you have with them between now and then.

Unfortunately I have had the privilege of working with quite a few such individuals.

They had earned the title of prima donna within the business; they treated their colleagues like sh*t, and yet they still asked for a promotion – not realising it would almost certainly fall on deaf ears.

And indeed it did.

Warning: The ‘Delusionist’ lives in their own self-centred universe so just be ready to exert ‘tough love’. And trust me, when (not if) they leave because you don’t grant their wish when they click their fingers, you (and the entire business) will be much better off.

Don’t let yourself be fooled by these individuals!

The ‘Opportunist’ will ask for every possible promotion within the organisation. But don’t think for a minute that they are ambitious, driven or even remotely committed to you and the business.

Scratch beneath the surface and their true motive is simply reinforcing that they have no real sense of career direction at all and in turn, no credibility behind their requests.

How you choose to handle the approach to promotion or pay rise by these different ‘corporate characters’ is entirely up to you. As long as you are fully aware of the thought processes (and strategies) of each of your individual staff members when it comes to their own career advancement.

Apps That Can Boost Employee Productivity
6 Types of Employees and How to Motivate Them [Infographic]
How to Conduct a Proper 30-Day Post-Hire Checkin
How The Big Companies Hire
How to Retain Top Performers When They Hit the Top of Their Pay Grade
How Well Do You Articulate What You Do?