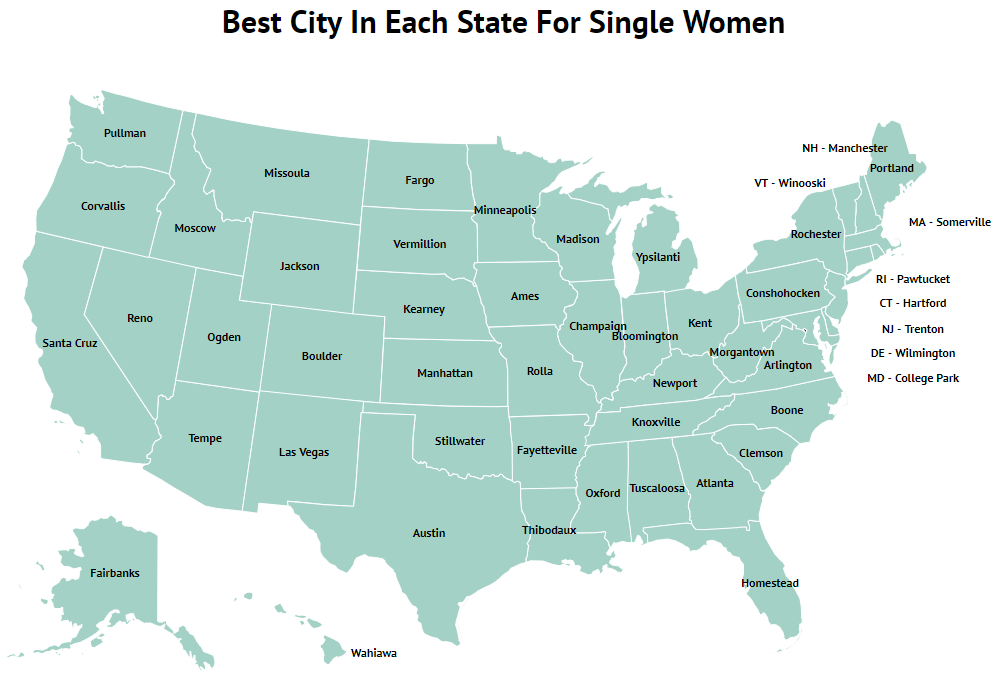 The Best City In Each State For Single Women In 2019

Are you a single woman who’s tired of going on terrible dates?

Would you rather sit at home in your pajamas and watch another episode of “The Handmaid Tale” rather than go out to a bar and meet some random guy who’ll talk about himself the entire time, without asking a single thing about you?

Have you swiped left on what seems like an endless onslaught of awful men that the online dating app you use thinks you might be interested in?

Or maybe you happily single but wish there were other single people to hang out with, do cool stuff like bar-hopping and farmer’s market trips with?

If you answered yes to one or more of the above question, then this list is for you.

Here are the top 10 cities in America:

Maybe it’s time to move to a city where there are other women like you, who are also looking for the same things you are.

Summary of our findings

How we determined these rankings

We considered a lot of criteria for this one in order to get the best, most complete results possible. Using the 2013-2017 American Community Survey Census data, we looked at every single city in the nation with a minimum population of 5,000. We paid particular attention to:

We predicted that a combination of demographics with the numbers per capita of cool places such as bars and farmer’s markets to hang out and meet people would give us the most comprehensive list of cities.

Want to know more about each of these ten cities?

Not only is Minneapolis the largest city by population on our top 10 list, it is also the city with the highest median age of 32, which is indicative of the major metropolis that it is.

What is also great is that only 30% of the households are married households, and the population is pretty equally divided between male and female.

There are also a huge number of bars and farmers market if you are looking for places to go and meet other single people.

College Park is second on our list, and that’s partly because it is a student town, with a median age that’s slightly under 22.

There are also 53 men to every 47 women, so if you are looking for a bigger pool of men, College Park could be the city for you.

It also has no shortage of bars. With a total of 25 bars for a relatively small city of 32,000 people, it has the second most number of bars per capita on our top ten list.

The City of Somerville is another college town, and there are a few reason to move here, if you are a single woman.

Somerville is very evenly divided into male and female, and only 30 percent of the households are registered as married households.

It it is also very densely populated, which makes it highly walkable and bikeable.

Tempe, AZ is home to Arizona State University, and it is a mid-size city, which is considered a suburb of Phoenix.

Not only are there a ton of outdoor activities to choose, Tempe also has a good number of bars and single people to go to the said bars with.

Also, listen up single ladies wanting to mingle with single lads, there are more lads then us ladies in this city.

Another college town makes it to the top ten, and this time it’s Clemson, SC, home to the Clemson Tigers.

Clemson’s median age is around 24, and about 48% of the population is female.

Consider that alongside the second most bars per capita on our top ten list and only 30 percent married households, and it is not hard to imagine why this city of 150,000 people is number five on our list of best cities for single women.

Rochester is the third largest city on our top ten list with a population of 210,000 people.
The median age is 31, and there are more women than men in this upstate NY city.
So if you are happy being single and fabulous, then Rochester could be the city where you make new single girlfriends and explore what this very diverse city has to offer.

Ypsilanti is a pretty small city of about 20,000 people, and I personally think single women should move here because the Ypsilanti Water Tower holds the unique distinction of being the winner of the “Most Phallic Building” Contest. Locals call this tower, “the brick dick.” Seriously, I’m not kidding.

If that doesn’t get you to move, then perhaps the fact that only 20 percent of households are registered as married households may sway you.

Conshohocken is the smallest city in terms of population on our top ten list with less than 8000 people.

However, it is a riverfront suburb of Philadelphia, so if you want to get away from the chaos of big city, but still be in a city where you are not surrounded by mostly married couples preoccupied with kids and family responsibilities, Conshohocken could be the city for you.

The mountain city of Boone in North Carolina is easily one of the prettiest cities on our top ten list.

Nestled in the Blue Ridge Mountains in Western NC, Boone is home to Appalachian State University, which explains it’s median age of 21.

Only around 15 percent of the households in Boone are registered as married, and with a ton of outdoor activities to choose from, Boone is a great place for adventurous single women.

The second largest city in terms of population, Madison is on this list for a lot of different reasons.

Madison has been consistently ranked one of the best cities in America in a number of categories, and it is not a surprise that it is a great city for single women. There are plenty of options when it comes to bars, live music venues, farmers markets, and outdoor activities to suit most women’s needs.

So there you have it. If you are a single woman looking to move to a more exciting city, we hope you can find your perfect match.

Go out there and have a great time in the city of your dreams.

And If moving cross country is not your cup of tea, then check out which city in your state is best for single ladies. You’re welcome!

Best City In Each State For Single Women