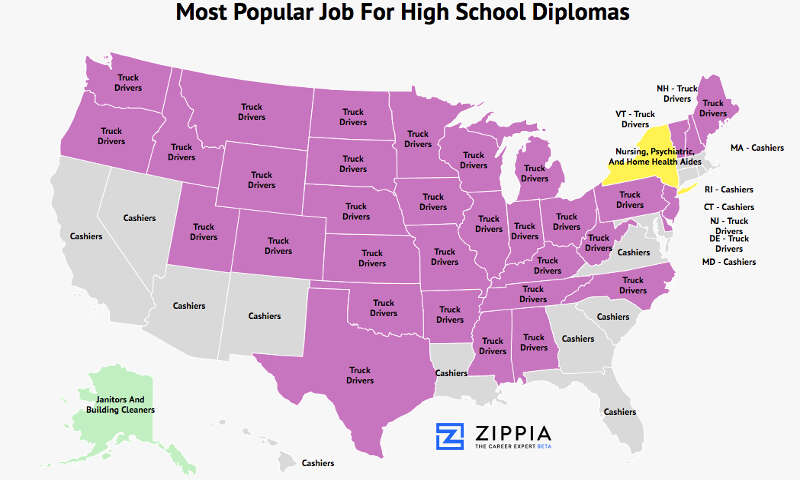 The Most Common Jobs for Every Education Level

You don’t have much of a choice anymore if you want to secure employment, at least according to the Bureau of Labor Statistics: jobs for people with bachelor’s degrees are projected to grow twice as fast as jobs for people with just high school degrees over the next ten years, while manufacturing and retail jobs are going to shrink significantly.

We wondered how much these developments would affect current and future job seekers, so we looked at the jobs that people of every level of education hold, not just a bachelor’s degree. What we found was that the first and second most common job for each level of education in each state tended to be dominated by one or two professions (mostly teaching):

Read on to see what the most popular jobs are in your state — you’ll most likely find yourself both surprised and disappointed.

Far and away the most common job for people with high school educations is driving a truck. Considering the relatively high median wage of $40,260 and the need for them in every state, this actually makes sense.

So kids, unless you’re in love with either using coin-operated truck stop showers or with cleaning them, take higher education seriously.

Associate’s: necessary for nursing, not for retail

Ok, so, yeah, there’s a lot of purple for this map too. In 48 states, registered nurses are the primary holders of associate’s degrees, with no one else really coming close.

Consider that, then consider the second map, which shows that the runner-up is more or less retail sales associate — this suggests that most people with associate’s degrees wind up working in retail. We found this surprising, as we expected to see more trade and craft-related jobs here, such as welders and plumbers.

Going into healthcare has always been a safe bet, and the latest BLS data shows this will hold true for the next ten years: almost one-fifth of the net new jobs to be created by 2026 are in healthcare.

I’ll let you draw your own conclusions about the value of a non-nursing associate’s degree.

The bachelor’s map looks similar (even that awful purple), except with teachers supplanting registered nurses, who still have a strong hold (pay and authority hikes come with having a bachelor’s of science in nursing).

Teachers taking over this map isn’t terribly surprising.Teachers are in demand in pretty much every geographical location, which explains their broad prevalence — also, teachers are almost universally required to have a bachelor’s degree.

The second map, however, is a bit more eye-opening. The Midwest is bizarrely filled with secretaries and administrative associates, while the rest of the country is mostly comprised of people in sales. What gives?

Well, we don’t know. These positions likely don’t practically require higher education, but the current job market has made a bachelor’s degree a requisite for most desirable positions. So while a degree in sociology might not be necessary for sales, it is for a sales job.

Master’s Degree: All in education

This one was a shock. It’s thankfully not that awful purple color, but in literally every state, the most popular job for someone with a master’s degree is teaching. While teachers do often get pay hikes for having a master’s degree, it’s rarely a requirement for a position.

But what’s most impressive, is that this first map, the one that just says teachers, is just referring to elementary and middle school teachers. The second-most popular job for people with a master’s degree in most states is high school teachers, closely followed by professors and counselors.

So with the exception of three states where software designers take the second place ranking, it’s all education.

Professional: Ever here that there are more law students than law jobs?

This category is a bit more complicated, since technically these degrees are doctorates as well. We felt inclined to include it because (1) we could and (2) the PhD map is a little monochromatic as well.

The variety of degrees that qualify as professional is fairly slim, and we more or less expected the results we got — but even then, teachers show up as the second most popular job for people with professional degrees in eight states. Our only guess at this point is that some people “retire” into teacher.

Education, back at it again — college professors are the most popular in all states but one, supporting the assertion that doctoral programs, unlike undergraduate ones, are job training for professors.

Wyoming is the only state where the most common job for PhDs is not college professor (physicians won there) — but then again, they only have one university.

The second map shows healthcare professionals and lawyers popping up frequently again, with the interesting addition of clergy and, you guessed it, elementary and middle school teachers again.

What to make of it

One way to read this is that if you want to get a job with a given level of education, you should be aware that these are the jobs you’re most likely to get. That said, our data covered every job for every age group, so if you’re entering college or the workforce you are by no means confined to these jobs.

But at the end of the day, pay attention to that BLS data that says you need to get a degree, because its last job growth forecast predicted the massive growth in Education and Allied Health to the percentage point.