These Are The 10 Most Boring States In America For 2018 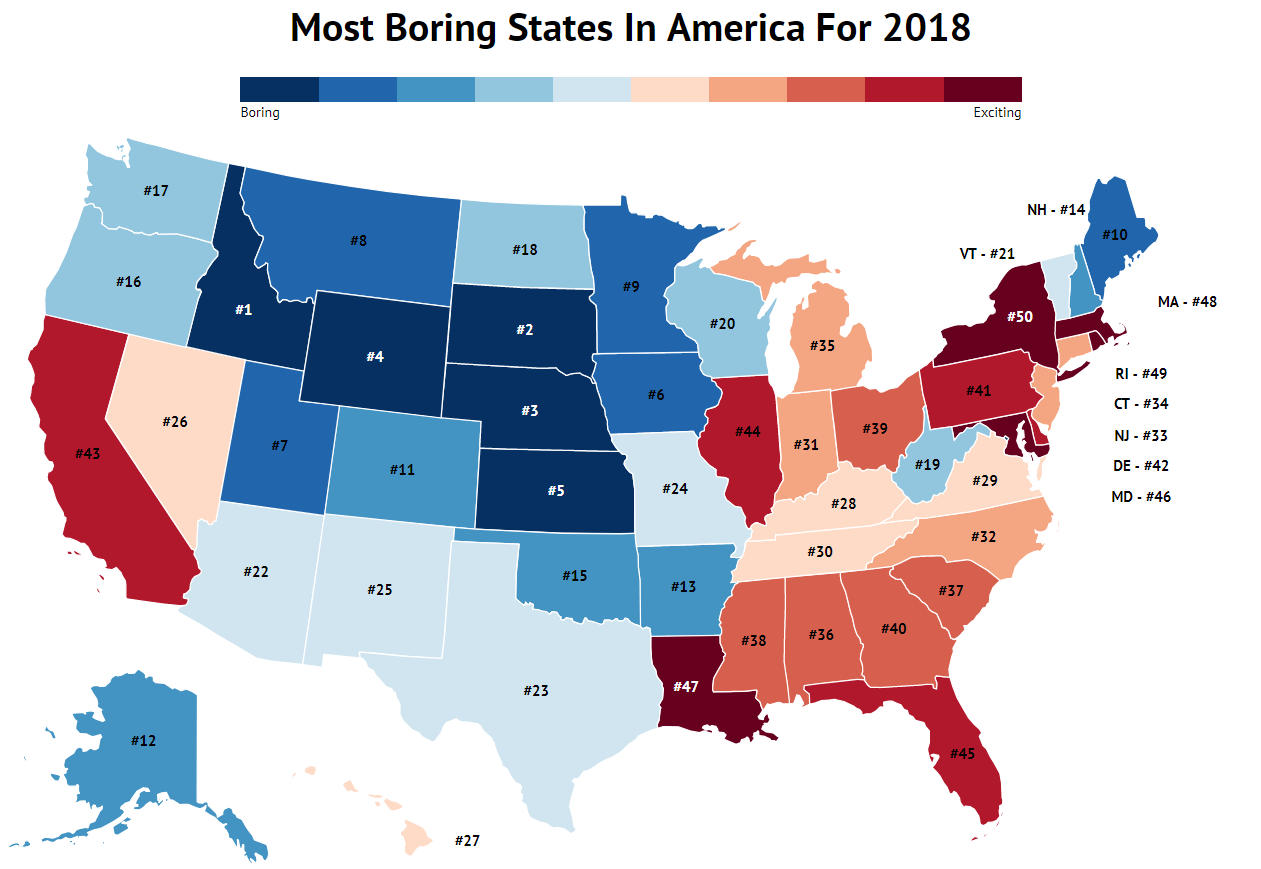 Parties on the beach.

Something to do every second of the day.

You’ll find none of those things in the states we are talking about today — the most boring states in America.

These are the states where your grandpa will fit right in talking about how life used to be back in the slower, good ol’ days of their youth.

And before you go thinking we mean this as some kind of insult, let us assure you that we’d be happy to pack up and move to Idaho — the most boring state — so we can work on our data analysis all day without all these crazy kids running around.

If only our husbands and wives would let us.

So without further ado, here’s a look at the most boring states in America:

Like we mentioned, Idaho wins the bridge tournament for 2018 coming in as the most boring state in America. Turns out most of the state is married people with kids that like potatoes.

Don’t quote us on the last part, but feel free to read on to learn more about our methodology and for details on the top ten.

When it comes to understanding what’s boring, what’s better than a bunch of data nerds that geek out to the latest release of Labor Statistics data, right?

Coming in with that perspective, we basically just had to figure out what people tease us about around the office to understand what makes us boring — old married people with kids in the ‘burbs (For example, I’m an 80-year-old grandpa stuck in a 31-year-old’s body).

We then went to where else but our second favorite data set, the Census Bureau’s most recent American Community Survey data spanning from 2012-2016 to look up the following boring criteria that maps to the adjectives above:

Still awake or have we bored you to death yet?

Any ties went to the smaller state.

It’s always good when data matches your intuition and it turned out that Idaho is the most boring state in the union for 2018.

Read on to see why exactly Idaho is the perfect spot if you’re me. A quick Google search of Idaho stereotypes lands you on articles that go into detail about how about State Senators live in trailer parks and that Idahoans eat meat and potatoes. You know, boring stuff.

Our data ranked Idaho as having the second highest percentage of married people (Behind only Utah… which we’ll get to later) and a seventh-place finish for both density and households with kids. There are two things I knew about South Dakota before I started writing this article — it’s home to Mount Rushmore and it’s south of North Dakota.

After writing this article, I now know that that’s basically all there is to know about South Dakota.

Yeah, pretty boring (Unless you like the outdoor rugged lifestyle of the Badlands. Then it’s not so boring). You can think of Nebraska as Idaho lite — basically the same ranking factors landed it here, but with oh so slightly more excitement.

The craziest thing that happens in Nebraska occurs when you make a big bowl of chili and pair it with a cinnamon roll. Because how more Midwest can you get than that?

To be fair, I would definitely try it. There’s literally nothing to do in Wyoming — the second least densely populated state in America to a vast tundra of ice that is Alaska.

And while I’m using the term literally to mean figuratively, Wyoming does have a ton of weddings (3rd highest rate) and plenty of cowboys.

But when you measure the distance between places in hours instead of miles, you know you’re probably going to get bored eventually. Based entirely on my mental map of America, it seems that the more rectangle shaped a state, the more boring it is. Kansas for example, is a rectangle and it has four points of boring.

I’d read off the stats, but they are boring me — all these Midwest states are essentially the same shade of dull.

So instead let’s talk about the most exciting thing happening in Kansas — the BBQ. Yes please. Oh man, the first slight change in the statistics behind why a state should end up in the top ten! Iowa isn’t boring because it’s all married people with kids (although there are a fair number of those).

No, Iowa is boring because… drum roll… it’s old!

Well, old is relative as it’s older than the vast majority of the top ten, but not like oldest people in America old (That’s Florida for those playing at home). It turns out that Utah has the fewest percentage of people over 60 in America.

That’s a lot of people doing nothing on weekends but going to museums and church. As excited as I was to write that blurb about Utah, Montana brought me right back down to snoozeville.

It’s like if you moved Florida to the middle of America and gave everyone a ranch instead of a condo on the beach. There’s a saying in medicine that a test can come back as unremarkable and that’s a good thing — for example a brain scan.

Minnesota took our boring test and came back unremarkable. That’s kind of impressive when you think about it for a quick second.

The North Star state was slightly more boring than average for each criterion without being overwhelmingly boring in any. Well hey now, we have arrived at a coast for first time on our tour of the most boring states in America.

And while we may be on the coast, it’s not really one of those coastal states you’d ever really see in the news.

Maine is home to the second oldest percent of the population over 60 in America and surprisingly, to me at least, the fewest percent of households with kids.

So now I picture Maine as just a bunch of old people living in cabins eating lobster.

Winding Down After That Super Exciting List Of Boring States

Well, we hope that you enjoyed reading a list of the most boring states in America.

That kind of sounds like it shouldn’t be possible.

Here’s to settling down with the kiddos at bedtime, reading a book, and putting to rest the argument of the most boring state in America.

Detailed Ranking Of The Most Boring States