The Most Weirdly Popular Halloween Costume In Each State 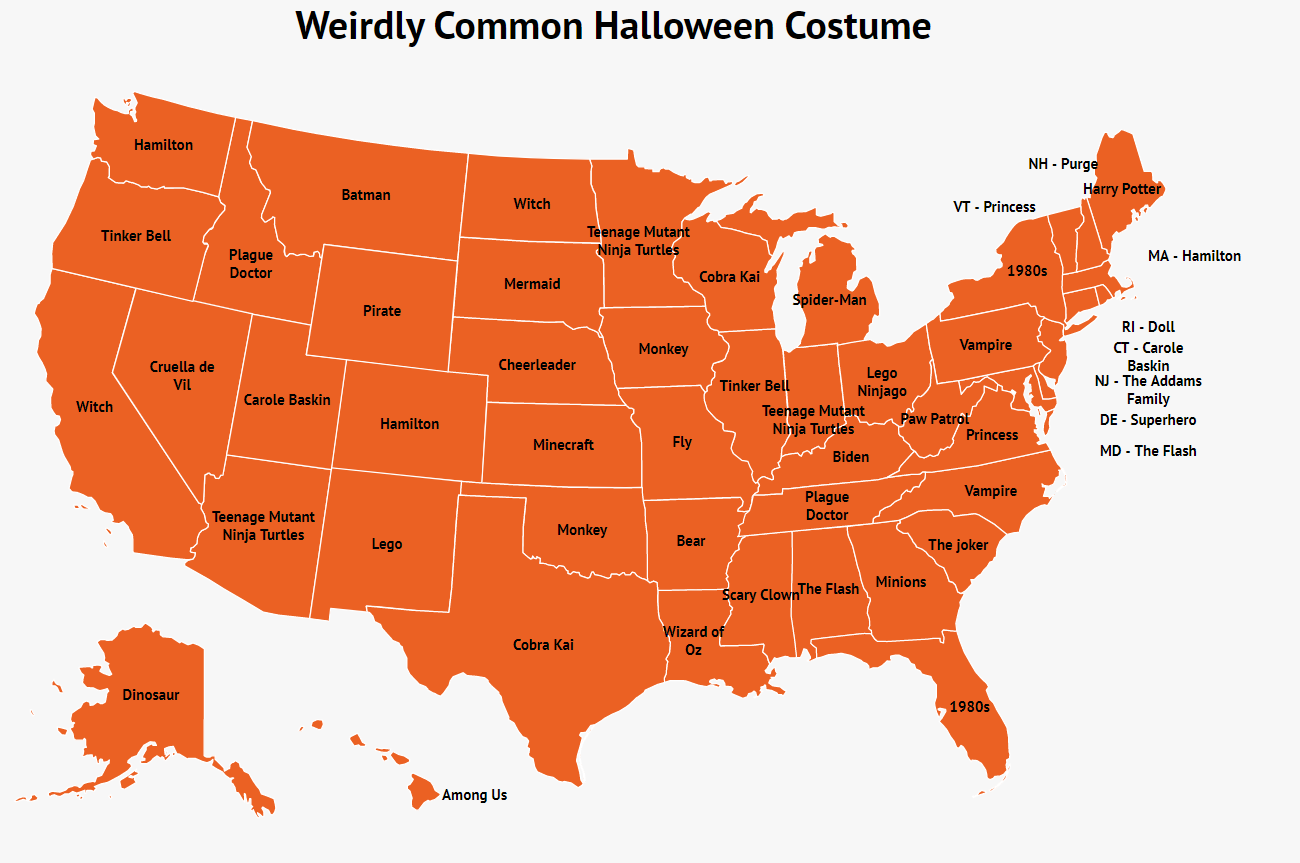 Halloween is coming up.

That means candy, costumes, and binging on scary movies. This year, it might also mean your normally cringey work Halloween party is now a cringey Zoom Halloween party.

However, there will be the renegades. Those who boldly wear what most don’t- even if it means answering, “What are you?” all night.

We hit up the data to find the most disproportionately common costume in each state. Some are normal Halloween garb, others are just… weird.

We turned to Google Trends to find what costume searches were trending. We looked at over 100 costumes, using keywords paired with “costumes.” Good chance if you’re googling “Wizard Of Oz” costume in October, you’re planning a Wizard of Oz Halloween costume.

While some are popular favorites all-around(The all-too common pirates, witches, princesses, and superheroes), we also examined more trendy costumes such as Tiger King, Cobra Kai, the trendy video game Among Us, and others. From there, we identified what costume was trending really high in each state.

This doesn’t mean, for example, that in Missouri the majority of folks will dress up as a Fly (although that sounds awesome). It just means that Fly costumes are far more popular there than most other states.

We only looked at search activity from 9/9/20 – 10/9/20. This means we missed all the last minute Halloween costume searchers. That’s okay though, we know they’re all going to Google “easy Halloween costumes” and then just say they’re a muggle all night anyways.

You’re never too old for a little Halloween fun.

Whether that’s bringing in some delicious candy to the office or wearing a fun costume for a work event, more power to you.

Halloween costumes can be a fun way to show some personality at work. Why not share your love of a video game or favorite childhood movie with your colleagues?

You might want to steer clear of any costume that makes it physically hard to do your job, anything political, or costumes too gruesome, but ultimately Halloween is all in good fun. So you should let yourself enjoy it.

Of course, if the scariest thing you can think of is a Monday morning at work, it may time to find a job that doesn’t give you nightmares.