These Are The 10 Most Stressed Out States In America 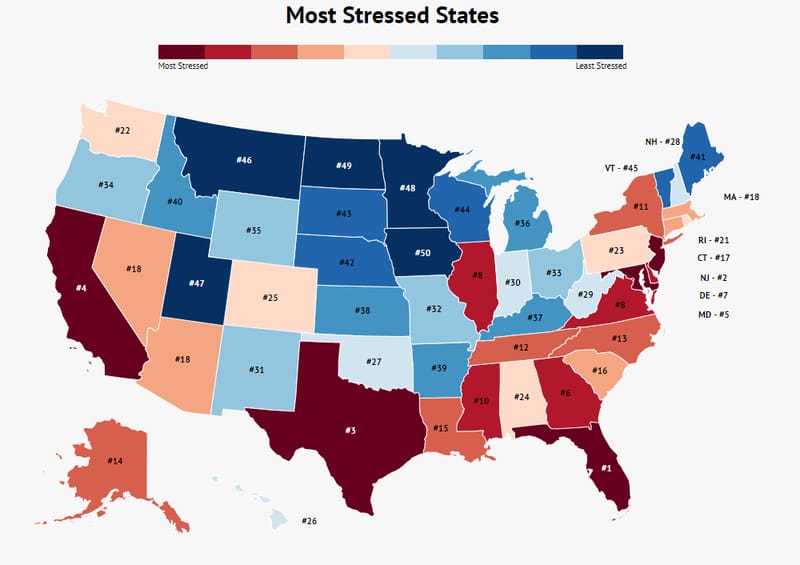 It’s past five o’clock on a Friday night and you are reading this article as a break from a mountain of work that needs to get done before Monday. You think, well, this is adulting, but at least there is good takeout!

But are most Americans pulling all-nighters after graduating college or sitting in traffic for hours a day to get to their jobs? Actually, are many Americans struggling to even find a job?

Zippia has done it again with their top 10 most stressed states in the U.S. Which states sentence you to a life of long commutes, high unemployment, ridiculous rent prices, and grueling work hours?

You probably guessed California, but did you think of Georgia or Mississippi?

Read on for a detailed look at the top 10 most stressed states. You state not on the list? Scroll to the bottom to see where it landed.

How We Determined How Stressed Out Your State Is

In order to measure how stressed out a state is, we chose a set of six criteria that reflect how anxious people are:

The higher any of these was, the more stressful the people of the state are. Our data is from the U.S. Census’ American Community Survey for 2018 (the latest data). We ranked each state from 1 to 50 (with one being the most stressed out and 50 being the least) in the six individual criteria.

First, let’s take a look at the top 10 most stressed out states. Then we’ll wrap the whole thing up with a detailed ranking of all 50 states. Florida, the place full of sunshine and oranges? You got it! The state that is known for attracting retired families? Definitely. A place to sit back, relax, and enjoy the ocean waves hours a day? Maybe not.

While many people in Florida are probably on Medicare plans because they are over 65, the rest of the population is struggling without health insurance. Florida is actually ranked fourth in uninsured in America.

If the possibility of going into massive debt after an accident because of not being insured doesn’t cause you to be stressed, what does?

New Jersey is the 2nd most stressed state in the U.S. People in New Jersey work long hours, have long commutes, and have a high home price to income ratio. If that wasn’t enough, New Jersey is the densest state, so good luck escaping other people to unwind.

If you’ve ever wondered why it is known as the garden state, perhaps beautiful gardens, fresh food, and diners are part of Jersey’s stress management program.

Texans work more hours than almost any other state. After a long, stressful day at work, Texans better drive safely on their long commute home. If Texans get in a car accident they risk more than injury, they risk some serious medical bills.

Texas is, after all, the least insured state in the country. 17% of Texans are uninsured. California is known for Silicon Valley, Trader Joe’s, and good wine. But does the Trader Joe’s epic freezer section and cheap wine make up for the stress level in California?

California ranks second in home price to income ratio in the U.S., so even if you make a lot of money, your rent will eat most of your income, leaving you searching for used iPhones on Craigslist and drinking 2 buck chucks. No wonder Californians are so stressed. Wondering why Washington, D.C. isn’t on our list? Turns out, most people don’t actually live in D.C., but rather in Maryland and Virginia, another top stressed out state on our list.

It shouldn’t be a shocker than that people in Maryland have the second-longest commutes in the country. If you have to cross state lines just to get to work on a daily basis, you likely would be stressed too. Although “Hotlanta” may be a vibrant urban center full of job opportunities, many Georgians must tackle a high unemployment rate, high uninsured rate, and a long commute.

Combine those factors with lower higher education rates and you may soon realize that life may not be as peachy in Georgia as you may think.

For a teeny state, Delawareans are big time stressed. For one, there are 494 Delawareans per square mile. That kind of crowding drives up housing costs.

This leaves a big chunk of your average Delawareans’ paycheck to paying off the mortgage (and, I assume, the rest goes to buying delicious crab cakes.) As home to one of the Navy’s fleets, Virginian’s don’t have time to sit around and smell the roses every day. They are stuck in long commutes (think Washington, D.C.) and work long hours.

Hopefully, these folks may be able to sit outside with a bag of peanuts and a glass of wine after a long and stressful week.

Right behind Virginia, we have Illinois as the 9th most stressed state. Illinoisians have a lot to be stressed about. While Illinois residents don’t work crazy hours, a lot of them don’t work at all. Illinois has one of the highest unemployment rates in the nation.

Of course, considering residents who are lucky enough to have a job have to deal with a pretty terrible commute. I’m not sure which is worse. But there is no doubt that Illinoisians have a lot to be stressed about! Last but not least comes Mississippi. Mississippi often comes up on our top 10 lists, including most dangerous commutes. So are we surprised it comes up on yet another list? Nope.

So why is Mississippi so stressed? Easy, they have the second worse unemployment in the nation. They also are ranked high for their uninsured rate and when they do have a job, Mississippi residents work long hours.

Maybe it’s time for a move? Definitely not to Florida.

So there you have it– our top 10 most stressed-out states. So you read this list and think, well, if those states are crumbling under stress, which states are not panicking 24/7?

Yes, the flyover states. Perhaps we don’t hear much or think about these states much because people aren’t complaining about how stressed they are!

So they have a lot of corn (who doesn’t like a good roasted corn) and a good work-life balance. What more could you possibly want?

The Most Stressed States, All 50 States Ranked: