The Most Sunburned States, According To Google 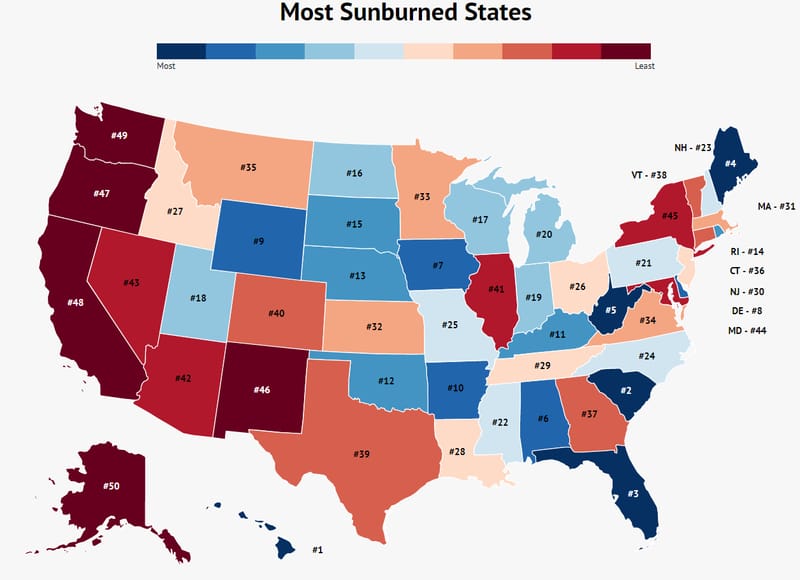 It’s getting hot in herre…

I’m gonna soak up the sun.

Seriously, though. I’m done now. Since summer has officially arrived in the U.S., people are spending more time outside. This doesn’t come without a cost. It seems that many are going outside unprotected. That’s right, they’re skimping on the sunscreen. And, in return, the sun is delivering its natural gift of sunburn.

Turns out, people in some states are more likely to receive this gift than in other states. Now, it’s time to lather up with aloe and maybe next time these states will think twice when it comes to sunscreen.

Summary of the Most (and least) Sunburned States

Don’t forget to check out the full list of sunburned states below.

How We Determined The Most Sunburned States

This one was fairly simple. We turned to google trends to find which states saw the biggest increase in search traffic for ‘sunburn.’

Odds are pretty good if you’re googling sunburn treatments you’re lobster red. Related searches include shaving cream, menthol, and a Luke Bryan song (Sunrise, sunburn, sunset.) So there is a slight chance some country loving states may rank a bit higher. But if you’re blasting music on the 4th, there’s a good chance you’re doing it outside.

We opted to look at July 1st to July 6th, accounting for a long weekend and time off.

The 10 Most Sunburned States

With more and more people heading outside, the chances of sunburn have been increasing drastically. In the last couple of weeks, the search volume for “sunburn” has skyrocketed. And what happens when you look like a lobster? You run to the store for aloe.

So really all this boils down to is that companies that sell aloe are probably sitting pretty in the sales department. Of course, after one really bad sunburn usually, people are smart enough to remember sunscreen for the next time. So maybe the sunscreen companies aren’t doing so bad either.

While it all seems like a ploy, or a marketing scheme between the sun and these companies, it’s probably smart to just go along with it. After all, you don’t want to end up with skin cancer. As with other things in life, it’s important to use protection. And in this particular case, that means sunscreen.