The States That Want To Move To Canada The Most 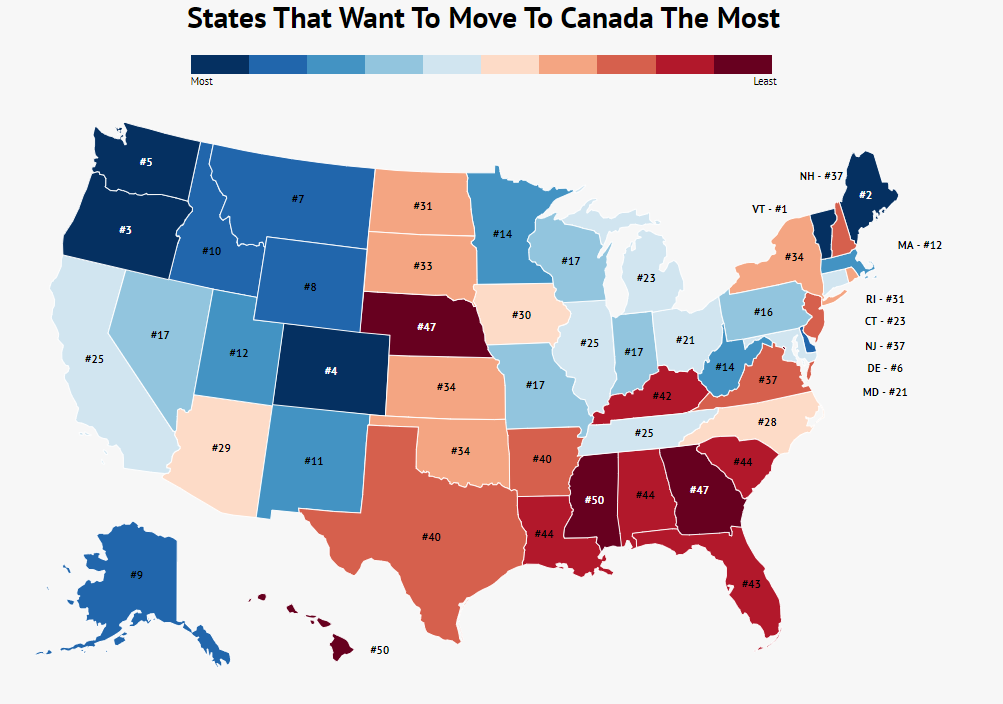 It’s no secret that our Canadian nice neighbor to the north is a pretty nice place to live.

In fact, whenever America goes through a bit of turbulence, searches for “moving to canada” sky rockets. The US election was no exception. Election day, and the days surrounding it, saw a surge of American workers looking to learn more “aboot” Canada.

We analyzed Google Trends’ data to see where in the country people were most interested in moving to the Great White North.

We once again turned to Google Trends to find which states were googling “moving to canada” the most.

The keyword overall saw a sharp increase in traffic this week. While we can’t guarantee everyone looking how to move to Canada will follow through, they’re at least thinking about it. We opted to look at the past 7 days- capturing the days leading up to Election day, Election day itself, and the day following.

States That Want To Move To Canada The Most

Canada isn’t the only country US workers are considering relocating to. Although it is by far the most popular, judging from Google searches. Below we highlight some countries certain states are a bit more keen to move to than other states.

Hold your hockey stick, moving to Canada isn’t that easy

While searches for moving to Canada are up, odds are most people won’t fully through.

Immigrating to Canada- and most countries- requires a lot of paperwork and often means navigating a foreign job market from abroad to land a visa. The process of relocating will cost you a lot of time and loonies (the Canadian currency, not sanity.)

Despite all the challenges, all the stress has people in America checking out the process to see if they should move to snowier pastures.