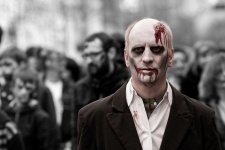 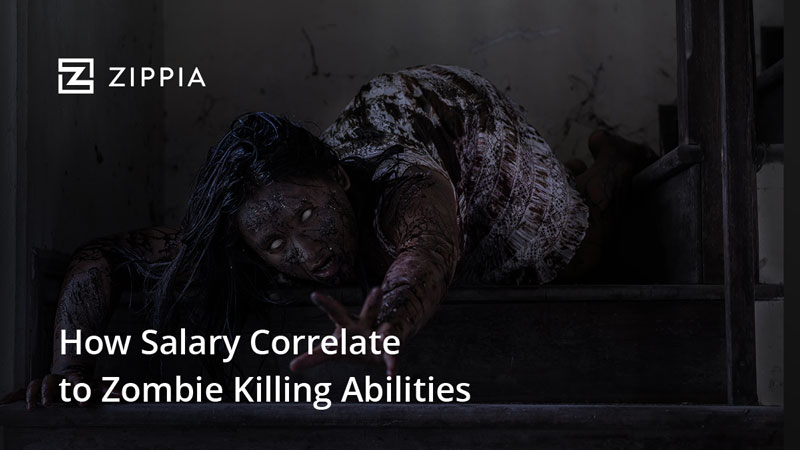 Empathizing with characters who were once just like us is what makes The Walking Dead so relatable, and it makes you wonder what they were like before the apocalypse, and how that prepared them for the world they’re in now.

One of the ways the show makes us love the characters so much – and hate the writers for killing them – is that they’re so developed. They’ve all got struggles, trials, and histories. So we were wondering, how did their success before the rise of the walking dead match up to their post-fall skills?

After all, some of them are able to draw on their pre-apocalypse abilities from those backstories in invaluable ways. Here we estimate characters’ salaries, exploring the financial successes of some of the most popular characters and how they correlate to lethality.

“I approach him… like he used to be a used-car salesman. That’s what I know, and there’s not a lot beyond that… He’s a car salesman who has survived as long as Rick and his gang, so what has he done to get there?”

So this is one of those times where the comics and show are at odds. The first four pages of Here’s Negan cast him as a high school gym teacher humiliating some kids as he’s coaching them… in ping pong.

While his knowledge of sports trivia and his stereotypical jerk gym teacher persona fit – and his fondness for sports equipment – we’re going to have to stick with the show on this one.

But imagine how well this translates to the new world: Imagine that one day civilization collapses, and all the grocery stores close.

You suddenly realize that if you want something to eat, you’re going to have to go out and hunt it down and kill it. Otherwise you’ll starve. That is what commissioned sales is like.

There’s no real indicator of where Negan is from, so we’re looking averaging typical sales salaries to come up with $23,627 – that might explain some of his bitterness, given his age.

But love him or hate him, Negan definitely seems capable and willing to do what it takes to finish things – to close the deal, shall we say.

Given his age and managerial skills, we can safely assume that he’s a sales manager by now, so we averaged salaries from three areas, and came up with $63,734 a year.

But as far as his kill count is concerned, considering that he’s only been around for one of the seven seasons, nearly doubling Rick’s score is pretty impressive.

Glenn: Nice moves there, Clint Eastwood. You the new sheriff come riding in to clean up the town?
Rick Grimes: It wasn’t my intention.
Glenn: Yeah, whatever. Yeehaw. You’re still a dumbass.

We can’t be certain where Rick would be from in real life, since King County is fictional. But, we can use some context clues to figure out more or less where it should be.

After the group makes its way to the Greene Farm, we see them group travel to a high school with Linden County Sheriff’s cars out front. So, the farm isn’t more than a county or two away.

We know Rick travels along I-85 to get to Atlanta. We also know that Shane and Andrea visit Senoia, GA – which is a real town about a half hour drive south of Atlanta.

Combined with the knowledge that Woodbury is a real town about an hour south of Atlanta and Rick is able to drive from the prison to his home without any notable change in sunlight, it can’t be far.

Ok, so there are two towns that generally fit that criteria: Fairburn and Palmetto, both in Fulton County.

Deputy Sheriffs in Fulton County earn an average salary of $45,827 – judging from his age, it’s safe to assume that he’s around that and potentially higher.

Considering that the national average is $43,348 and the state average is $38,674, that’s not too bad. And it seems like a nice town to raise a family, until…

“The other writers and I decided on her being a firefighter.”

Tyreese and Sasha’s group tells the main posse that they’re making their way up from Jacksonville when they first meet, and the actress who plays Sasha tells us she was a firefighter.

So, let’s break it down.

The starting pay for firefighters in Jacksonville is $2,782 a month – that’s not including bonus and benefit information and other factors that impact base pay.

Sonequa Martin-Green, the actress who plays Sasha, was 28-years-old when she first appeared in the show – so assuming she started when she turned 18, that means she has ten years in service.

Assuming she behaved herself and got all of the regular raises, in 2012 she would have a base monthly pay of $4,033. I feel like it’s safe to say that she got a promotion to engineer, which adds 15 percent to her salary to make it $4,637.95 a month.

Add $25 for each of her five-year service bonuses. And since she’s a real go-getter, let’s say she got 30 hours of community college ($100 a month) to get her EMT certification (another $100 a month).

According to The Walking Dead Survival Guide: Michonne

We’re sticking to the television series here, but it’s helpful to look into the comics for insight. She out and out says she’s an attorney in the graphic novels, and certain aspects of the show support this as well.

When Deanna interviews Michonne, she was immediately drawn to a book about the law and held it to her almost like protection. She also takes a position as co-constable which – combined with her capacity for asskickery – is in keeping with her appreciation of justice and ethics.

Also, Michonne is very persuasive when it comes to swaying the survivors. Note how she got out of the situation with Merle essentially by picking apart his arguments about why he had to turn her in.

So the question is then what type of law she practiced.

The comic canon indicates she was a public defender. This goes with the law and order vibe, but the average salary for an assistant public defender in Atlanta is $60,526.

The thing is, she alludes to a love of art multiple times. And while this doesn’t necessarily demand a huge salary, we see her living in a high rise during her flashback sequence. Those aren’t cheap in Atlanta, so I’m leaving towards a higher paying field of law.

I’m going to go out on a limb here and say that this supports her being a copyright lawyer – the average salary in Atlanta is $136,790.

Got to pay those bills if you want to enjoy the champagne and canapés in art galleries.

“We don’t stop. We don’t go back. We’re at war and retreat means we lose. The road fights back, the plan gets jacked. You all know that. Now, we will get through this because we have to. Every direction is a question. We don’t go back!”

It doesn’t take much digging to figure out that Abraham was a sergeant in the Army.

His weapons proficiency suggests that he served in a combat specialty – and that type of creative vulgarity takes either a lot of research or military experience to master.

Also, he tells a story about his unit being stranded and having to wait on a camel to poop out the keys it ate before they could move on – you can’t make that up.

The question of what his rate of pay was is a bit trickier.

So first, what rank was he?

As much as I love the guy, I just don’t think he has the makeup of a higher-ranking non-commissioned officer. Most NCOs retire at the rank of E-7 – which is sergeant first class ­– so this isn’t knocking him.

But ­– We know the actor was 50 years old when he first appeared on the show.

So using that as a benchmark, Abraham had probably retired.

You have to get at least 20 years in before you can get your pension, so we can safely assume Abraham served at least that long. Let’s just say he loved the life and retired at the age of 40 ­– with 22 years on active duty.

A person who entered active duty after 1980 gets half of the average of 36 months of their base pay, plus 2.5 percent for each year over the 20-year minimum.

In the show they make it clear that she attended college – we don’t know if she dropped out or was still enrolled by the time the outbreak began.

It’s pretty much the same story in the comics. She went to college for one semester where she flunked her courses and had to be pulled out because of her father running out of money.

The median salary for a farmhand is $10.78 an hour, which is $22,422.40 a year. She was providing labor on the family farm, so we could try to factor in her room and board ­– but we’re not messing with benefits in this story.

Also, it was a family business.

So… Maggie Greene likely had an income of $0..

“I was just drifting around with Merle, doing whatever he said we were gonna be doing that day. I was nobody. Nothing. Some redneck asshole, and an even bigger asshole for a brother.”

So in a sense, Daryl was in a family business as well.

Beth makes some guesses about Daryl’s profession guesses over the course of one episode — prison guard, motorcycle mechanic — but after a bit of the ol’ korn likker Daryl gets a little touchy about the resume subject.

As it turns out, inquiring about his job was a bit of a sore spot for him since he didn’t have one.

That said, we can gauge what it would have been like.

He’s definitely got a hand with a wrench – he’s the de facto mechanic of the group, and he makes that motorcycle work again every other episode. The median wage for a motorcycle mechanic is $15 an hour.

But probably picked up the skills from cruising with Merle’s motorcycle gang – so we can safely guess he didn’t have any certifications. That would put him in the bottom part of the salary range, at $10 an hour for the bottom 10 percent.

He implies that he was tagging along with Merle for the most part, whose business was predominantly running drugs via his gang.

If he was also a part-time drug dealer like this guy, then he was making about $14,400 a year if he sold a little grass on the side.

So if he worked part-time as a motorcycle mechanic and pushed weed, he’d make about $24,800 a year.