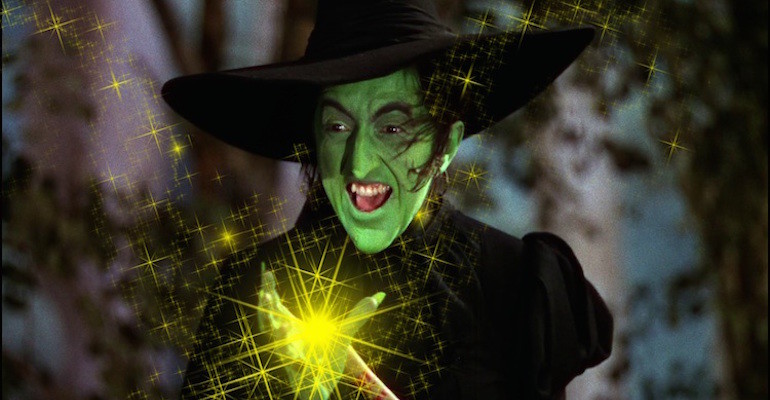 Witches, Wizards And Warlocks In The Workplace

I just can’t seem to get into the whole Halloween thing.

Perhaps all those years of door-to-door sales during university put me off walking up to strange houses just to beg for candy. After all, I’d met plenty of goblins and ghouls behind many doors as I tried to flog (sorry … ‘sell’) discounted movie passes and timeshare holiday offers to unsuspecting Sydney residents.

But the American tradition has clearly made its way across the Pacific with Aussie families getting right into the spirit of it.

Halloween is still a week away and yet at least four houses in my street already have giant cobwebs draped across their balconies; two of them have skeletons hanging on their front fences; and you’ll love this … the people directly across the road have installed a special Halloween doorbell that emits a bellowing evil muahahahaha sound whenever someone visits the house!
Trick or treat anyone?!?

It’s one night of the year! The pumpkins; the masks; the costumes … that doorbell!

But what about all those witches, wizards, and warlocks that arrive at your workplace every single day with their incantations and potions? Don’t you sometimes wish you could just cast your own spell and make them all disappear?

Too bad you can’t just send them on their merry way with a bag of candy … or laxative infused cookies – something a very bitter high school English teacher of mine confessed to doing one Halloween. “Gentlemen”, he said. “It’s the only way to make them run … and never come back”!

Despite having never actually worked at Hogwarts, believe me I’ve still worked alongside my fair share of sorcerers and sorceresses. Sometimes I just didn’t realise it … until they’d cast their spell!

“Abracadabra Alacazam … make those files disappear as fast as you can!”

This is going back a long time … to an era when most recruiters were typically surrounded by 2 piles of files – for clients and candidates. And we all had our own way of colour coding our best candidates and our most active clients.

Devin had recently joined the team and was very keen to get some runs on the board.

Every couple of weeks, someone in the team would complain about some of their files disappearing. But there were so many files in the office that nobody really noticed.

Then it became quite a regular occurrence.

I was in the office one Saturday afternoon (we’re talking about an era before laptops, home internet connections, and cloud based databases). I was sorting out some stuff in the filing room (who even has a filing room anymore?) when I heard a noise in the main office area.

I peeked out to see Devin snooping around a few of the desks.

Let’s just say a few more files were about to disappear!

Building security CCTV revealed Devin coming in almost every weekend and walking out with a few files.

Gretta was a bit of a strange character. Sometimes she’d be delightful to work with; but at other times she became what many of her colleagues would call ‘the pesticide farmer’! She liked to plant ‘toxic seeds’ in different teams or during meetings, and then just sit back (or walk away) and let the sh*t storm grow.

One year for a Kris Kringle someone anonymously bought her a giant wooden spoon and the card read “Fillet of a fenny snake, in the cauldron boil and bake, eye of newt, and toe of frog, wool of bat, and tongue of dog” … yes another reference to one of Macbeth’s witches.

Confession: Gretta – if you’re reading this … Your 1995 Kris Kringle was from me!

“Maybe she did come back to work, but was wearing an Invisibility Cloak!”

I know I’ve shared this story before, but I once had a new person start in my team who went out for lunch on her first day and never came back!

I happened to see her a few months later in the street – so I knew nothing untoward had happened to her. She hadn’t completely disappeared!

But I did have a few Harry Potter fans in my team at the time, and I remember one of them suggesting that she may have come back from lunch wearing an Invisibility Cloak!

Each to his own!

Some might call it Truth Serum. I just call it alcohol!

I love office Christmas parties – usually because I get to remember everything!

At a Christmas party many years ago Benny (not Ben; not Benjamin; just Benny) had a lot to drink.

Maybe he forgot I was his manager, or perhaps it’s more likely that he didn’t realise who he was sitting next to since he was too paralytic. But half way through the night he leaned over and whispered “I’m actually resigning as soon as I get my bonus. I’m out of here!”.

I didn’t react. I said nothing. I think I just poured him a glass of water and smiled awkwardly.

On the Monday morning I took Benny into a meeting room and asked him if there was anything he wanted to share with me.

He literally couldn’t remember a thing.

I told him what he’d said to me and he went white.

Do you believe in voodoo magic?

Confession #2: There’s a 6-week period in my career that has never appeared (and will never appear) on my résumé.

I’d accepted a job with an organisation because I had been lured by the company name but my manager was an absolutely horrible man.

He treated people like dirt, belittling everyone publicly at every possible opportunity. I was too naïve to even know about workplace bullying at the time, but looking back now, this was a classic case.

He’d been so horrible to a few of us, that one day Derek (one of the guys in my team) asked those of us in the lunch room if we would be up for a bit of voodoo magic!

Voodoo magic? All I could think of was that James Bond movie (I think it’s Live and Let Die) but I kept listening.

Derek showed us a ‘doll’ that he’d made that supposedly represented our manager. He then put the doll face down on the lunch and stuck 4 pins (quite aggressively) into the doll’s back.

The next morning we were told that our manager had done his back in and would be off for a week!

I resigned the day he returned to work.