The Worst States For Baby Boomers 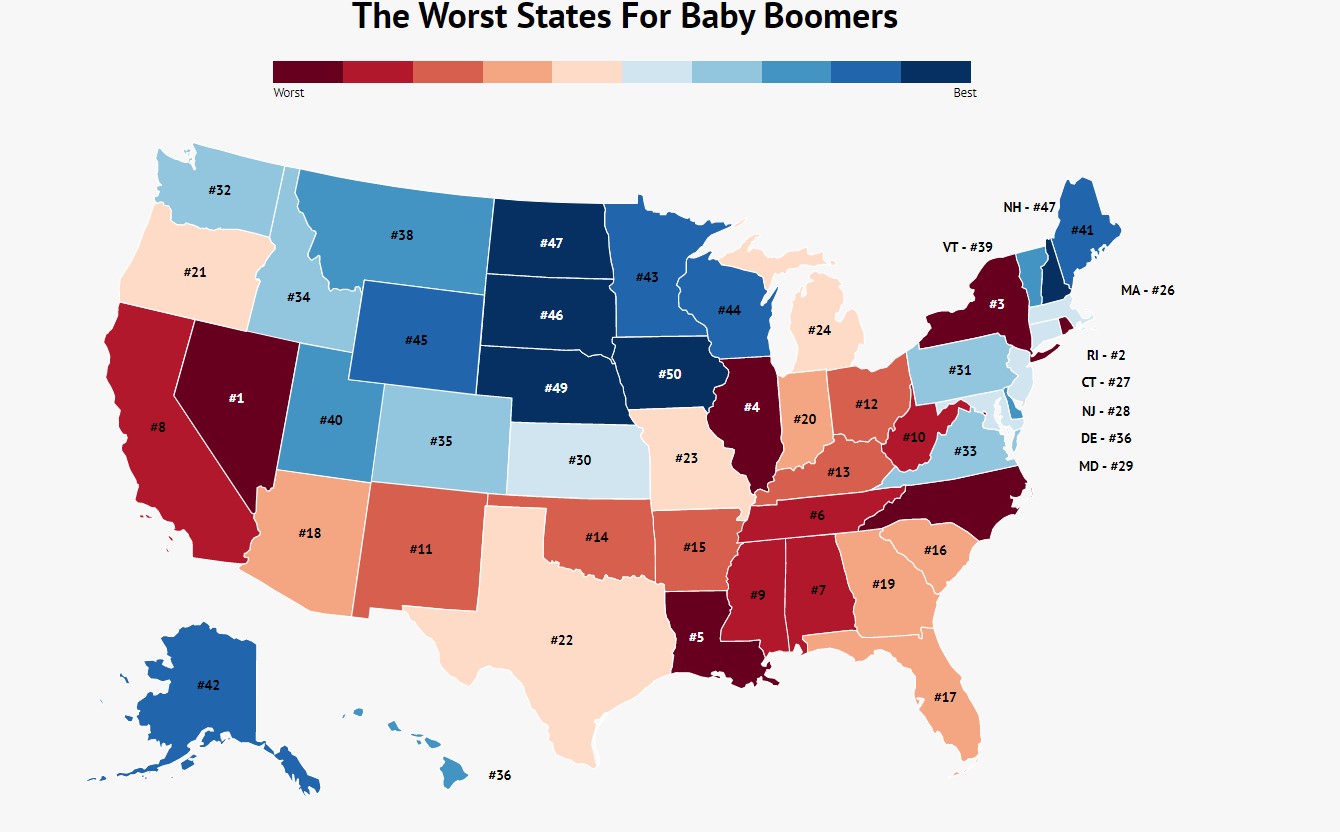 Ok boomer is trending, but a lot of baby boomers aren’t doing okay at all.

We hear a lot about how millennials are struggling, but baby boomers don’t exactly have it on easy street. In fact, a lot of baby boomers might feel like they are walking uphill both ways in the snow. Sure, they spend less on avocado toast, but they are getting old and aging can be pricey. Many baby boomers are reaching or are now passed retirement age.

Yet, a large percentage of those 55-75, have a precarious financial standing. However, the struggling for baby boomers is not evenly spread, where you live matters. We analyzed all 50 states to uncover where it is hardest to be a baby boomer.

Below we detail the criteria we used to rank the states and have the full ranked list. But first, let’s see the 10 states where baby boomers have it the absolute roughest.

Here are the 10 worst states to be a baby boomer

Baby boomers looking to retire may be tempted to relocate south for cheap costs of living and favorable weather, but should carefully consider what relocation looks like. 5 of the worst states to be a baby boomer are in the south. High cost of living contributes to several states on the top 10. However, others suffer from a general lack of wellness.

Keep reading to see why these states have the least to offer baby boomers and to see the full list.

How We Determined The Worst States For Baby Boomers

Each state was ranked 1 to 50 in five categories:

All five categories were then averaged together, each weighted equally. The higher score in each category, the lower the rank. For example, Rhode Island baby boomers have a 4.3% unemployment rate, the second highest of any state, earning them a #2 rank for unemployment.

At all points, our goal was to include as many baby boomers as possible, while excluding brackets that would include a majority of non baby boomers.

To gather wellness by state, we used the most recent Gallup Health And Well-Being Report. This comprehensive survey examines essential career, social, financial, community, and physical components of well-being. As baby boomers age, these metrics will only be more important.

If your state isn’t among the top 10, jump down to the bottom of the post to see where it lands on the full list. Otherwise, learn more about why these states are the absolute worst place to be a baby boomer.

Nevada is the worst place to be a baby boomer. Many baby boomers might not want to work and instead be eager for retirement. But in Nevada those who lose their job will having a harder time finding work than almost anywhere else in the country. In addition to lousy retirement savings and a high poverty rate, most Nevadan baby boomers are still saddled with a mortgage.

New York, New York, what a wonderful place! …unless you’re a baby boomer. New York’s place on the list was secured by it’s lousy well-being rate. New Yorkers are less satisfied with their careers and surroundings than almost any other state.

Illinois baby boomers might have more padded retirement accounts than New Yorkers and a slightly decreased chance of being in poverty, but it is still a pretty bad location for baby boomers.

The bayou state is the fifth worst place to be a baby boomer. Louisianians may have drive-thru daiquiris but they have a significantly higher poverty rate for baby boomers than most other states. Maybe that poverty rate contributes to the state’s less than stellar well-being.

The only Ten-I-see-here is 10% poverty rate. That’s right- 1-in-10 Tennessee baby boomers live in poverty. Judging from the low state well being rate, the other 90% aren’t doing so hot either.

Alabama is the third southern state to make the list. Comparatively low mortgage rates and unemployment, couldn’t make up for high poverty and a general lack of well being among Alabamians.

While Californians are generally pretty happy to be in California, some glaring data points earned California its spot as the 8th worst state for baby boomers. Most Californian baby boomers are still paying a monthly mortgage, which considering the location could be a pretty steep portion of their monthly income.

At #9, we have Alabama’s neighbor Mississippi. Mississippi has a pretty similar story- low mortgage rates and unemployment, just couldn’t make up for high poverty and floundering well-being.

At 10, we have West Virginia. While West Virginians baby boomers fare better than residents of the previous 9, it is still far from easy street. We have a similar story to the other southern states on the list, high poverty rate and a general lack of well being.

Summary On The Worst States To Be A Baby Boomer

There you have it, the 10 states where baby boomers are struggling. Southern states made up a majority of the list, with high poverty rate and low well-being sealing their fate. Other pricey states (California, New York) were too steep for baby boomers. Interestingly, while there are some differences, there was quite a bit of overlap between this list and the worst states to be a millennial. Maybe baby boomers and millennials have more in common than they thought.

Check out the list below to find your state and see the best states to be a baby boomer.