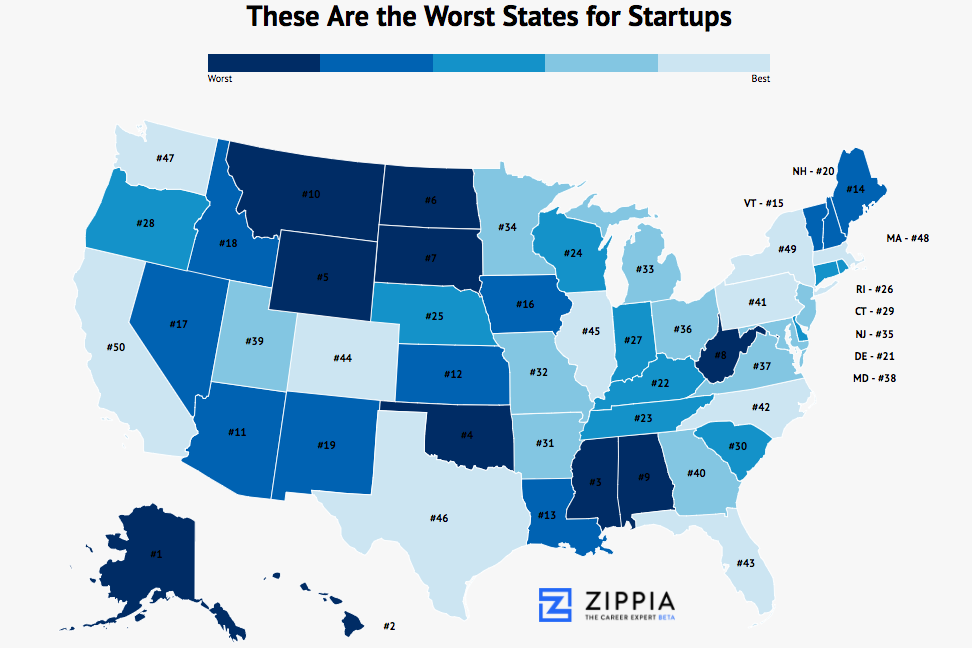 by David Luther
Rankings - 2 years ago 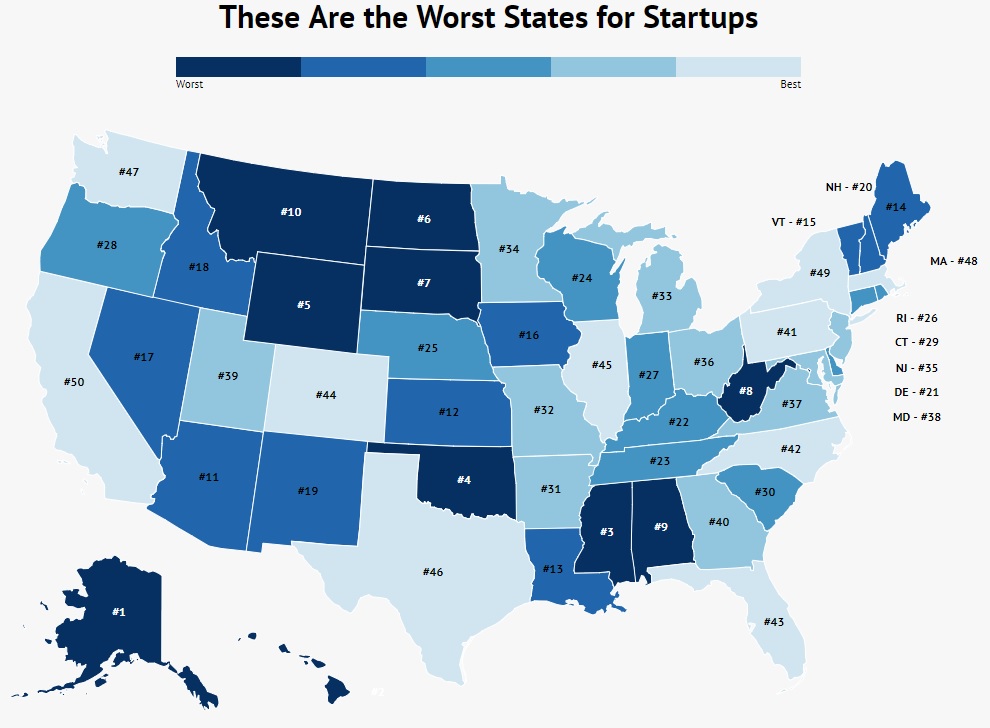 When you hear “startup” your mind immediately goes to Silicon Valley, or maybe the HBO show about a startup in Silicon Valley: Silicon Valley. And there’s a ready explanation for this, that the vast majority of funded startups (40 percent) are in the Bay Area, quickly followed by NYC and Boston (about 25 percent).

But if you’re interested in getting your super awesome idea for a cat-walking gig economy app and want to steer clear of the Valley, the alley, and Kendall Square; where do you go? Probably nowhere — since it’s a terrible idea — but if you won’t listen to that advice then at least try to avoid the ten worst states for startups:

We have a complete list showing how all fifty states stack up at the bottom of the page, but first, here’s a rundown on what qualities the best states have — and consequently what the dubious top ten on our list lack.

What we used to determine the worst places for startups

Even if you’ve identified a niche, product, service, market, and all of that other jazz, probably the most important thing for your startup’s success (beyond a competent and knowledgeable team) is access to funding.

VCs are near startups and startups near VCs, meaning that the more VC action happening, the more likely you are to find successful startups. So, we used PwC MoneyTree data for the first three fiscal quarters of 2017 to compare the volume and value of VC deals in each state. Specifically, we looked at:

We ranked each state by those criteria based on the available data for each fiscal quarter of 2017. Then, we added up their scores and ranked them accordingly.

Why these states are so terrible for startups

The average Seed and Series A stage companies take about 10 percent longer to raise funds outside of California, New York, and Massachusetts, which equates to spending an additional month chasing Series A capital and two more months hunting for Series B capital — that’s critical time in the lifecycle of a startup.

And startups tend to acquire other nearby startups. Crunchbase showed 335 acquisitions in California since 2006, and 225 of them were of other companies based in California. Even If you assume acquisitions were to be distributed across states weighted by their startup population, that number is about 39% higher than you would expect.

But this only explains why about two thirds of startups are in the top three states, but not why almost none are in the bottom ten, or why they’re so damn bad for startups.

Sadly, the worst states for startups suffer primarily because there is simply no money or educational capital available in these states, which have largely weak economies and few universities. The main three reasons startups struggle in these state are:

So if you want that cat-walking app to really get its legs under it, you should trying walking it around the Bay Area.

The worst states to found a startup