The Drunkest States On Election Night, According To Google 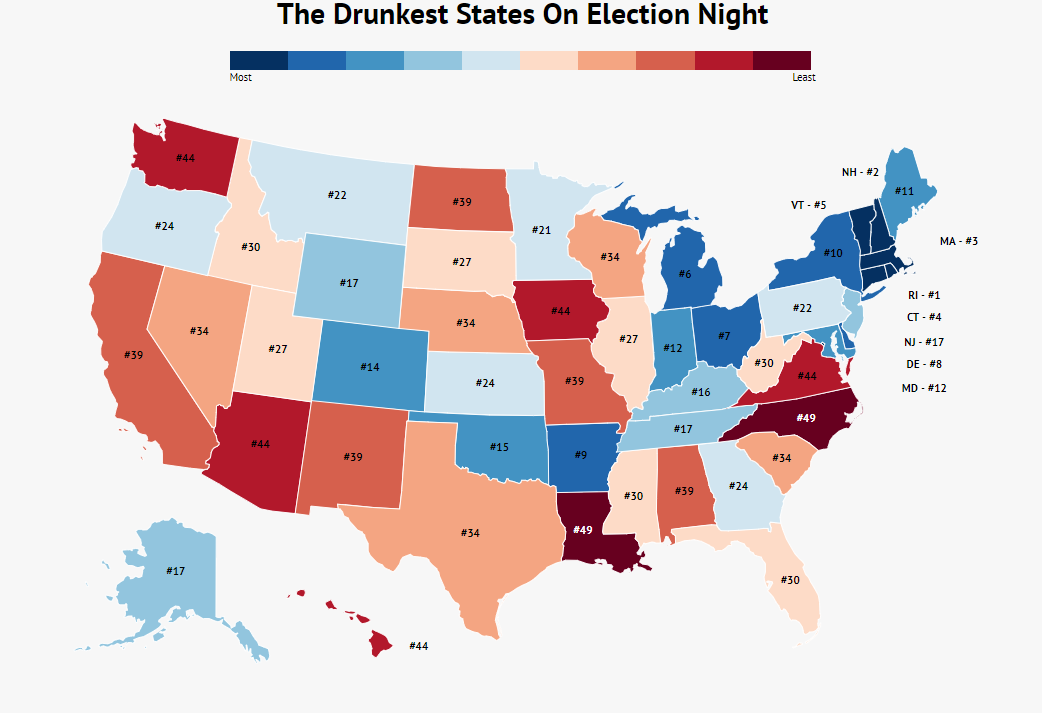 Usually holidays have Americans tossing one back.

Christmas, Thanksgiving, and the Fourth are all big drinking days. However, so too are other pressing events.

Just like you personally might celebrate a work triumph with a beer (or nurse your sorrows with a cocktail), many Americans react to national events with booze to celebrate- or commiserate.

We analyzed Google Trends data to find out what states reached for the liquor on Election Night.

The results? The Northeast might be nursing a hangover today.

The Drunkest States On Election Night

Keep scrolling to see a full ranked list of the states that might be googling “hangover cures” today.

Overall, this only measures interest and intent in drinking liquor. So, there is a possibility the other states were drowning their sorrows more slowly with beer, or prepared in advanced for their drunken Tuesday.

It’s a shame Election Day Is a Tuesday

Judging by the sharp increase in people googling for liquor stores near them, a lot of people were indulging in a lot more alcohol than your average Tuesday.

If they work 9-to-5, that makes for a rough workday Wednesday!

Overall, this data doesn’t tell us whether the drinkers were celebrating, mourning, or somewhere in the middle. We don’t know whether they were rooting for Trump or Biden (We’ll leave that to the political pundits.)

Similarly, we don’t know if they were alone or having an Election Night Watch Party. All we know is people sure were drinking a lot- and in some states they were drinking quite a bit more than others.

The Drunkest States On Election Night, From Drunkest To Most Sober