The Smartest City In Each State 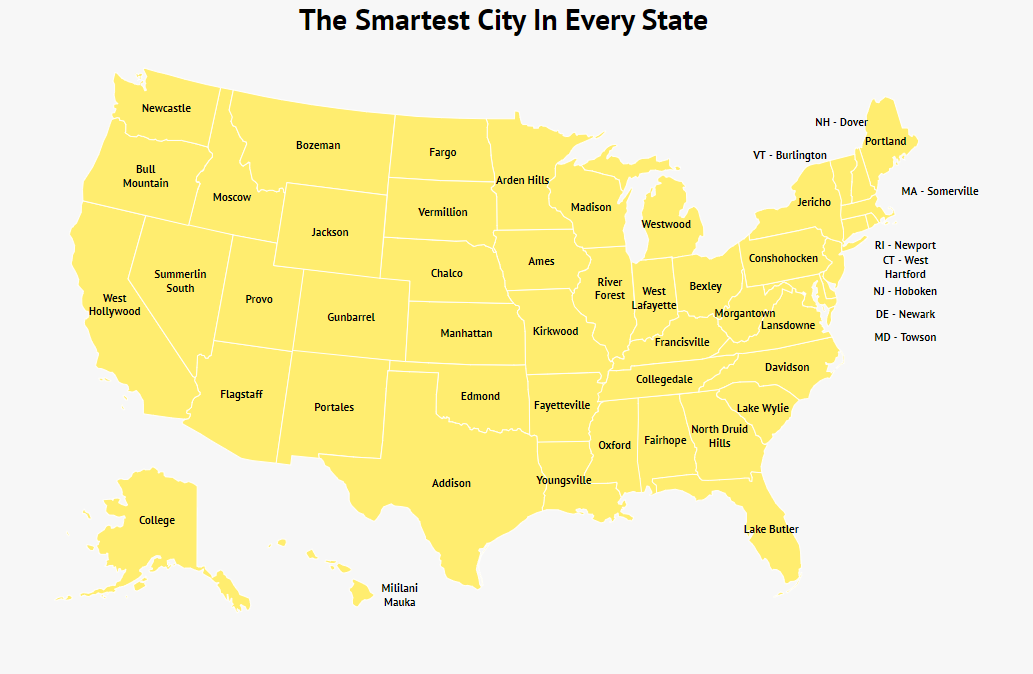 One of the many qualities that people look for in a potential location or company is the intelligence of those around them.

So finding a city with an intelligent population makes sense for both companies and employees. That’s where Zippia comes in; to help you identify those places in America that might have skipped a grade…or two.

We set out to find where people are well-educated, at all levels. We then crunched the numbers and found the smartest city in each state.

You can see our full breakdown at the bottom, but first, here are the 10 smartest cities in the US.

Keep reading to see how we determined these 10 cities are smart cookies- or scroll down to see what makes them shine just a little brighter.

How we determined the smartest city in each state

There are lots of ways to look at intelligence, such as IQ scores and SATs. However, we opted to look at something a bit more concrete and readily available- educational achievement.

Each city was equally ranked on:

Our data comes directly from the latest American Community Survey from the Census, where we examined all cities with a working population of at least 5,000.

We thought this criteria was representative of the current state of smarts with the potential for a place to improve the education levels of the next generation. From there, we identified the smartest city in each state.

No state in your city make the top 10? Jump down to the bottom of the post to see a detailed chart. Otherwise, learn more about what makes these cities the sharpest tool in the shed. Those looking for smarts need look no further than New Jersey- Hoboken, New Jersey that is. Finding a high school drop out in Hoboken is like finding a needle in a haystack, only .4% of young adult residents are lacking that achievement. No doubt, a large chunk of those residents go on to higher education, since Hoboken has the highest rate of college-educated residents in the nation- a staggering 51%. Hollywood may be wear you go to get famous, but West Hollywood is where you go for the brainiacs. West Hollywood residents are hitting the books hard- with 44% having a bachelor’s degree and 99.4% having achieved at least a high school diploma. The smartest city in Colorado? It’s not a smoking gun, it’s Gunbarrel, Colorado. People who relocate to Gun Barrel will be treated to a city full of highly educated young adults, and the great schools that produce them. The fourth smartest city is Conshohocken, Pennsylvania. Conshohocken is one of the smaller cities to make the list, but it still has plenty to offer when it comes to smarts. This Philadelphia suburb can boast of 39% of its residents over 25 having a bachelors degree. That’s nice.

In 5th place (and #1 in all of North Carolina!) is Davidson. 40% of adults have at least a bachelors degree, and 98% of the adults under 25 are well on their way and have already achieved a high school diploma. If that’s not enough to tempt new residents into calling Davidson home, the charming Main Street, lush green spaces, and adorable local businesses should do it. Where do the smarted people in Ohio call home? Bexley. Only 1.5% of Belxey’s youngest adults are lacking a high school diploma or the equivalent. Combine that with the fact that 38% of adults over 25 possess a college degree and it’s easy to see Bexley knows how to crack open a book. The smartest city in Minnesota (and 7th smartest in the nation) is Arden Hills. The campus of University of Northwestern – St. Paul straddles the border of Arden Hills, no doubt contributing to the high education rate of the community. Toss in superb local schools, and it’s easy to see Arden Hills is a community where education flourishes.

In 8th place for smarts is Jericho, New York, shining just a bit brighter than other places in New York. Jericho residents know what it’s like to hit the books- with 98% having at least their high school diploma. Bachelors Degree: 34
High School Diploma: 100
Alabama is often the brunt of jokes, but Fairhope, Alabama proves there are a lot of smart people in Alabama. Your chances of finding someone 18-to-25 without a high school degree is basically zero. The education doesn’t stop there. 34% of adults over 25 have at least a bachelors degree. That’s pretty smart. The 10th smartest place is North Druid Hills, Georgia. 96.4% of young adults have earned a high school diploma. A good chunk of those will no doubt follow the high percentage of older adults in pursuing a college degree.

Smart Is As Smart Does

Education is important and can lend you a hand up in landing the career of your dreams. Folks in the above 10 cities are surrounded by highly educated people and often the strong school systems that help develop them. These cities, no doubt, also have an advantage in attracting new companies and future talented workers.

However, people whose cities that didn’t make the top 10 (or the top spot in their state) shouldn’t feel bad. Lots of smart people live in other cities, and for those cities who are lagging it’s never too late to hit the books.

Smartest City In Every State