The Most Eco-Friendly Workers by State 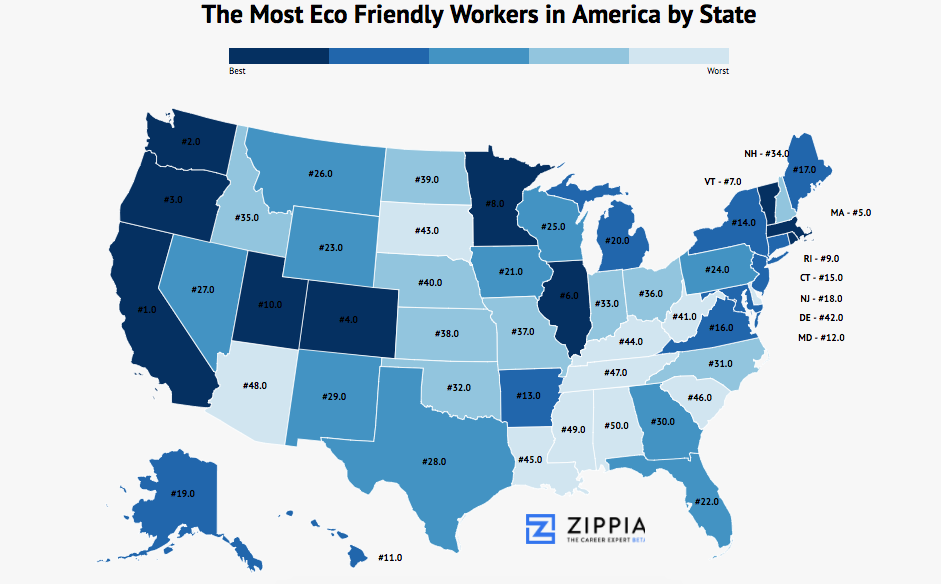 Remember when we thought that computers would make offices paperless? There was a point during the computer age’s infancy when people thought that email might make that dream come true, but as it turns out, “paper people” who unnecessarily print out emails and whatnot are going to confound those efforts.

Disappointingly, the introduction of email to offices boosts paper output at a typical company by 40 percent — and it’s the workplace and the commute to get there that make of the bulk of the average person’s carbon footprint, and some states have more environmentally friendly workers than others.

With about half of suburban areas’ CO2 emissions coming from transportation, we took a look at what different states are doing to reduce their impact on the environment and ranked them.

Some of the results are surprising, some of them not so much — did your state make the top ten? Read on to find out, but here’s a quick list of the top ten states with the most eco-friendly workers:

While the average American consumes the equivalent of almost six 40-foot trees a year, whatever draconian measures your boss might put on toilet paper rations won’t curb your impact on the environment nearly as much as they might claim.

State laws, commuting patterns, and other environmental factors bear more weight, so we made an index based off of a variety of factors:

The ten states with the most eco-friendly workers in America

Hawaii dominates this field with 189 out of 200 points, beating the next closest competitor by a relatively large margin of 17 points — but I mean: it’s not like you have to alternately transport anything too far, given its limited footpath. The real stunner here was second place: Alaska.

Alaska, who was in the top five for biking, walking, and carpooling; beat the third place by five points. I mean, how could it possibly be the most walkable of all states? Don’t they have snow, short days, bears, and rabid moose to contend with?

Well, maybe a couple of things: it has the lowest vehicle-miles traveled of any state in the country, as well as the third most alcohol consumed per capita and third highest DUI rate in the country. So you know, maybe they just don’t have licenses.

The Southwest didn’t fair too well in the green forms of transportation — but with the combined heat and sprawling community areas, that’s not really a surprise.

The South, with all of its muddin’ trucks and whatnot, fared poorly in general, with none of the states breaking out of the bottom half. Then again, have you experienced a summer on the Gulf Coast? It’s so humid, you’re swimming to your car more than walking — and with the sweat stains, it’ll look like you actually were in the water.

We gave three points for each law — but then we noticed that states that have little or no state income tax have a natural disadvantage in this ranking, as there’s really no way for them to reward green vehicle owners. To combat this, we set a floor for each category in the overall rankings, but even then the trend noticed earlier seemed to continue.

This is, we suspect, not coincidental, as the states that place less value on environmental conservation also tend to be the more politically conservative — which is of course loosely correlated to tax rates.

So yeah, red states don’t have as many laws encouraging salutary environmental practices because they want to protect their freedoms to keep more of their incomes to spend on gas guzzled by diesel trucks with muddin’ tires.

The next part of our index also took laws into consideration, ones spanning a pretty broad spectrum:

And the role of party politics continues. Those same laissez-faire folks who dislike the government telling them what to do with the air they breathe also tend to disdain regulatory considerations for the time when petroleum runs out.

The South is again woefully behind the West and Northeast coasts, with the exception of Louisiana — perhaps all of those natural gas workers down there are a bit more cognizant of the rapidly dwindling supplies of fossil fuels.

Wrapping it all up — in environmentally friendly packaging

So there you have it, the states where workers leave the smallest carbon footprint in the country — with the likely eco-warriors on the West Coast leaving the smallest dent on the environment, with all of their laws and hybrid vehicles.

So what can you do to change this? Well, outside of moving to California, you can reduce your own, individual footprint by taking greener forms of transportation.

Or, if you really want to make an impact, you can try voting for politicians who support environmentally friendly laws, which will make more of a difference than a Prius.

The most eco-friendly workers in America by state