The Most Stressed City In Each State 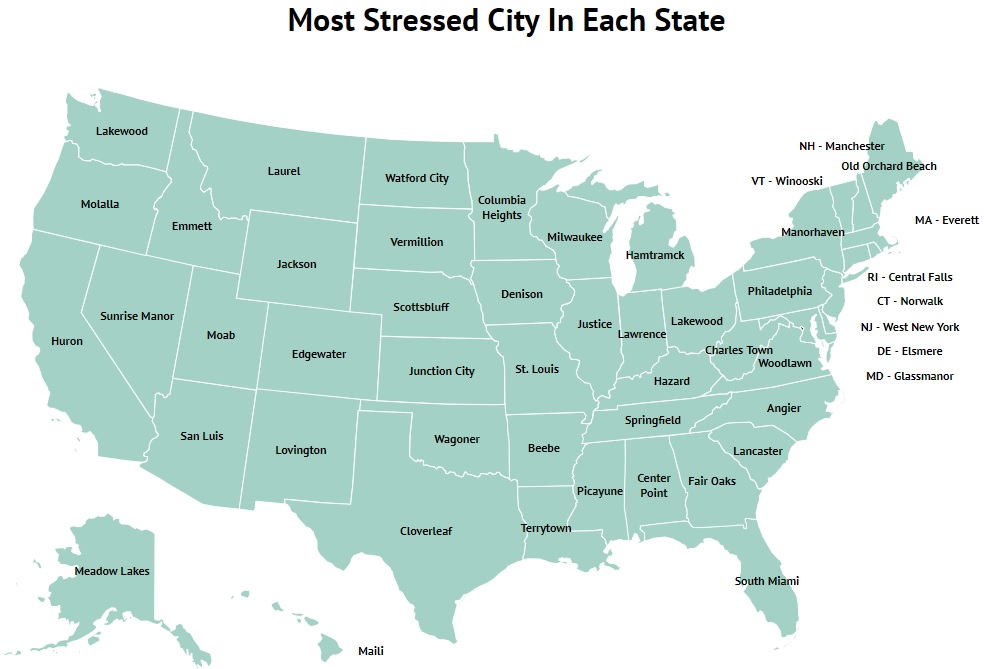 Like modern life is just a series of one stressful thing after another. Although, it is easy to think that you are the only person who is super stressed all the time, we have all been there.

On my commute to work, I often wonder if other poeple stuck doing the same commute as I am day in and day out are thinking about moving someplace where they didn’t have to waste hours stuck in traffic, working endless hours to live in a city where they can’t afford to buy a home.

Yes, where you live can totally impact your stress level. This got us thinking: What are the most stressed cities in each state? So we decided to find out.

You can find each state’s most stressed city below, but first let’s check out the top 10.

These are some of the ten most stressed cities in the United States:

Not that surprising, right? At least most of them. Florida and Colorado are the surprise elements.

How We Calculated The Most Stressed City In Each State

Using the most recent data from the U.S. Census American Community Survey for 2013-2017 and BLS, we ranked each city in America in the following criteria:

The higher a city ranked in any of these areas, the more stressed it was. We then took a closer look at each of the 50 states, and ranked the cities in each state from most stressed to least stressed.

This helped us determine the most stressed city in each of the 50 states. Huron, California either has really dedicated workers who all love their jobs, or it has the worst employers in the country, because people in Huron work incredibly long hours.

It also has the lowest average income of the 50 most stressed cities on our list. One reason could be the fact that this part of California has a large number of migrant farm workers. South Miami, Florida? This is a surprising one, we agree. All the beautiful beaches, abundant sunshine, and exiciting nightlife wasn’t enough of a stress relief for South Miamians. Long commutes, high unemployment rate, exhorbitant home prices, and large number of uninsured people put South Miami number 3 on our most stressed city. Glassmanor, Maryland has one of the worst unemployment rates in the nation. Plus, it is a suburb of Washington, D.C. Now, who wouldn’t be stressed living that close to the nation’s capital? Edgewater, Colorado is right next to Denver, and it is another one of the cities on our list that is a bit baffling. Edgewater’s close proximity nature and scenery doens’t help the fact that the city has a high unemployment rate of almost 10% and a large number of people in the city don’t have access to proper healthcare. People living in Manorhaven, New York have one of the worst commutes in the country.

With the average home price in this city being over a half a million dollars, it is no surprise it is number 6 on our most stressed list.

Number 7 on our most list is Woodlawn, Virginia. Bad commute and lack of health insurance is enough to stress out the most chill person, and people of Woodlawn are no exception.

“Peaceful, pretty, and proud” might be the motto of Justice, Illinois, but data shows that it is the most stressed city in Illinois–more so than even Chicago. Turns out super long commutes, high unemployment rate, and lack of proper health care options are enough things to cause high amounts of stress. With almost half of the population having no health insurance, Fair Oaks, Georgia is next on our list. With the median household income of just under $31,000, People of Fair Oaks have plenty on their plates to be stressed about.

Terrytown, Louisiana has a combination of factors that works against it including high unemployment rate, sizable number of uninsured people, and long work hours for relatively low median income.

Wrapping Up The Most Stressed City In Each State For 2019

There you have it–The states with the most stressed cities in America.

To see what city is the most stressed in your state, check out this table.

Detailed List Of The Most Stressed City In Each State