Applying to (Teach at) Hogwarts? Check Out This Sample Resume

by Ryan Morris
Get The Job, Guides, Uncategorized - 4 years ago 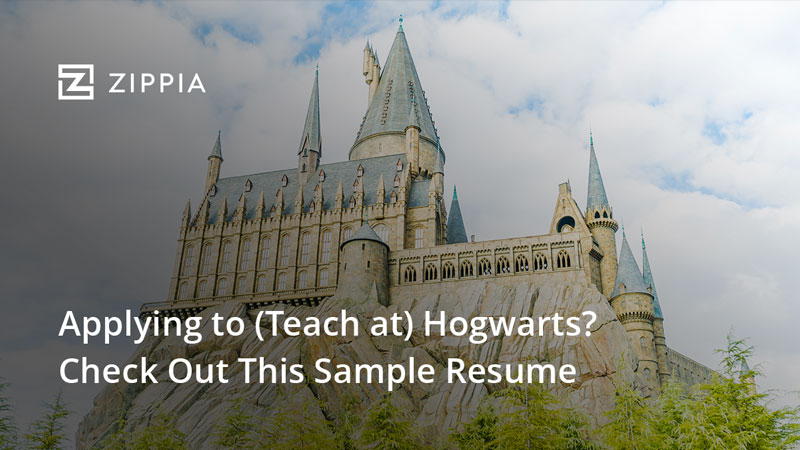 We’re big Harry Potter fans over here at Zippia, so all the career advice we’ve been cranking out lately has got us wondering: how did any of the professors at Hogwarts get their jobs?

Come to think of it, how does anyone in Rowling’s wide wizarding world get a job doing … well, anything? Job opportunities seem to be slim pickings in a world where Math and World History aren’t required school subjects, but learning how to turn a tea cup into a rat is basically a senior thesis project.

Still, pretty much every adult wizard that Harry & Co. end up encountering seems to have some kind of gainful employment. It stands to reason that they had to, you know, actually apply for that at some point.

But what would a witch or wizard write on their resume?

We were stumped. Then we checked our database of over 7 million resumes, and weirdly enough, we found one.

The following is a 100% totally real, not made-up CV for an accomplished young wizard applying to a position in the Potions department at Hogwarts School of Witchcraft and Wizardry.

As a highly motivated and educated wizarding instructor, I have proven experience teaching and designing courses within the subject of Potions.

Currently employed as a Potions Master at Durmstrang Institute. My teaching philosophy is based largely on feminist pedagogy and practices, including an examination of classroom dynamics through experimentations with room layout and student interactivity. I prefer my courses to be more of a conversation than a dictation! Strong aversion to dark magic; the odds are very low that I will be possessed by an unearthed ancient artifact, or be put under the thrall of any dark lord or lady.

Multiple course syllabi prepared, including a beginner’s level survey of the field of Potions, two higher level Potions courses (Intermediate and Advanced), and a supplementary course focused primarily on the twelve uses of dragon’s blood (Dumbledore’s seminal text on the subject forms the backbone of this exploration).

Prepared syllabi for a variety of courses within the Potions department
Graded student papers, met with students regularly to provide substantive feedback
Held lab hours, and administered practical knowledge tests based on students’ mastery of potions, including the brewing of potions, identification of ingredients, etc.
Sat on numerous faculty committees, most frequently on Durmstrang Student Housing Oversight Committee and the Campus Gardening Committee

Assisted Healer-in-Charge Smethwyck while finishing seventh-year classes at Hogwarts
Met one-on-one with patients, administered medicine (including Skele-Gro and Blood-Replenishing Potions) and healing magic under the direction of senior Healers