The States With The Safest And Most Dangerous Commutes 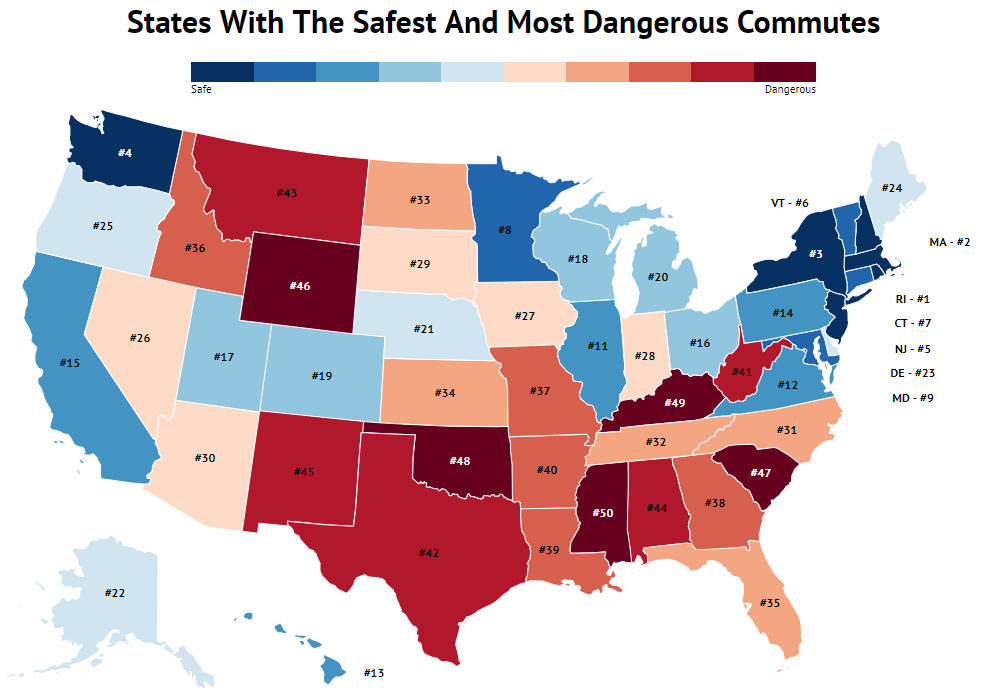 Enjoy your job, but hate the commute? So do many Americans.

While many jobs are exciting and fulfilling, the drive to and from work can make you want to switch jobs so that you don’t have to spend hours on the road per day just to get to work.

In addition to time, some commutes may be filled with dangerous drivers, making you start your day anxious and exhausted before you even clock in. Whether you work night shift or day shift, you constantly need to be aware of dangers on the road.

So what are America’s best and worst states for drivers?

How safe is your commute?

Luckily, Zippia’s research team’s got your back again and brings you our 10 best and worst states for your safety on your way to work.

How does your commute stack up?

Surprised by Rhode Island, coming in first place? The slower speeds due to traffic and the number of residents using metros may help account for their place as number 1.

Coming in last, on the other hand, is Mississippi. A state like no other, Mississippi is always full of surprises and unfortunately for Mississippi residents, your commute came in as most dangerous in the United States.

How We Determined The How Dangerous A States Is For Drivers

To create our list of top 10 best and worst states for your work commute, we collected the fatality rate per 100,000 licensed U.S. drivers from the NHTSA 2016 State Traffic Data.

This is the most recently available data believe it or not.

Using this data, we then ranked best (safest) commutes by lowest fatality rate and worst (least safe) commutes by highest fatality rates. By choosing rate per 100,000 licensed drivers versus overall fatality by state, we normalize for differences in state population, creating a more representative list for you. Population: 1,056,000
Fatalities Per 100k Licensed Drivers: 6
The smallest state comes in as our best and safest commute list. Rhode Island’s fatality rate due to car accidents is still very low, at only 6.77 deaths per 100,000 licensed drivers.

Perhaps that’s because you don’t have to drive far in Rhode Island or maybe it’s due to their no handheld device while driving law. While drinking and driving results in many accidents, so does distracted driving due to texting.

Unlike many other states, Rhode Island is ahead of the game on the anti-texting front. Stay focused, stay safe in Rhode Island. Interestingly, Massachusetts is one of two states in New England, the other being Maine, that allows you to talk on the phone and drive at the same time. Nevertheless, it is still illegal to text while driving, even when stopped in traffic or at a red light.

New England takes driver’s safety seriously and the lower fatality rates show that. So if you are working in New England, enjoy the scenery around you while you commute to and from work.

Population: 19,745,000
Fatalities Per 100k Licensed Drivers: 8
The Big Apple comes in at number three for our list of best and safest states to drive to and from work in.

Like Washington, D.C., New York has a high percentage of casualties from car accidents be pedestrians.

Considering a great many New Yorkers live in metro areas and commute via walking or metro, it is not surprising that the people greatest at risk are actually the ones not driving. Population: 7,288,000
Fatalities Per 100k Licensed Drivers: 9
Next, we head over to the west coast to Washington, that has a 9.53 fatality rate per 100,000 licensed drivers. This rate is still much lower than the national average.

Recent driving laws have banned driving while holding onto anything not necessary for driving, which includes phones, food, your morning cup of coffee, or even mascara.

While this may seem much more stringent than many states, there is a reason Washington state makes the top 5. So even though you can’t drink your coffee on your way to work in the morning, you can feel confident other drivers are also paying attention to the road, making your commute much safer.

Compared to the nation’s average of 16.9, something good is happening for Garden State drivers.

So if you are driving, relax and enjoy your trip, but also look out for people crossing the street. Population: 2,989,000
Fatalities Per 100k Licensed Drivers: 34.18
Now that we have finished our top 5 best states for commuting, we look at the worst 5 states, with the most dangerous state for driving being Mississippi.

Remember those under 10 fatality rates from car accidents? Those are long gone with the bottom five states. Mississippi is the most dangerous state to drive in with a fatality rate of just over 34 per 100,000 drivers.

Why is it so dangerous? Looking at further data, we saw that while Mississippi had a lower rate of fatalities due to alcohol (19% versus the U.S. average of 28), they also didn’t breathalyze nearly half of the drivers involved in fatal crashes.

If you commute to work in Mississippi, make sure to keep a watchful eye of other drivers on your way to work! Population: 4,437,000
Fatalities Per 100k Licensed Drivers: 27.51
Next up comes Kentucky on our list of worst states to commute to work in. While certainly better than Mississippi, Kentucky drivers still are not that safe, with a rate nearly 28 deaths per 100,000 drivers.

In Kentucky, you can talk while driving over the age of 18 and can even text while stopped. If you live in Kentucky, perhaps putting down the phone and other distractions while going to and from work may help you avoid a crash. Population: 3,924,000
Fatalities Per 100k Licensed Drivers: 27.34
Oklahoma comes in as the third worst state to commute to work in the U.S. The state has similar driving laws to Kentucky, which may explain their 28 deaths per 100,000 drivers.

However, novice drivers (drivers without a full drivers license) and bus drivers are not allowed to handheld devices at all while driving. Who knew public transit bus drivers could use their phones at any time in the past? Population: 4,961,000
Fatalities Per 100k Licensed Drivers: 27.09
We move back to the south with South Carolina. 33% of fatal car accidents in South Carolina are due to drunk drivers, which is higher than the national average.

South Carolina is actually unique in this list, in that it is one of the only states in the U.S. that hasn’t passed a statewide ban on texting while driving.

So even though you are allowed to text and drive in some cities in South Carolina, you may want to think twice about it when you head to work next. Population: 586,000
Fatalities Per 100k Licensed Drivers: 26.6
Rounding out our list of worst states to commute to work in the U.S. is Wyoming. The state is similar to the others with a nearly 27 deaths due to car accidents per 100,000 drivers.

Wyoming, however, has an interesting statistic that may explain Wyoming’s dangerous driving rates. Apparently, nearly 68% of people involved in car accidents in Wyoming were not wearing seatbelts. The national average for not wearing a seatbelt when involved in a car accident is 44%.

Although the views may be amazing in Wyoming, you should buckle up on your way to and from work– you never know when your commute may become dangerous.

So there we have it– the nation’s top five safest states to drive in during your commute to work and the nation’s five most dangerous.

Considering we spend nearly 38,000 hours driving in our lifetimes, according to a Health Watch study by Harvard, our commutes are a major part of our lives. Perhaps we should put down the coffee, the mascara, and the phone, for both our safety and the safety of others.