The Best Total Package College In Each State In America 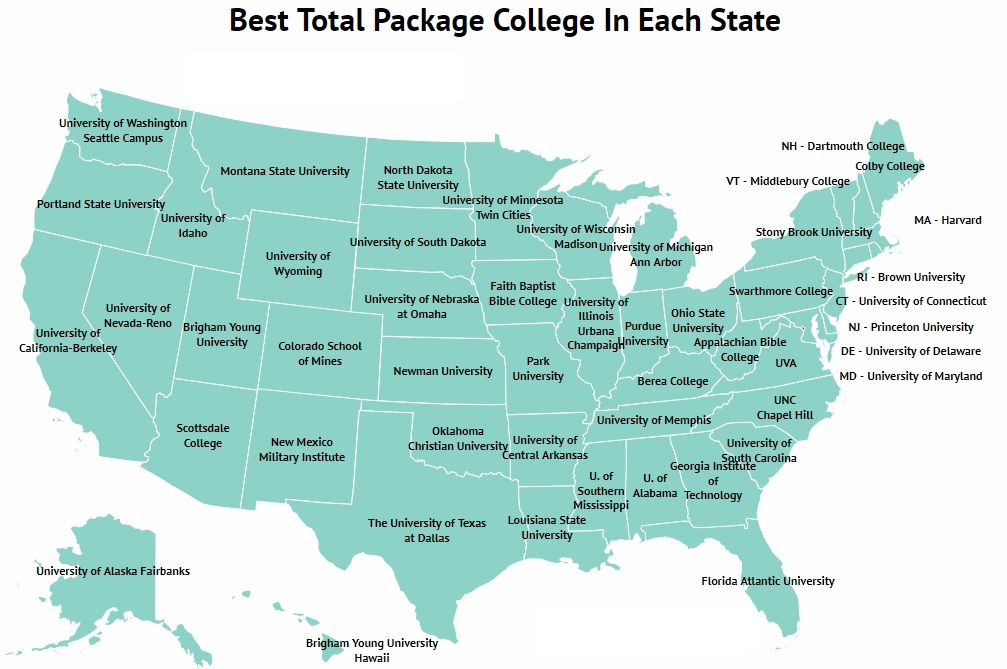 Do you know how many colleges there are in your state? If you are thinking too many, you are not wrong.

Now, what if I asked you to name the best college in your state, taking into consideration factors like cost, competitiveness, job prospects after graduation, career earnings to name a few?

You are probably hyperventilating by now.

Well, don’t. Because here at Zippia, we have the answer for you. We have the full list of the best, total package college in each of the 50 states for you, and you don’t have to lift a finger. Actually, you do have to scroll down to find out.

We wanted to give a list of the best college in each state by calculating all the most common ranking factors and the cost at which these services are provided to you.

Before you look at the best total package college in every state, here are the best of the best:

Of course, there are some very obvious ones like Princeton and Harvard that are on every list of best colleges, but there are some that you might not have considered.

We considered a number of criteria in order to get the most comprehensive list of the best college in each state. Using the most recent College Scorecard Data (October 2018) released by the Department of Education, we ranked all accredited colleges in each state from best to worst with the following determining factors:

First, here is a little more information about the best of the best:

Princeton is ranked #1 on our best of the best list for its low relative cost ($43,450 tuition), coupled with the fact that it came out at the top on every other determining criteria we used. Compare this prestigious college to other Ivy League Schools, and you will save an average $4000 just on tuition each year.

In fact, Princeton University is the cheapest Ivy League College in America.

With tremendous job prospects and career earnings ranking, Princeton University is a great school by all accounts. Being in the beautiful, diverse town of Princeton, NJ sure is a plus.

UC Berkeley is the number one public institution on our list.

It has over 40,000 students in approximately 350 graduate and undergraduate degree programs.
UC Berkeley has a reputation for being a haven for liberal ideals, and not surprisingly, The Free Speech Movement started here in 1964, and it was the first mass act of civil disobedience on an American college campus.

One of the most surprising on this list, Stony Brook University is the best in the State of New York.

We don’t see Stony Brook on many lists, because there is another powerhouse NY school that tends to make the cut–Columbia University.

But don’t worry Stony Brook, we got you.

When you factor in cost, Stony Brook topples Columbia by a huge amount, with close to $50,000 in state tuition savings annually, to be precise.

Next is the University of Washington in Seattle.

UW has been known to be a hub for innovation, and one of the innovations that came out of this campus is the color TV tube–hello there, color TV. Bubblegum is another one.

Founded in 1861, University of Washington is the one of the oldest universities on the West Coast.

Not only is UW a powerhouse in terms of academics, it has one of the best football programs in the country.

Graduates of the University of Washington have low debt and promising careers prospects.

The oldest public university in America, UNC is also one of the original 8 Public Ivies.

UNC started offering classes way back in 1795, and its incoming class consisted of one student (for the first 2 weeks).

Best known for its men’s basketball and its fierce rivalry with Duke University that is just a few miles away, UNC offers a rigorous academic program, that is on par with its Ivy League counterparts, for a public school price.

Chapel Hill, NC is a great place to live, having been named a contender for best city in numerous categories.

Officially the oldest school to award a degree in America, and arguably one of the best known universities in the world, Harvard’s first commencement ceremony was held on 1642 with nine graduates.

Harvard is expensive, and it costs about the same as most other Ivy League universities, but when the cost is considered with the other factors that we used to determine our ranking, Harvard ranks as the best in Massachusetts, and it makes it to our best of the best list.

Harvard is also known for producing some of the world’s most influential people, including eight United States presidents.

One interesting fact: since 1970, Harvard has banned commercial filming its campus so you would need to go to campus to admire this beautiful campus.

The only religious university on our best of the best list, Brigham Young University is funded, supported and guided by The Church of Jesus Christ of Latter-day Saints.

BYU is the largest religious university in America with 33,517 students that come from all different national, ethnic, and religious backgrounds.

Brigham Young University has the one of the lowest tuition costs in the country at $5150 for both in state and out of state students.

Michigan makes it to the best of the best list with the University of Michigan – Ann Arbor, scoring high on competitiveness, SATs, jobs, career earnings and low on debt.

Michigan has a huge student population totalling over 50,000 students in recent years.
President Gerald Ford and Madonna are some of the most notable alumni of Michigan.
Also, Tom Brady and Darth Vader went here.

Ann Arbor is a diverse city of 113,934 people, known for its left-leaning politics and social activism

9. The University of Texas – Dallas

UT Dallas is another surprise on this list, surpassing UT Austin as the best in Texas.

Best known for its STEM majors, it is a relatively young college, established in 1969 due to high demand for defense contractors with expertise in engineering and technology in the area.

Low tuition paired with competitive admissions process and high job placement rates puts The University of Texas at Dallas ahead of all the other schools in Texas.

Officially the youngest university on our best of the best list, Florida Atlantic University is a public university in Boca Raton, Florida.

Located in the beautiful beach city of Boca Raton, just 43 miles north of Miami, Florida Atlantic is more than just a pretty beach university–low in cost, high in career earnings and job placements, there is a reason why, when a number of factors are taken into consideration, this is the best college in Florida.

FAU is best known for its business program and for being a pioneer in the field of Ocean Engineering.

Last but not least, Florida Atlantic has the lowest in state tuition ($4831) of our best of the best list.