Which States Hate Mondays The Most? 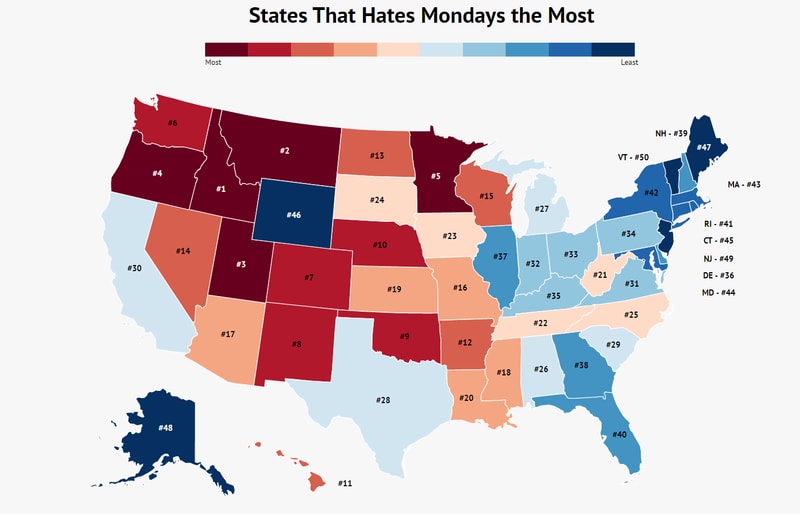 Like Garfield, a lot of people hate Mondays. It’s for good reason, too.

Monday’s just flat out suck the majority of the time. It’s a reminder that the weekend is over and that you have to suffer through another five days until you’re able to enjoy the next one.

Everything that has gone wrong in the history of ever probably happened on a Monday. While we know that’s not true, there is some science behind the suckiness that is Monday.

In fact, studies show that most people don’t have a reason to smile until 11:16 a.m. on Mondays. From drinking too much coffee to actually calling in sick, these states have the worst case of Mondays.

We analyzed google search trends to in four areas to determine the most Monday hating states:

Since searches for these types of terms tend to jump on Mondays, we determined these as the most “Monday” problems. From there, we averaged them together to find the crankiest, I-don’t-want-to-go-to-work, why-is-it-Monday-already states.

Sadly, we were unable to use google trends to find where most people were taking lunchtime naps in their car or staring blankly at their computer screens in desolation.

We assume there is somewhat of a correlation between people chugging coffee, trying to call in sick, and looking for new jobs, but can’t guarantee it.

We looked at a full 12 months of search volume, giving each state ample opportunities to reveal its inner Garfield.

When you find yourself wishing for Tuesday, you have a bad case of the Mondays. And turns out, it’s pretty common.

Maybe it’s a sign that you need a new job or that you should take a personal day. Or perhaps you need to change your weekend sleep routine to match your weekday routine so you’re not so tired on Monday.

Whatever the reason your Monday sucks, we hope Tuesday is much better.

States That Hate Mondays the Most