The 10 Luckiest States in the U.S. (And The Most Unlucky) 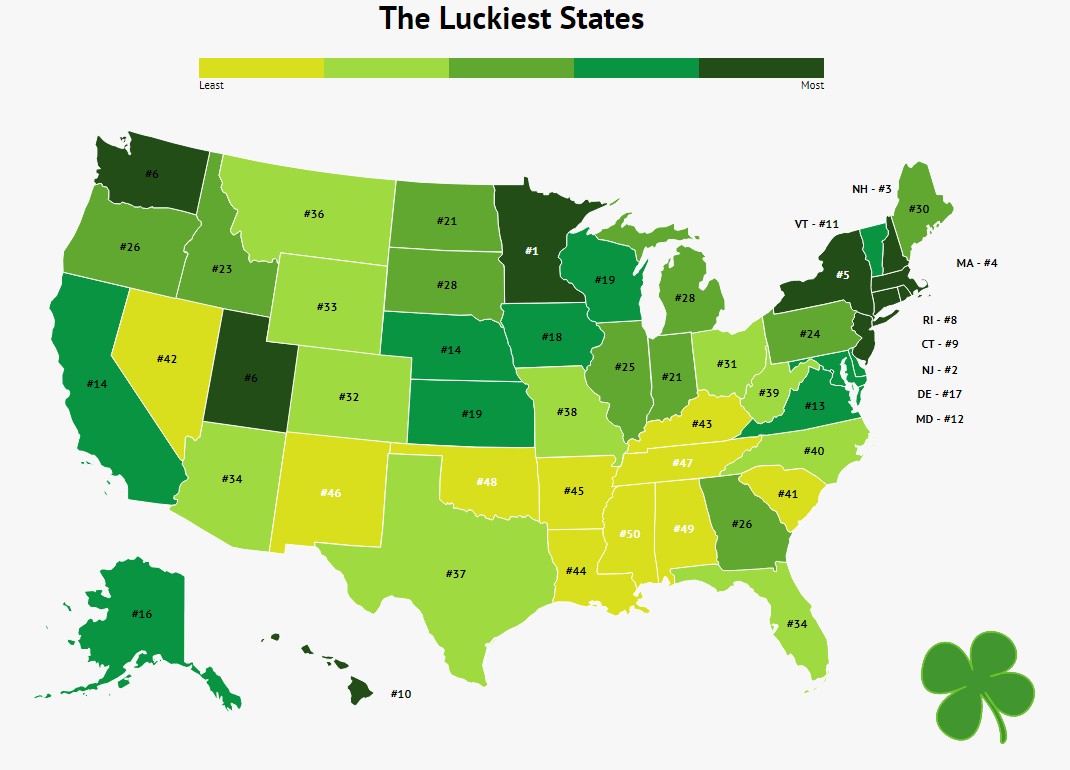 Feeling lucky? Or maybe not so lucky?

It’s no denying that some people seem far luckier than others. You know who I’m talking about, the kind of person who seems to stumble into big promotions and always wins the office raffle.

It got us thinking, are some places luckier than others? Are there even whole states where lotto tickets are more likely to be winners, people live longer lives, and inexplicably have fewer accidents?

To answer this question, and in honor of St. Patrick’s Day, we ran the numbers to find the luckiest states in the whole country.

We examined 6 factors to find the luckiest states

We decided luck could be broken down into two broad categories: Health and finances.

For finances, we started by looking at the obvious, lottery winnings. It’s hard to get luckier than random numbers and a couple of bucks making you a millionaire. For this, we combined the number of Powerball and Jackpot wins in each state. The more winners, the luckier state. Not all state have lotteries (unlucky them), so states without received the lowest rank.

Of course, everyday financial luck matters too. So we then looked at BLS‘ unemployment numbers and median household salary according to the ACS Census. The lower the unemployment and the higher the salary, the luckier the state.

From there we moved to health. After all, what is money without your health? We first examined average life expectancy according to the Robert Wood Johnson Foundation.

Of course, it’s hard to be unluckier than dying in an unexpected accident. So we included one of the largest causes of accidental death- car accidents. The greater the number of accidental car deaths per 100,000 according to the IIHS, the unluckier the state.

Under a similar vein, we looked at fatalities in a one year period from extreme weather. For this data we turned to the National Weather Service. Once again, more deaths are bad.

All factors were ranked and evenly averaged together to uncover the unluckiest states.

The luckiest state in the whole country is Minnesota. Minnesotans have an impressive life expectancy of 81, lucky years. This is helped by generally good job opportunities and a smaller than average chance of death by car accident or extreme weather.

When you think New Jersey, you probably don’t think lucky. However, New Jersey is the 2nd luckiest state in the US. What makes New Jersey so lucky? A disproportionately high number of lotto winners, strong wages and low accident risks. What happy odds.

Since New Hampshire is the most Irish state, maybe they have the luck of the Irish. That would certainly explain the low unemployment and high incomes.

If you live in New York, buying a lottery ticket isn’t quite as big of a gamble. The Empire state has had an impressive 50 Powerball and Jackpot winners. Toss in low car accident risks, and New York is looking pretty lucky.

Utah has no lotteries, but is still plenty lucky. Utah has some of the lowest unemployment in the nation. As anyone who’s been laid off or fired can tell you, that makes Utahans fortunate workers.

In 6th place is Washington. Only 6.8 people for every 100,000 die in a car accident in Washington in each year. While that is certainly unlucky for those involved, it is significantly better than the national average of 12.

Tiny Rhode Island is brimming with luck. Absolutely zero Rhode Islanders died of extreme weather according to the National Weather Service in the year examined. Compared to the 37 who passed in Texas, you can see the big difference.

In 9th place is Connecticut. Residents of Connecticut are long lived and well paid. Toss in a high life expectancy and low accident fatalities, and it’s easy to see Connecticut has favored odds.

As if living in paradise wasn’t lucky enough, Hawaiians are luckier than 40 other states. Hawaiians have a life expectancy of 82.3 years, the highest in the whole country. That gives Hawaiians a long time to enjoy their life in paradise.

And Here Are The States That Aren’t So Lucky

Now you know the states where the glass is always inexplicably half full. Even when no water has been poured.

However, not all states share their good fortune. Some states have mediocre life expectancies, even worse job prospects, and an oddly high propensity to die in car wrecks. Yikes. You can see the unluckiest of the unlucky below.

Unfortunately, these states have the cards stacked against them.

Especially unfortunate for the south, where the majority of these states are located. However, they shouldn’t feel so glum.

After all, as the philosopher Bruce Springsteen says, “When it comes to luck, make your own.” You could just be one job application away from landing a job (and salary!) that makes you feel pretty lucky. Or one lotto ticket away from not needing a job at all.

Although that one seems less likely. You can see a breakdown of the states for all 50 states, from most lucky to least lucky below.

The Most (And Least) Lucky States