The States With The Most (And Least) Debt Per Person

Zippia. "The States With The Most (And Least) Debt Per Person" Zippia.com. Aug. 24, 2022, https://www.zippia.com/advice/states-most-least-debt/ 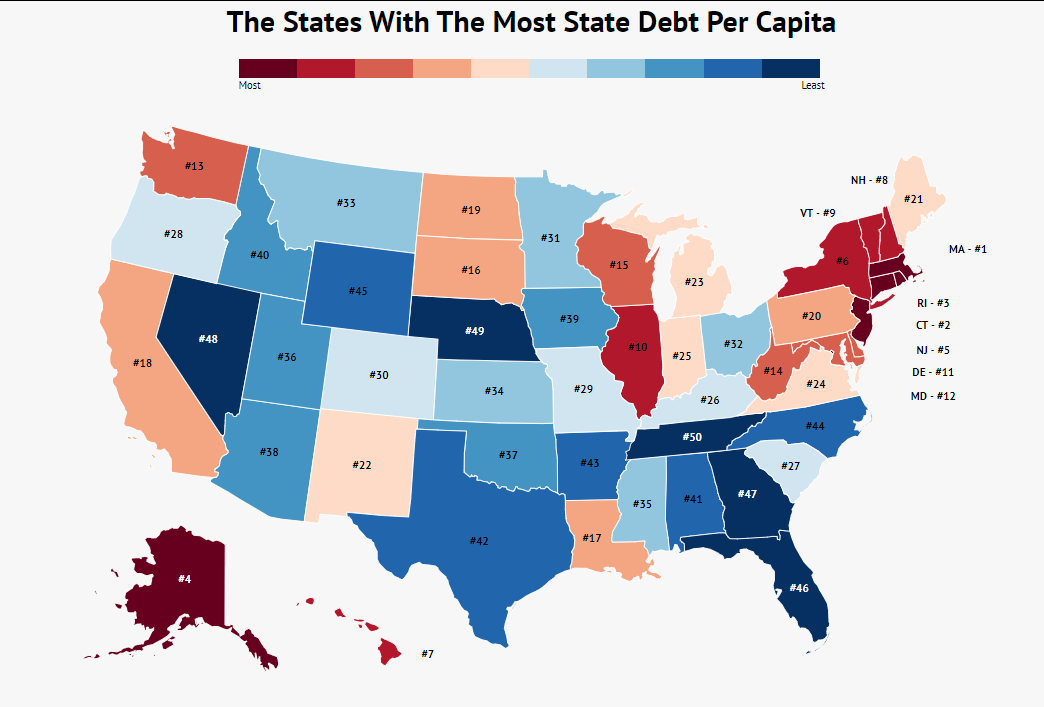 States With The Most Debt Research Summary

State debts have steadily increased over the years.

State governments have many expenses, including education, infrastructure, healthcare, welfare, and other obligations. When revenue fails to meet the budget, debt is incurred to keep the state running.

However, not all states are as equally burdened by debt than others. Some states have invested heavily in social programs. Others have cut taxes without increasing revenue. Yet, some states have

We evaluated the data to find the states with the most debt for their population size:

Massachusetts comes in 1st with $11,171 in state debt per capita, being the most indebted state government for population size.

While California has the largest size debt (no surprise with their hefty population size) and if often used as a model of too much debt, it only works out to $3,867 per person- only $62 more than North Dakota.

Southern states with relatively few social programs (including weak unemployment benefits) dominate the top 10. All 10 of the above states have under $2k in debt per capita.

Check Out The Full List, All 50 States Ranked From Most Debt Per Person To Least

HOW WE DETERMINED THE STATES With The most debt

This one was fairly simple. We used data on each state’s debt in billions from WorldAtlas, which uses data from 2017. This looks at government debt– not personal debt such as home loans or credit card debt.

From there, we simply compared the debt to the 2017 population numbers in the ACS Census. The higher the debt per capita, the more indebted the state.

SUMMARY ON THE 10 STATES With the most debt

There you have it, the 10 states with the most debt. From Massachusetts to Illinois, these states have a higher amount of debt per person than most states. These states tend to have more social support structures in place.

Similarly, the states with the least debt are overwhelmingly in the south and offer fewer or weaker social supports.

There are a few takeaways to keep in mind. These numbers are not adjusted to reflect cost of living. Cost of living can vary dramatically from state-to-state and even within a state itself. Just look at the average home price in Tennessee and Massachusetts.

Another factor to take into consideration is that these numbers are from 2017 and do not reflect the Covid pandemic or the impact of policy changes in the past few years.