The Weirdest, Most Out There Town Name In Each State 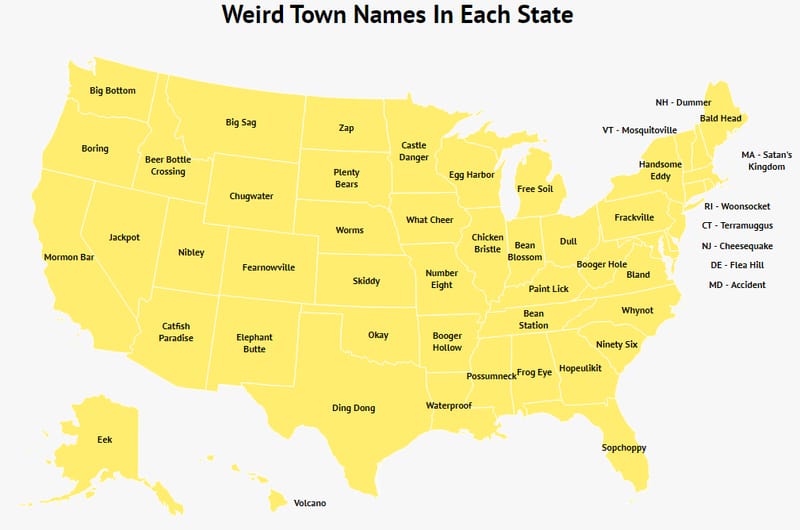 If you’ve ever been on a road trip, you’ll probably recall seeing some pretty funny town names.

It’s even possible you live in a town that has a weird name.

While there’s no clear cut way of how these towns get their names, they are normally named after a person, an administrative activity, a historical occurrence, or even a geographical feature.

We scraped the internet to find the weirdest town names in each state. Keep reading to look through the entire list.

Summary of the Weirdest Town Names

We picked out some of our favorite town names from the list. The ones we didn’t write about were just too weird to even comprehend. Seriously, though. Where’s the thought behind Fearnowville, Hopeulikit, Sopchoppy, and Cheesequake?

Weird is the Name of the Game

It’s not uncommon to find some weird town names during a long road trip. Usually, the names provide some comedic relief, which is especially important for longer drives.

Plus, these town names can prove useful during the ABC game where you find the entire alphabet using road signs and billboards, especially if you pass through Zzyzx, California.

Yes, that is a real town, and yes, it includes the last three letters of the alphabet which are generally the hardest to find during the game. Maybe these towns are named for a reason.

Despite the reason you stumble across these names, I think we can all agree that they’re weird. Be sure to check out the full list of weird town names below.