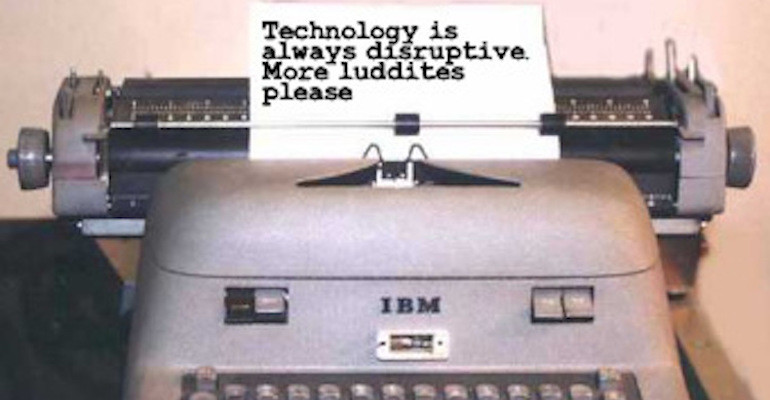 Are Recruiters ‘Luddites’ When It Comes To Technology?

I have a confession to make: I only joined Facebook about 2 years ago (having resisted for many years).

A few days after I joined, a friend of mine posted the following comment:

“There are only two people who can genuinely say they weren’t on Facebook until they became a founder of a startup. Paul Slezak and Mark Zuckerberg”.

I thought it was pretty funny.

“Are you really surprised it took him so long? Remember he’s a recruiter!”

Now I know that in our team today, I often feel like a ‘laggard’ and eyes still roll when, from time to time, I demonstrate my lack of technological ‘genius’. But I know I’m respected when it comes to my recruitment career that spans two decades.

When I first got into the recruiting game, we had no Internet. Apart from an archaic ‘database’ where a green cursor flickered against a black screen, recruitment software didn’t really exist. And never in my wildest dreams would I have believed that 20 years later I would become a cofounder of a tech startup disrupting the recruitment industry.

I have many great memories of those early days and I know I wouldn’t be where I am today without having had to learn it all the hard way … without having technology at my finger tips.

I watched in awe as technology developed allowing candidate résumés to ‘parse’ (a word I had to learn at the time!) directly into an applicant tracking system; I saw the first online job boards shake things up; I learned about ‘Boolean searching’; and of course I witnessed the major turning point for the industry – the creation of LinkedIn.

A few weeks ago RecruitLoop exhibited at HR Tech in Las Vegas and I have to admit that I was completely blown away by the plethora of technology now available to the HR and recruitment sectors. It’s absolutely incredible how much the industry has changed in the last 20 years.

So when I recently glanced over a study published by Software Advice (an online reviewer of recruiting technology) referring to recruiters and HR professionals as “luddites and laggards when it comes to using technology for recruiting”, I sat up and thought, “hang on … I better have a closer read of this”.

Whilst it may have taken me nearly 10 years to join Facebook, I don’t believe I could ever be accused of not embracing advancements in recruitment software and technology. After all, I’m part of a team creating an online platform for independent recruiters to use.

But enough about me … Here’s the big question posed in the Software Advice report:

Are recruiters in fact as technologically disinclined as some claim?

I’ll let you be the judge of that. But here are three of the key findings from the poll that I found particularly relevant.

1. 91% of recruiters use recruiting technology

I have always been a firm believer that technology alone will never place people in jobs. People will always place people; but those of us embracing technology might just do it better.

The chart below shows that of the 91% of recruiters surveyed using some form of recruiting technology or software, 89% noted that recruiting software/technology was either “extremely” or “very important” to them performing their jobs well.

I seriously have no idea how a recruiter today could possibly operate successfully without (for example) having access to an aggregator to post ads on to multiple job boards; broadcasting temp assignments out to their talent database via their smartphones; shortlisting candidates via video interview; or automating the reference checking process.

How does the mystery 9% of recruiters surveyed actually not use technology? I’d really love to know!

2. Most say the benefits of recruiting technology outweigh the costs

Even if recruiters do need to pay for the software or technology they use, the expense seems to be worth it.

When Software Advice asked recruiters who do use technology about their perceived return on investment, 93% felt that their recruiting software and technology was either “extremely” or “very beneficial” compared to the costs.

Look at this chart.

I am certainly not saying you need to embrace every possible piece of recruiting technology.

For example there is software available that helps create content for job ads. I personally wouldn’t invest in that since not only do I enjoy writing job ads, but I do it pretty quickly and I know I can write a job ad better than any algorithm.

But knowing how much time I could save shortlisting candidates by investing in video interview software … well for me that’s a no brainer.

I have to be careful what I say here, since for pretty much my entire career, I have always been involved (at least in some way) in training recruiters in any new software or technology we were implementing across the 2 businesses I worked in before RecruitLoop.

I believe that given the right training (or even just the ability to access a ‘power user’), then any new technology should be easy to understand and implement.

As you can see from the chart below 95% of recruiters surveyed either “strongly” or “somewhat” agreed that it was easy for them and/or their team to learn how to use their recruiting software/technology.

There are some really interesting stats in the Software Advice report. But as a recruitment industry veteran (yes … that’s how I am often referred to these days!), I am so glad the findings revealed that recruiters and HR professionals could well have been inappropriately labelled “luddites” when it comes to recruiting technology.

[Infographic] Video Interviews: The New Frontier of Job Interviewing
How to Alienate the Best Talent
Register for Our Upcoming Workshops - From Hiring to Firing
Recruiting Is A Professional Service. Value Your Time Like It.
Why it's Essential to Assess Software Skills During the Hiring Process
Social Media and Customer Service [Infographic]