The Best States for Working Families 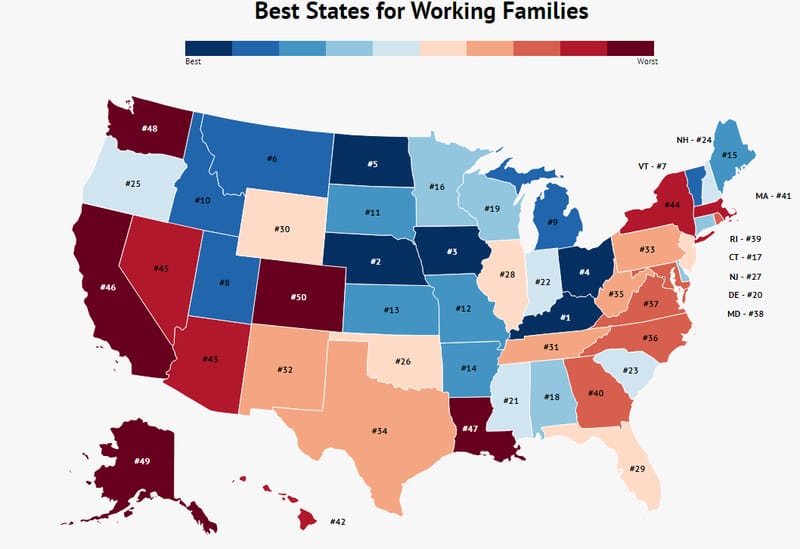 The middle class isn’t like it was 20 years ago.

During that time, working families were expecting their children to make more than them when they grew up and started careers. Now, that story is completely different.

Instead, those children have grown up, started careers and are struggling. Why? Despite inflation, the median income for middle-class families hasn’t changed in those 20 years.

In addition, the middle class is struggling to save for retirement. Between paying for a home and daycare costs, most of the middle-class families are relying on borrowing money rather than saving it.

However, some states treat working families better than others. We set out to find the states where childcare is affordable, owning a house isn’t just an American dream, it’s a reality, and workers have more free-time.

The Best States for Working Families

If you’re looking for some great family-friendly places to live that will allow you to start saving for your retirement, these states are a great place to start. Be sure to continue reading to find our complete list of which states are the best, and which ones are not so great.

The factors we looked at can be put into two categories: Time and affordability. Trying to balance working and raising a family is hard- it strains your free time and your wallet. We sought to identify the states where working families have a bit more extra cash in their pockets and a little extra time mom or dad can use as they please.

For time, we used data from the Census’ ACS to determine the median commute length and the average amount of hours worked. The less time spent on the freeway or on the clock, the better for work-life balance.

For affordability, we first looked into daycare costs, using data from businessbroker.net. In many states, daycare is more expensive than college and a burden to working families. To determine where working families were struggling to afford childcare, we compared the percentage of median income to the average daycare cost in each state.

We then examined the median housing cost in each state, once again from the ACS. While you don’t need a house to raise a family- many people enjoy the space and privacy it affords. Not to mention, homeownership is a cornerstone of the American dream. 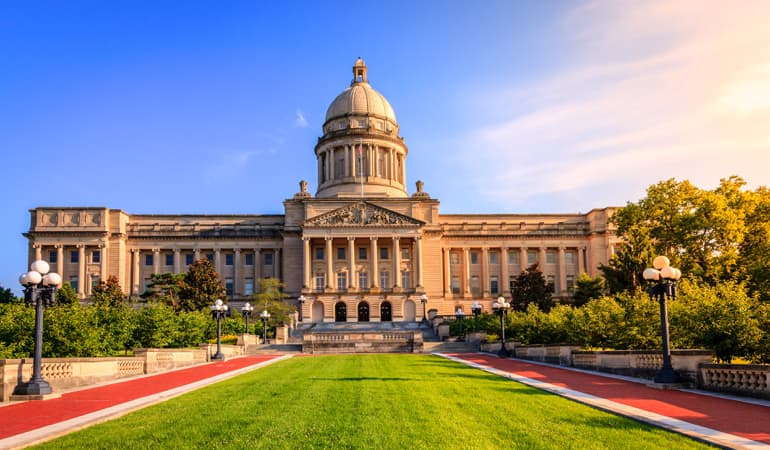 Kentucky comes in ahead of the game with being the best state for working families. From working 39 hours a week to only 17% of family monthly costs going toward daycare, it’s easy to see why it’s such a great place for families. Perhaps the most family-friendly aspect of this state is its average home cost of $135,300. That’s the fifth-lowest in the country! 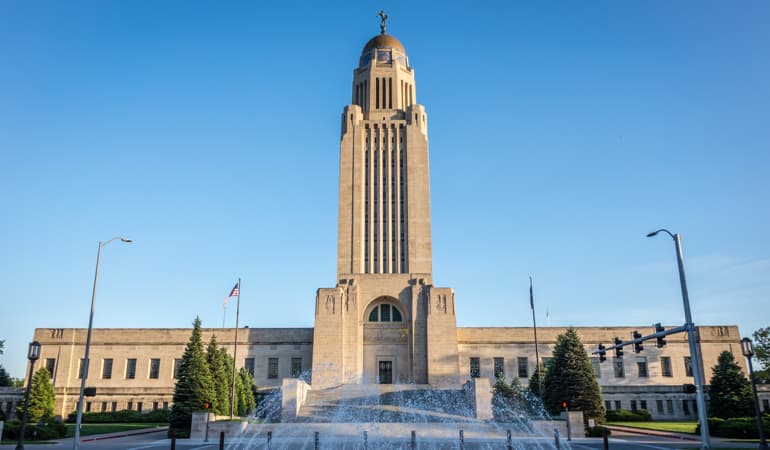 Nebraska comes in second when it comes to providing a family-friendly atmosphere for middle-class families. While an average home only costs $147,800 here, the best part is the commute. The average commute in Nebraska is 18.6 minutes, which just happens to be the fifth-shortest in the country. That puts you at seeing your family much sooner, rather than later. 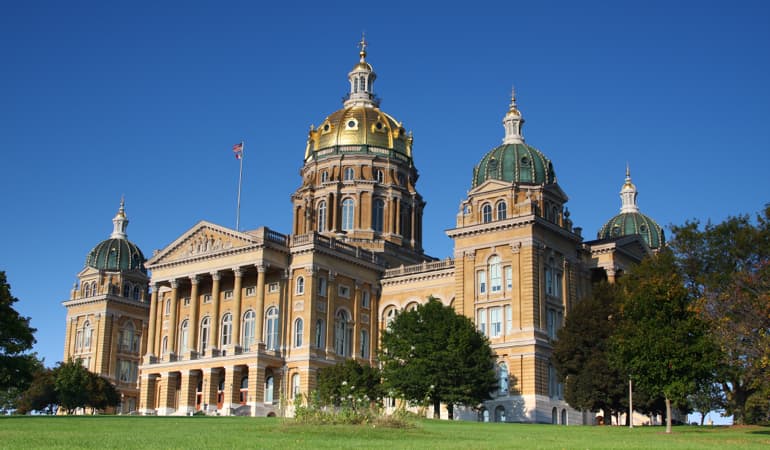 The third best state in the U.S. for working families is Iowa. From daycare only taking up 19% of the monthly costs to only working 39 hours a week, the state wants to make sure you’re able to take care of your family while being able to spend as much time with them as possible. A nice little bonus of living here is that homes average $142,300, which is the ninth-lowest in the country.

With the eighth-lowest average home cost of $140,000 in the U.S., Ohio pops up at No. 4. The state also promotes a life-work balance with the average workweek being only 39 hours. Your family may get tired of spending so much time with you in Ohio. 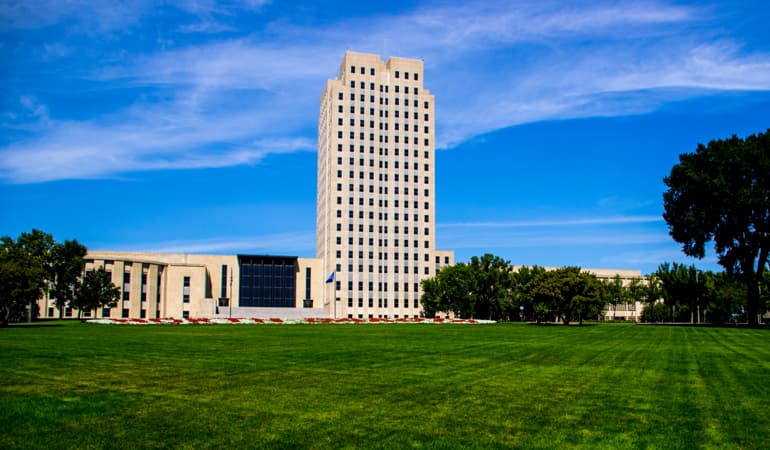 North Dakota is the fifth-best place for working families to reside. This isn’t surprising, especially since daycare costs only take up 16% of the monthly bills. Plus, the state has the second-lowest average commute time of 17.1 minutes.

Montana is next on the list. What makes this state so great is its average workweek. Most people here only work 38 hours every week, which is the fifth shortest workweek in the U.S.

In addition to having access to fresh maple syrup, Vermont is great for middle-class families for other reasons as well. A major one that comes to mind is that the average workweek here is only 38 hours, which ranks Vermont No. 2 in the country. So you definitely have time to enjoy some waffles while you’re there.

With lots of outdoor activities to do with the family, Utah is eighth on the list. Don’t worry, you’ll have plenty of time to teach your kids how to snowboard, especially with the average 37-hour workweek. The workweeks here are the lowest in the U.S. 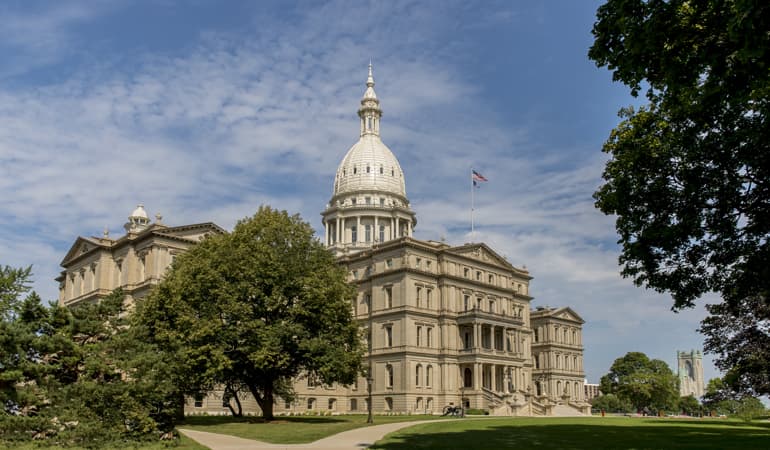 Michigan comes in at No. 9. While the average daycare costs only account for 19% of the monthly costs, that’s not the best thing about this state. Actually, the cost of homes is what’s turning many middle-class families’ heads. The state averages $146,200 homes, which is the 11th lowest out of the rest of the states. So now, you might be able to start a college fund for your kids.

The last state we’re going to talk about here is Idaho. At No. 10, Idaho still has some impressive stats that draw in a lot of working families. The average daycare costs only account for 17% of the monthly bills here, which is the ninth-lowest percentage. Another impressive feat is the state’s average commute, which is 20.7 minutes, also ranking the state ninth best. Saving money on daycare and gas doesn’t get any easier.

Summary of the Best States for Working Families

If you’re looking to move to a more family-friendly state, or you just want to save a little money for a college fund or retirement plan, these states couldn’t get any better. From low daycare costs to short commutes and everything in-between, these 10 states are the perfect home for working families.