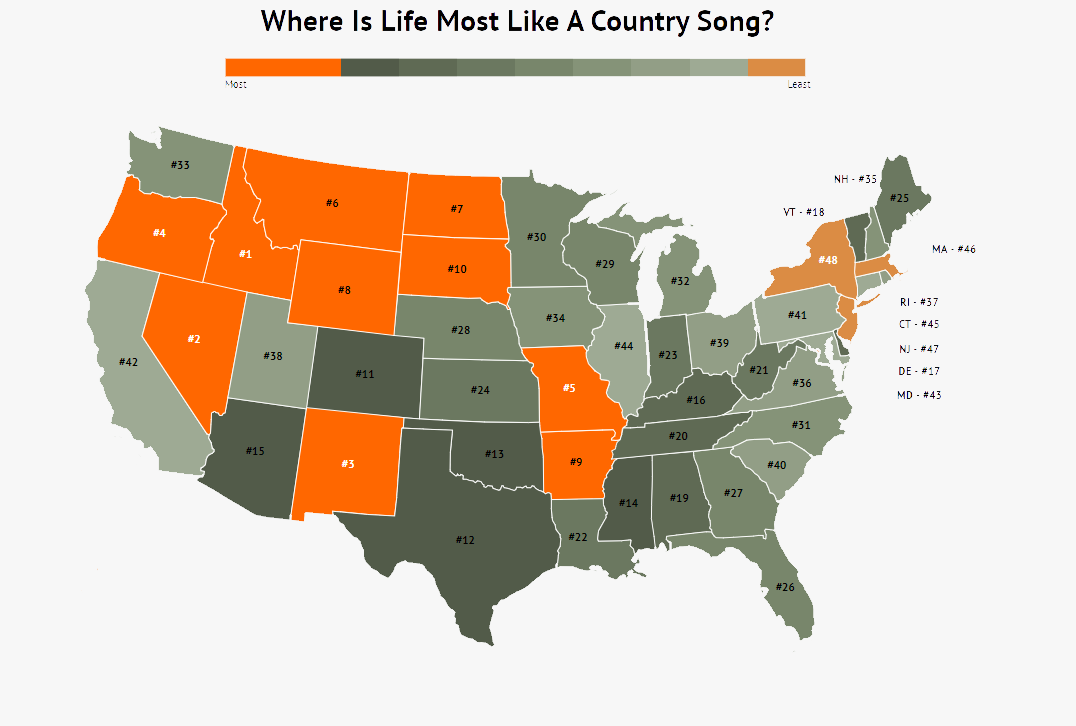 Some of ya’ll city slickers sure like big, bustling cities.

But ya’ll might just be overlooking the sweet, simplicity of popping open a cold one on some country acres, a dog at your feet and some good tunes playing from the radio. What’s playing? Country music, of course.

It got us to thinking…where in the US is most like a country song? Sure, it’d be easy to assume it’s in the South, but as the poet Brantley Gilbert once said, “in every state there’s a station playing Cash, Hank, Willie Waylon.”

So we set out, using common lyrics and themes to find where country music isn’t just a song– it’s a way of life.

How We Figured This One Out

What happens when you play a country song backwards? Your wife comes back, you find your dog, and your beer is full!

Using this witticisms, we looked into gallons of alcohol consumption (using data from ), the percent of households that own a dog (American Veterinary Medical Association), and the percent of married couples that divorced last year from the ACS Census.

Of course, perhaps the biggest theme in country music is the way of live– and having the space and freedom to live as you choose.

Using this vibe, we added population density (once again using data from the Census, to find the amount of people per square mile). While we can’t guarantee these are the states with the most bon fires and people driving trucks down dirt roads, they certainly have the space to.

Unfortunately, our data only covered the continental US and excludes Hawaii and Alaska. However, the remaining 48 states were ranked equally.

These States Walk The Line

The Devil may have went down to Georgia, and the song Sweet Home, Alabama may be something of an anthem, but as you can see on the map, the west is where country songs reign supreme.

Where doesn’t appreciate the twang and strum of a guitar? The Northeast, with quite a few coastal states joining their ranks. Oh well, more tequila and acres for the rest of us!

You can see a full breakdown on our data below: