Survey: Why Do People Quit Their Jobs? 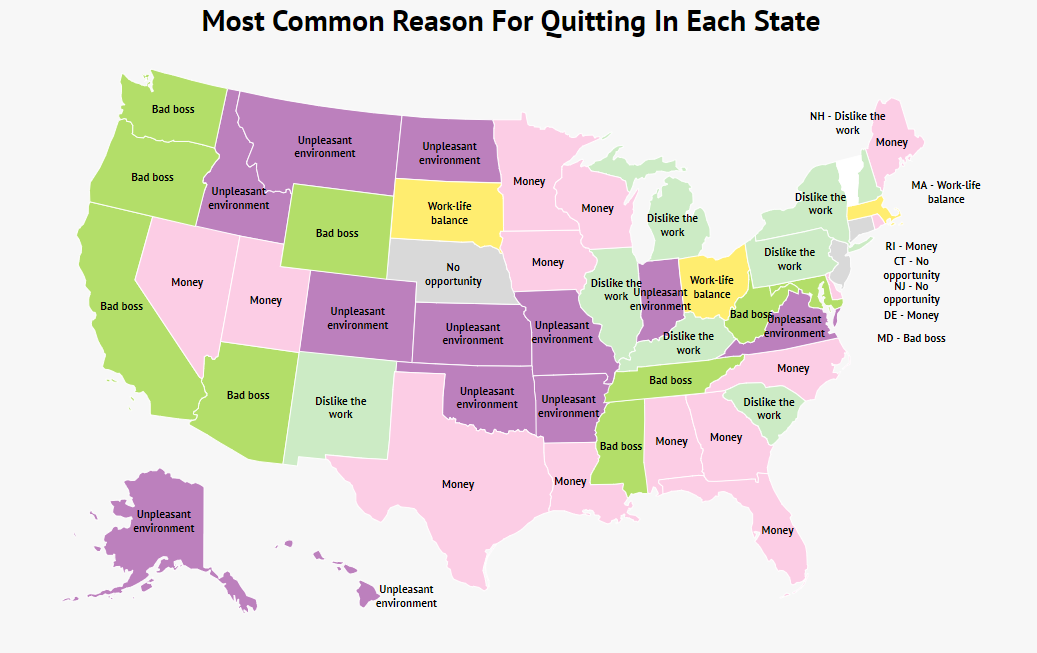 Is it money or a new, swanky title- aka “better opportunities?” Could it be workers are seeking something deeper? Like work-life balance and a job, they find fulfilling. Or maybe the old adage, “people don’t quit their job, they quit bosses” is true.

We surveyed 2,000 US workers to better understand what drives workers to quit- and just maybe, what might help them stay.

The results? Money matters, but it isn’t the only factor that has workers polishing off their resumes. 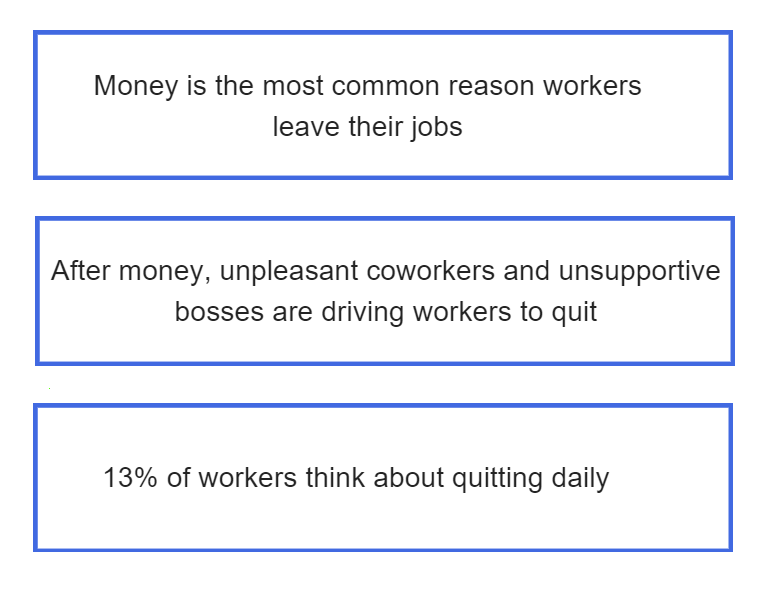 Why People Quit Their Jobs

Since most people go to work to earn a paycheck, it’s not too surprising money is the main motivator to look for greener pastures.

However, money isn’t the sole reason workers quit. In fact, over 60% of workers admit unpleasant work environment, an unsupportive boss, and work they don’t enjoy will hasten their departure from a job.

Life is short, but doing work you hate with people you don’t enjoy, will make the hours of 8-5 feel a lot longer.

Other Common Reasons Why People Quit Their Jobs

The most interesting response? Inciting incident. While most workers are leaving for better opportunities or due to long-term dissatisfaction, one incident can leave some workers to say, “Goodbye!”

While that inciting incident might be an unforgettable workplace confrontation, it could also be a dismissive comment or a moment of disrespect. As one worker put it, “Once I realized my boss had so little respect for me, I couldn’t stay.”

We left off some uncommon but fun answers such as “hungover,” “spring break,” and the “new Call Of Duty game.” When you don’t have a mortgage or future career aspirations at your job, Panama City Beach might be all the reason a worker needs.

Zippia.com, a career resource website, conducted a study of 2,000 workers across the US to better why workers leave their jobs.

Each respondent was asked a series of questions about their motivations for quitting and job history. Vermont was excluded due to sample size.

Movies and tv shows often depict workers quitting in flashy, dramatic scenes. While those happen (shout out to the 40% of workers who, at one point in their life, have impulsively quit a job),
those aren’t the typical quitting story.

Most workers carefully plan out their departure and consider all of their options.

In fact, 42% of workers wouldn’t voluntarily leave a job without another lined up. Bills and financial responsibilities are funny that way.

Yet, even while devoted employees don’t ever think of quitting their job, a not insignificant number of employees think about quitting daily or weekly.

What can employers do to retain these employees? While money, the most common reason, might be a good step in retaining workers, it won’t magically fix retention issues.

Many workers leave for multiple reasons- a lot coming back to them not enjoying their job or coming into work.

It can take a lot of money to make someone smile. Companies seeking retention might find it cheaper, if more complicated, to examine the cultural issues that are contributing to high turnover.

Most Common Reason For Quitting