Sloppy, Casual, And Too Much Skin: How Workers Dress For The Office 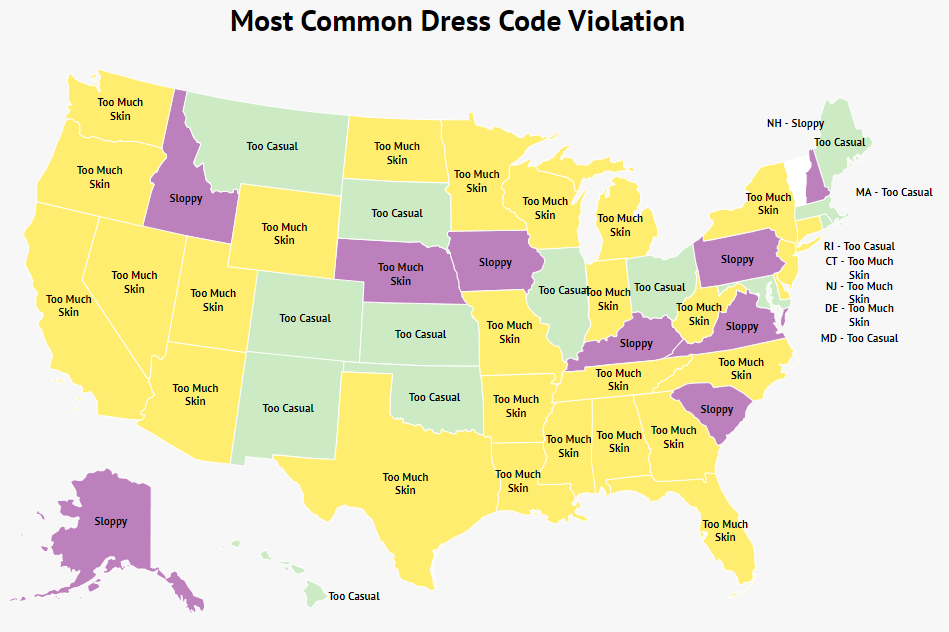 Dress to impress. Or maybe just some jeans and a wrinkly button up?

What to wear to work is complicated. While some workers toss on a uniform in the morning, others are forced to shell out big bucks for their business professional clothes.

Some count themselves lucky to get “jeans Friday” and other workers are trying to hide their tats under that polo.

We surveyed over 2,000 American workers to find out what they wear to work, even when they shouldn’t.

The results? Skin for days, wrinkles galore, and every day is casual Friday for some workers. 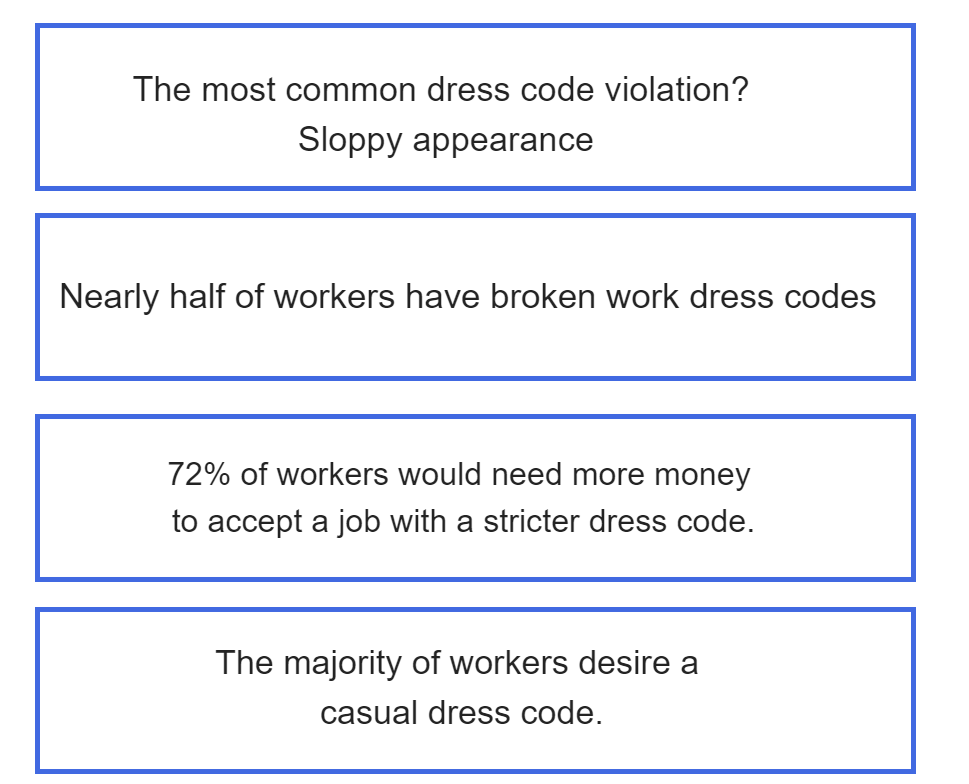 How Do Workers Want To Dress For Work? 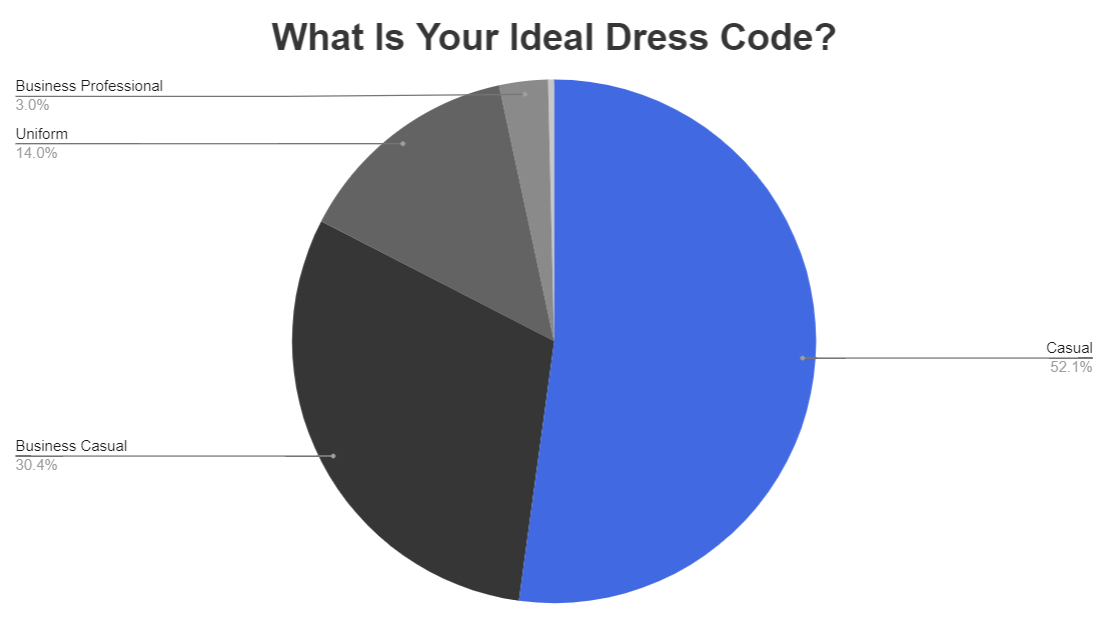 The majority of workers(52%) want a casual work environment. Judging from the overwhelming enthusiastic yeses to jeans and tattoos in the workplace, this comes as no surprise.

Right behind casual, 30% desire most a business casual work environment. Which turns those jeans into khakis and that sick Marvel shirt into a respectable polo.

Another 14% of workers enjoy wearing uniforms. While business casual and other dress codes might result in a surprising amount of time hemming and hawing at the mirror, uniforms remove the grey area and can save you money on clothing expenses. 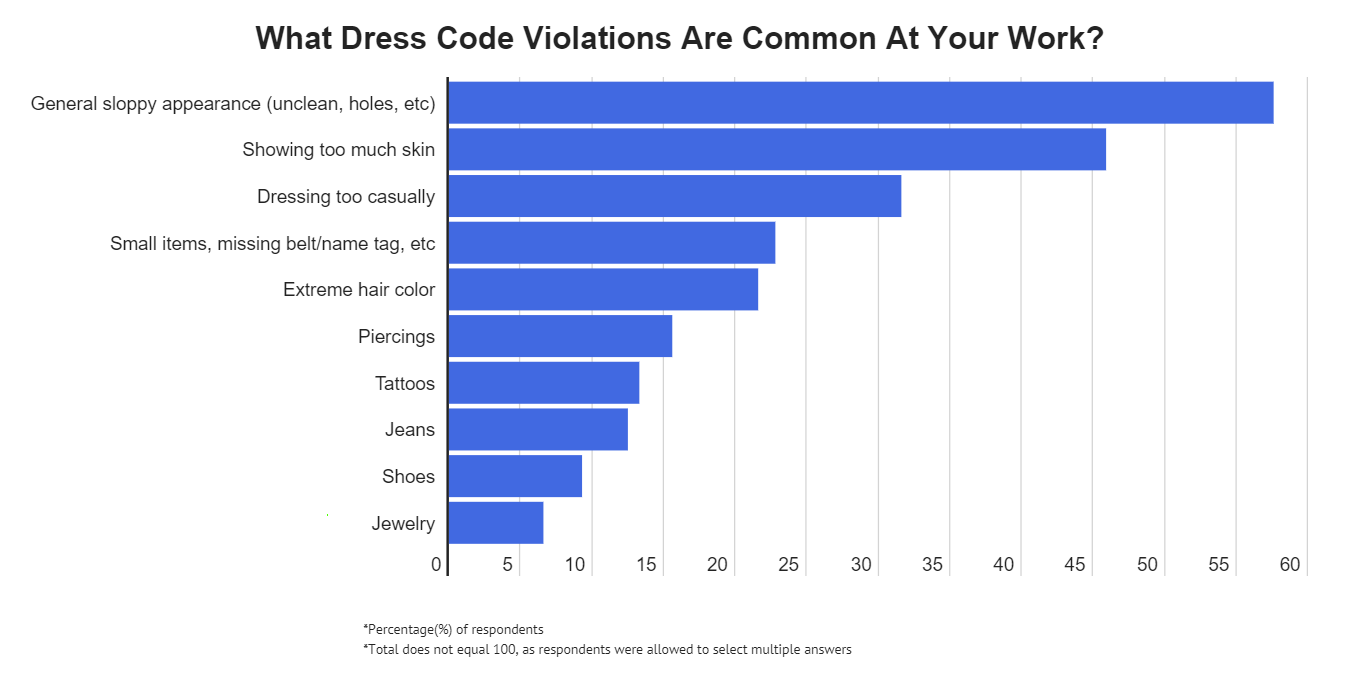 The three most common dress code violations are generally sloppy appearance, too casual, and showing too much skin.

While these are objective (casual to you and casual to Karen in Accounting might be very different things), it is clear many workers aren’t a fan of their work’s dress code.

In addition to the big 3, workers are bending the dress code with piercings, tattoos, footwear, and basically every other conceivable thing involving getting dressed. Below you can see some other ways workers are breaking dress code.

One thing is clear, many workers don’t find their dress codes important to follow. In fact, 47% of respondents admitted to breaking dress code.

To better understand why workers are not following dress code, we asked what problems they had with it. The results were illuminating.

The vast majority of people who dislike their dress code explained it was expensive to follow, unnecessary, and uncomfortable to boot.

Others pointed out racially insensitive dress codes, or discrepancies for workers based on gender causing resentment.

Over half of our respondents found flipflops and crocs inappropriate for the workplace.

Others were uncomfortable with open toe shoes and shoes without socks. I will let you ponder the implications on that.

Overall, what type of footwear is appropriate for work depends on your job. You don’t want your ER doctor running to your code in heels.

However, if your investment banker is wearing crocs, you might doubt their judgement a little.

Zippia.com, a career resource website, conducted a study of 2,165 workers across the U.S. on work attire.

Each respondent was asked a series of questions about their current work clothing, as well as their general thoughts and feelings on dress in the workplace. Vermont was excluded due to sample size.

At the end of the day, one thing is clear: The majority of workers desire a more casual workplace.

Yes, that includes jeans and tattoos. Undoubtedly this trend will accelerate as more tatted-up, jean loving, young workers enter the workplace. While this won’t help boost the struggling tie industry, it might increase employee satisfaction.

However, even as casual Friday becomes everyday, workers should keep in mind they are at work.

You don’t need to dress in business clothes if that is not appropriate for your office work environment. However, even in a t-shirt and jeans, you still want to maintain a neat, professional appearance.

That means clean, unwrinkled clothes that don’t hinder your job performance. With that being said, if you’re working remote, go ahead and throw on those stretchy pants.

How Each State Is Showing Up To Work

Articles In Interview Attire Guide
Never miss an opportunity that’s right for you.