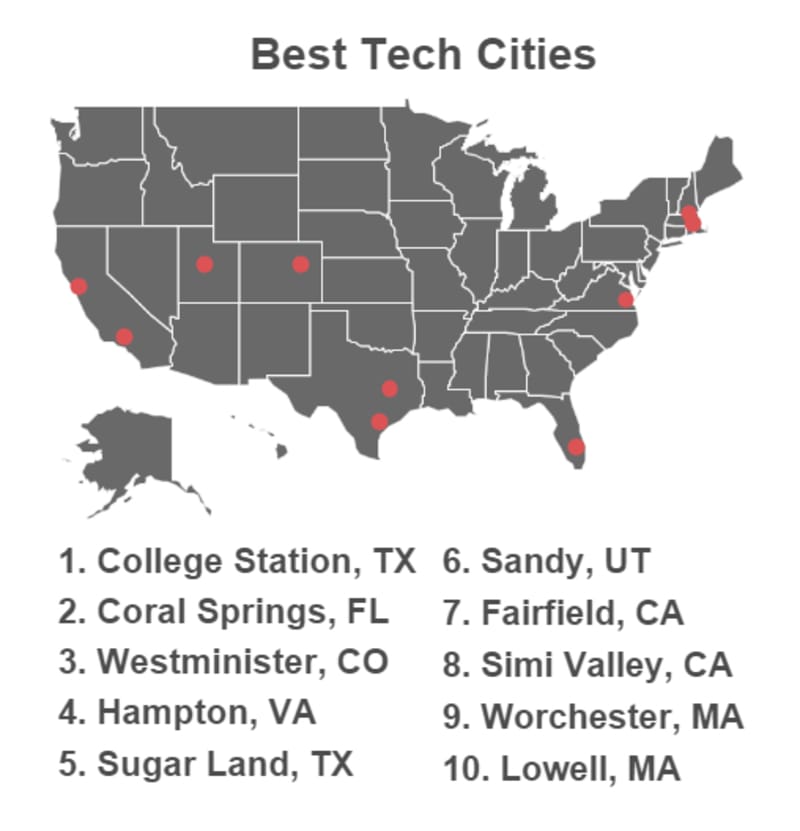 Are you dreaming of fixing computers or even designing tech for NASA, but not sure where to apply?

While California is a great place to start for the tech job scene, we’ve also found some other tech hubs that might suit your lifestyle better.

The state may have held the tech spotlight for a while, but now the jobs are expanding to other areas of the country.

So if you are interested in pursuing a tech job just know that you do have other options.

In addition to our top 10 techie cities, we also compiled a list of 100 tech cities that can be found later on in the article. So if any of these locations aren’t your cup of tea, you know you still have lots of options. This list gives you the freedom you need to be a techie where you want to be a techie.

First, we chose to examine the increase in tech jobs to see which cities were seeing the biggest boom in tech jobs. The more rapidly jobs are added in your field, the more opportunities available and the more desirable you are in the job market. This factor was weighted 200%.

We measured tech jobs using information from the Census’ ACS. We simply determined the number of residents who have jobs in computer science, engineering, and other technical fields. This does look at who lives in a city, and some of these workers may be commuting to other cities for work.

After that, we examined the overall percentage of tech workers who call a city home. While growth is great, if that 100% increase is a handful of workers, it’s not that impressive. Plus, the stronger tech community is a promising sign of future startups and growth, in addition to valuable collaboration. College Station, Texas comes in first on our list of best tech cities. When it comes down to it, College Station has seen more growth in this career industry than most other cities in the U.S. In total, the city offers 7,763 total tech jobs. If the West Coast wasn’t doing it for you, maybe it’s time to switch to the East Coast. Coral Springs, Florida has experienced the third most tech growth with 163.25% in the country. Offering 6,247 jobs in the tech field, you’re sure to find your place here. Coming in hot at No. 3 is Westminister, Colorado. This city offers 6,941 total tech jobs, which translates to 10.6% of all jobs there are within the tech sector. What’s even more promising is the fact that the industry has seen 61.98% growth. As one of the cities that’s seen a recent growth in the tech industry, Hampton, Virginia, is fourth on our list. The city has experienced 59.85% growth for a new total of 6,883 total tech jobs. That’s 11.3% of the city’s workforce. Texas is so big it has 2 cities that are up and coming in the tech sector. Sugar Land comes in at No. 5. The city has one of the highest percent of tech jobs with 12.8% of its workforce dedicated to the tech industry. That percentage boils down to 7,533. With those kinds of odds, you’re sure to find something to do here. The No. 6 spot is secured by Sandy, Utah. The city has recently seen a 60.12% job growth in the tech industry. Even with that growth, Sandy still only offers 4,906 with accounts for 9.5% of its workforce. Finally, a California location. Fairfield has seen the seventh-highest percent of tech growth in the entire country with 108.96%. Still, the city only offers 4,083 jobs in the industry. Round two for California is Simi Valley which comes in as the eighth-best city for tech geniuses. While it’s only seen a growth of 46.66% recently, the city still offers a whopping 6,054 tech jobs.

Worcester, Massachusetts comes in at No. 9. As the 19th city to have seen the most tech growth recently, the city offers lots of career opportunities for tech professionals with a total of 6,226 jobs. That number stems from a 67.77% growth and will surely continue to climb.

Yet another duplicate state, Massachusetts is an up and coming hub for tech careers. In Lowell, there are 4,239 jobs within the industry, which makes up 7.6% of the city’s workforce.

Some refer to tech junkies as geeks or nerds, but we know you’re much more complicated than that. That’s why your job search shouldn’t be complicated. With our list of the best cities for tech jobs, we’ve made it simple so all you have to do is point at the map and go.