The Best Place For Jobs In Each State 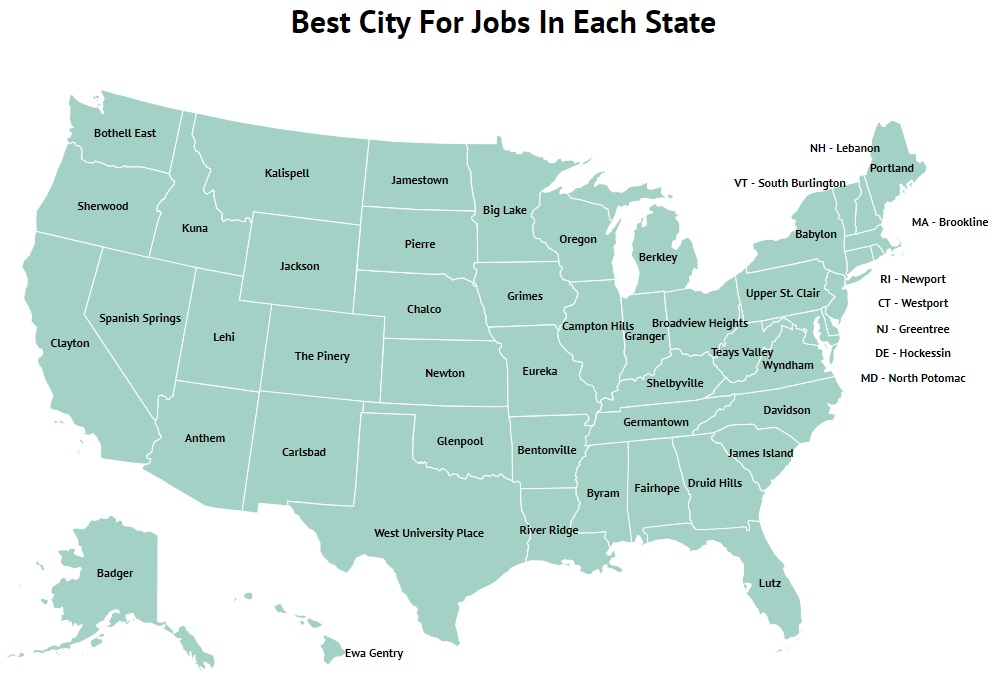 What is the one thing in life that causes you the most stress?

Look at any survey, you’ll notice jobs on every single one of them.

Now imagine having little to no stress when it comes to jobs…Feels good, right?

We thought the same thing, and that left us wondering which cities were the best for jobs. Specifically, which city is the best in each state when it comes to jobs?

We decided to dive deep into this question, and we have the answer for you. We looked at a number of criteria to determine the best city in each of the 50 states.

Here are the 10 best of the best for jobs:

Did you have the same reaction to this list as we did–like, where are these places? Never heard of them.

Yes, some of these can come as a surprise, but fear not, because I am about to tell you exactly what put these cities on the top.

How We Calculated The Best City For Jobs In Each State

We looked at the PUMS data from 2012 to 2017, and compared the year over year numbers for the following:

We also looked at the current rate of unemployment and current income levels when determining the ranking.

We then ranked every city in all 50 states from best to worst for jobs to calculate the best city in each state for jobs. Nestled among the rolling hills and limestone of southwest Missouri, Eureka has small town feel, but it is actually a suburb of St. Louis. Beautiful parks, affordable housing, and low crime rate make this Missouri town a great place to live.

Add to this the fact that this city has seen a consistent decline in unemployment rates and boasts a high median income of over $100,000, the city of Eureka, MO is number 1 on our list. Campton Hills, IL is next on our list, and this one is a suburb of Chicago.

It is more a “village” that provides its residents with great lifestyle that includes jobs that have amazing benefits and handsome wages; that coupled with low unemployment rate make Campton Hills a great city for jobs.

Bothell East, WA has one of the lowest unemployment rates in the country, and no wonder it is one of the top cities for jobs and the best for jobs in Washington state.

This city is again is part of a large metropolitan area, this time the State of Washington.

The Pinery is located between Denver and Colorado Springs and is surrounded by three state parks. Jobs and nature = Adult bliss

Next on our list is North Potomac, MD, a town located 20 miles from Washington, D.C. It is close enough to a large metro area to be great for high paying jobs and low unemployment rates, but still far enough away from D.C.’s rush and craziness. Hawaii is called paradise for a reason, but we’ve all heard how expensive it is.

However, if you can manage to move to Ewa Gentry on the island of Oahu, you might be able to enjoy this paradise state. Another suburb, this time a Houston suburb, West University Place, TX has one of the highest median income in the country–$220,868. No surprises here, people have kickass jobs in this city. Sherwood, OR is a beautiful suburb of the wonderful city of Portland, and this rainy city is lush not only when it comes to its landscape but also jobs. Low unemployment rate, affordable homes, and satisfactory median income make this gorgeous city the best for jobs in Oregon. Babylon Village is number 9 on our best city for jobs list, and it is the best city in the state of New York.

Located approximately 25 miles from New York City, Baylon is best known for its restaurants, shops, and the Gilgo beach.

The last one on our top 10 list is Greentree, NJ, which can be described more as a township than a city. Regardless, this is the best place in New Jersey when it come to jobs owing to its low unemployment rates, affordable homes, and high median income.

A good percentage of these cities are suburbs of major metropolis, and that is not surprising. Jobs are more likely to be abundant in big cities, and that can be seen here too.

The cities on our list not only give you an idea on how good they are in terms of jobs and income, but they are meant to give you a sense of how the jobs and affordability add up to give you a more holistic view of the city and the lifestyle you can afford.

Feel like moving to one of these cities? I’m with you. Check out which city in your state is the best for jobs.

What’s The Best City For Jobs In Each State?